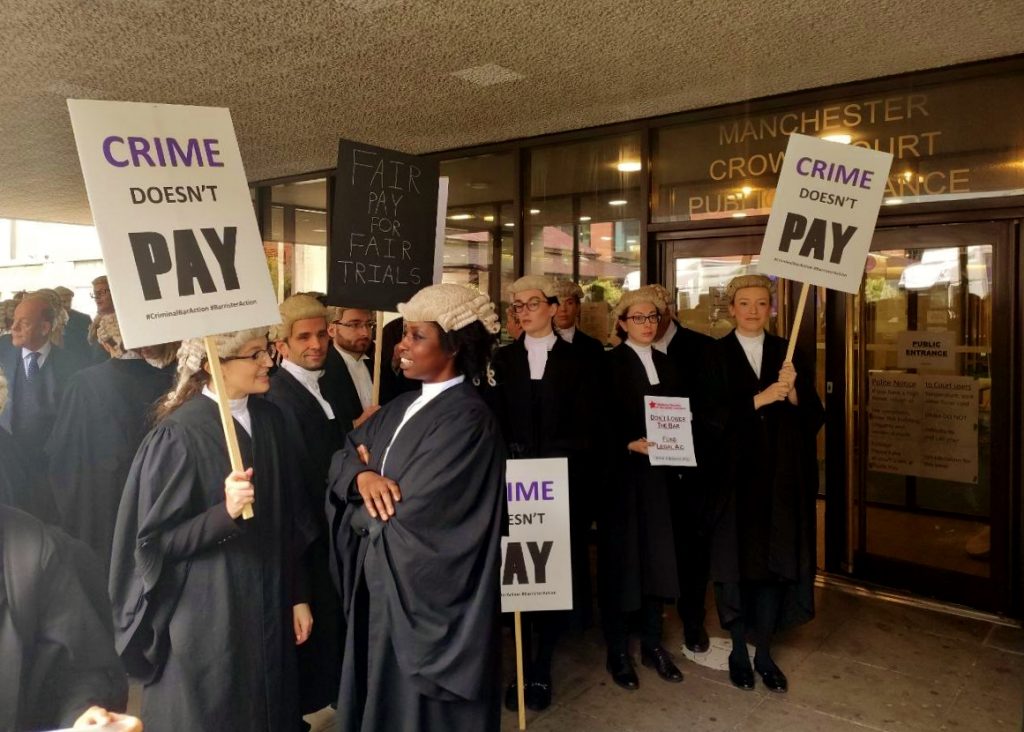 On Monday 27 June, criminal defence barristers in the Criminal Bar Association went on strike over pay and conditions. Though barristers are often assumed to be well-paid, there is increasing inequality between barristers taking private work and those reliant on public funding through Legal Aid – usually representing low-income Defendants. The average early-career barrister taking this form of work is paid less than minimum wage.

The next strike day is on Monday 4 July, and periodic actions are planned until their demands are met. Here, explaining the reasoning for the strike and correcting common misconceptions, is Rosalind Burgin, a Manchester-based criminal defence barrister and executive committee member with Legal Sector Workers United.

Criminal barristers on strike outside Manchester Crown Court in the first of a series of strike actions, Monday 27 June 2022.

Who are barristers and who do they work for?

Barristers are lawyers who carry out a wide range of work but often specialise in physically representing people in court. In Crown Court trials, the barrister will usually be the person in a wig, asking questions of the witnesses and making speeches to the jury.

Most barristers are self-employed. This means we receive a fee for each specific case we take on rather than receiving a monthly or annual salary.

Most barristers are members of ‘Chambers’. Chambers act like a kind of managing agent; bringing in work, managing diaries and sorting out billing. Chambers are paid by receiving a percentage of their barristers’ fees. Barristers are not employees of Chambers.

This means that union membership is not straightforward, and the way we are paid can be complicated.

Background: what is Legal Aid and how does it affect this strike?

Legal Aid is the type of funding which pays for legal representation for people accused of a crime (‘Defendants’) when they can’t afford to pay a lawyer privately. It is an important democratic principle that anyone accused of a crime must have access to lawyers who help to make sure the arrest, investigation and trial are fair. If the court decides that someone is guilty, criminal lawyers also make arguments on what should happen next in terms of rehabilitation and punishment (‘sentence’) and support an appeal if a decision needs to be challenged.

Legal Aid exists so that this is something everyone has access to, not just the wealthy. Defendants in criminal cases are up against the powers of the State: the police, the Crown Prosecution Service, and the potential to be imprisoned. Defence barristers fight their corner throughout the process, whether they’re guilty or not. Arguably, a victim of a crime can only be sure that a conviction of a Defendant has been fair and safe if the Defendant has had proper representation throughout.

Why are barristers striking?

The short answer is: Legal Aid is too low and this is causing a crisis. Criminal barristers are leaving, which means there aren’t enough barristers to keep the courts running. For cases that we do take on, we are overworked and under unacceptable pressure. This affects everybody accused of a crime, as well as witnesses, victims and loved ones of everyone in the system.

It’s hard to argue with the figures:

In the first three years of the job, full time criminal barristers earned a median pre-tax profit of £12,200 in 2019/20. As a comparison, the average median household income in the UK for the same year was £30,500.
In 2019/20, 27% of barristers who had been in full practice criminal work as recently as 2018/19 were no longer full practice criminal barristers.
The number of new practitioners (barristers 0-2 years in the job) in full criminal practice has decreased each year for the past 3 years. In this same period, the number of New Practitioners who have left full criminal practice has increased by 86%.
567 trials in 2021 were postponed at the last moment because there were not enough barristers.
Before the pandemic, there was a court backlog of 41,000 cases. Now, there is a backlog of 58,000 cases.

Add on to this the long hours and long distances, the often chaotic and short-notice workload, the fact that we are self-employed and pay our own expenses, the years of unpaid and expensive study it took to get here, and the fact that that new barristers in 2019 had average median debts in the range of £20-£29,000, it’s obvious that we have a crisis. Criminal barristers are not paid enough, which means we cannot stay in the job, which means there are not enough barristers to keep the courts functioning. Even where there are barristers, we are forced to take on an overwhelming workload to make ends meet, putting an already challenging job under impossible pressure.

Who called the strike?

The Criminal Bar Association (‘CBA’) is not a union, but it is an organisation with approximately 2,400 criminal barrister members.

In June 2022, 81.5% of balloted CBA members voted for days of action. These are days where barristers who are paid under a defence Legal Aid Scheme (the ‘Advocates’ Graduated Fee Scheme’ or ‘AGFS’) will not attend court, starting with two days on 27 June 2022, and escalating each week until a five-day walkout from Monday 18 July 2022. After this, barristers will walk out of court every other week until the government makes reasonable proposals.

In addition to these walkouts, barristers will refuse to accept new AGFS cases, regardless of what date the hearings are on. They will also refuse to cover any AGFS hearings or matters for other barristers who need to drop them for any reason.

The Independent Review of Criminal Legal Aid (‘CLAR’) was published in November 2021. The findings were damning. The Chair of the Bar said: ‘The conclusion could not be clearer; urgent additional funding is needed if the entire system is not to face collapse with the profound societal problems and loss of confidence in the justice system that this would cause.’

The government has responded by proposing a 15% rise in AGFS fees. The CBA’s position is, rightly, that this can’t be accepted. For a start, a 15% increase on the junior median income of £12,200 per year isn’t going to bring pay up to the minimum wage. Further, the government’s proposed increase would come into force for new cases from the autumn of this year. This means that the increase wouldn’t apply to any of the backlog cases. Barristers only get paid once cases finish, which can take years, so we wouldn’t see the effect of any increase until at least the end of 2023. Spiralling inflation could have extinguished the 15% increase by this point in any event.

The CBA is asking for at least a 25% increase to AGFS fees, not least to reverse the collapse in our average fee incomes by 23% at the height of the pandemic. CBA members have also voted for the following demands:

That we get paid for written work (at the moment, we are only paid for court appearances, whether we spent days or weeks on paperwork beforehand or not);
Additional fees in ‘section 28 cases’, which is where vulnerable witnesses and victims have evidence recorded in advance of the trial. At the moment, we are not paid for this extra work; and
For an effective pay review body supported by index linking.

Is it only defence barristers who are angry, or is there also discontent amongst prosecutors? If there’s a difference, why?

The current strike is focussing on a particular Legal Aid scheme for defence barristers: the AGFS. Many barristers do a mixture of prosecution and defence work, so there is no clear divide between ‘prosecutors’ and ‘defence barristers’.

Prosecution fees tend to be higher, and a recent Justice Select Committee report found that the imbalance between prosecution and defence pay causes increasing unfairness in the system. However, underfunding is chronic and devastating in all areas of the criminal justice system.

Why do you think there is such a big gender and race pay gap for junior barristers?

The statistics on inequality at the bar are shocking:

The reasons for this, as is often the case with inequality, are complex because criminal barristers all work under the same ‘schemes’. It is not the case that barristers from different backgrounds are paid different fees.

These inequalities are more likely caused by problems with who gets ‘chosen’ for the better-paying work, and problems with who has access to it. Anecdotally, I have heard of senior women barristers getting ‘stuck’ on relatively low-paid sex offence or youth court cases, whereas often white male colleagues end up on high-paying fraud or organised crime cases. A 2016 Bar Standards Board report quoted: ‘The male members of chambers take the (all male) clerks for a drink and that informal friendly relationship percolates through to the work environment and work allocation’, and ‘Junior male Members of Chambers are promoted and supported to get their names ‘out there’ in a way that female Members of Chambers are not, so that even before the work is assigned, there is discrimination at play’.

The same 2016 report noted that many barristers felt that taking maternity or parental leave had had a negative impact upon their practice, on the work they were chosen for, their career progression and their income. Research participants also talked about being disadvantaged by power structures within Chambers: members from minority groups raised how intimidating it was to challenge Chambers’ decisions on policy, practice and, particularly, the fees barristers pay Chambers and how they are calculated.

How can members of the public and other organisations support you?

Support from across the legal sector has been overwhelmingly positive. We need pro-active support from all workers, not just barristers. The trade union branch Legal Sector Workers United is collecting signatures from others in the sector who support our demands: you can sign it here.

Visible support on our pickets makes a huge difference. On Monday 4 July 2022, barristers are assembling at 9am outside:

Support from other workers has a wonderful impact. Last week, the RMT came out in solidarity with the London picket and were warmly welcomed. We will continue to meet at courts around the country each Monday until reasonable proposals are made.

This last week, we have seen the government launch a concerted war of misinformation. They have been misquoting a junior barrister’s salary by including private and non-criminal fees in their figures, making it appear much higher. They have been misquoting how many barristers voted for action, making it seem much lower. This means that public statements of support from other organisations would be a great help in showing that our message is coming across despite their best attempts to spread misleading facts.

Rosalind Burgin is a barrister in criminal defence and housing law at Garden Court North Chambers. She is also an executive committee member for Legal Sector Workers United, the legal sector branch of the United Voices of the World union. You can find updates on the actions being taken on the Criminal Bar Association’s website here.