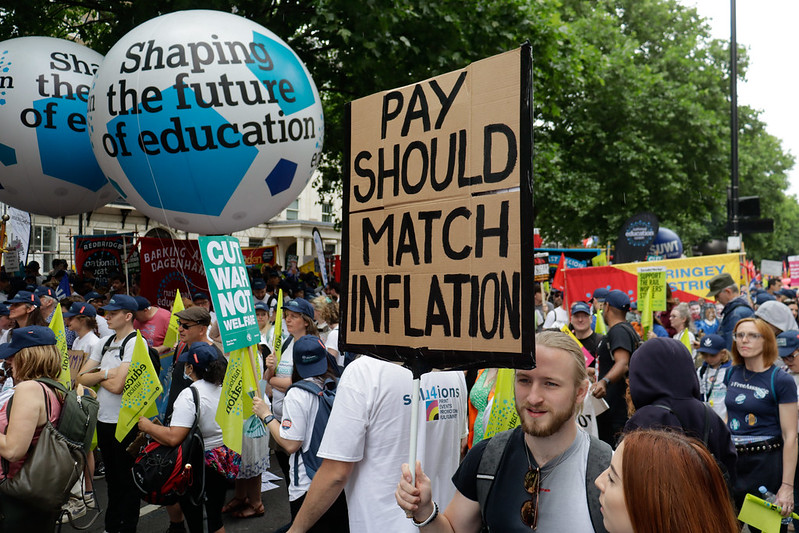 The real causes are global factors like Covid and the war in Ukraine, not forgetting corporate profiteering, writes Kate Deer. So demand a pay rise now!

Prices are rising at the fastest rate for decades – we all feel the pinch when doing our weekly grocery shop and paying our energy bills. That is why many workers, who haven’t seen their pay increase for years, are asking for a pay rise. But Tory politicians and the governor of the Bank of England have urged us not to ask for more pay, warning that it will lead to a wage price spiral which will make inflation even worse.

Dishing out that sort of advice, when you are on a six-figure salary, takes a certain level of chutzpah. Boris Johnson was on more than £160,000 a year and will now receive handsome severance pay while the Governor of the Bank of England earns more than half a million per year. But besides the obvious hypocrisy, the argument also makes little economic sense.

Here are a few reasons why:

Wages haven’t increased for the past ten years, yet inflation is rising

The most important argument to tackle the claim that higher wages cause inflation is a simple look at the facts. Real wages (which means inflation adjusted), have fallen for more than a decade and so has workers’ share of corporate income since the 2008 crisis.

Adjusted for inflation, wages are now lower than they were during the 2008 crisis. Yet inflation in Britain has already risen to more than 9 per cent. So how exactly have higher wages caused this crisis? Accepting a pay cut in this situation will do nothing to bring down prices, it will simply increase corporate profits.

Wages didn’t cause prices to rise in the 1970s either

The spectre that is always brought up when people ask for better pay is the period of the 1970s, when inflation in Britain stood at 25 percent. But the factors leading to a rise in inflation back then were much more complex. One key factor was the Yom Kippur war between Israel and Arab states led by Egypt and Syria, which sparked the 1973 oil crisis and caused commodity prices to rise sharply.

It’s true that at the beginning of the 1970s, workers’ salaries outgrew inflation, a sign that their collective bargaining power was much better than it is now. But from the mid-70s on, inflation overtook wage growth.

The 1973 oil crisis, the pandemic and the war in Ukraine were all global events which disrupted supply chains and caused commodity prices to soar. They had nothing to do with pay disputes in individual countries. This explains why inflation is on the rise across many different countries at the same time.

Since the 2008 crisis, central banks have injected unprecedented amounts of money into the economy, through quantitative easing, the purchases of government and corporate debt and by other means. The Bank of England alone has bought nearly £1 trillion in debt, whilst the balance sheet of the US Federal Reserve has increased ninefold, to just over $9 trillion. Central banks have also kept borrowing costs at record low for more than a decade.

Of the trillions injected into global financial markets through quantitative easing, very little has trickled down to ordinary people. Instead, these policies have simply inflated financial markets. Now that inflation is on the rise, central bankers believe that they can control it by increasing interest rates. The assumption here is that by making borrowing more expensive, they can reduce consumer demand and bring prices down. However, mainstream economic consensus now seems to be that this might involve engineering a recession and a surge in unemployment.

If you sign up to the theory that inflation is caused by an overheated labour market and workers asking for too much money, which mainstream economists do, then a spike in unemployment would be considered a necessary evil to bring down wages and ultimately inflation.

The trouble is, because inflation isn’t caused by rising wages, these measures will not only do very little to control inflation, they will also cause further economic hardship to many ordinary people who are already struggling with a cost of living crisis.

The rise in interest rates won’t affect banks, who will transfer the higher borrowing costs directly to consumers. In fact, bank profits have increased sharply in the third quarter of 2021 and at the beginning of 2022, in part because banks have increased interest rates on debts. More than 90 per cent of household debt in the UK is mortgage debt. Increasing the interest on this debt by only a small percentage can massively increase borrowing costs.

In short, banks aren’t losing sleep over rising interest rates, but ordinary people with debt will.

Prices are going up because profits are rising

Most economists agree that inflation today is caused by a breakdown of supply chains and the closure of factories, first due to Covid and then the war in Ukraine. As a result, prices for commodities and a lot of intermediary goods have shot up. But there is another factor, which hasn’t been addressed sufficiently, and that is the question of profits.

Just like bank profits, corporate profits more generally have actually soared during the last three years. Profits for FTSE350 firms have shot up by 73% since 2019, with energy firms in particular benefiting from price rises. One of the main factors driving inflation right now is price gauging – big corporations hiking prices of goods to anticipate further price rises.

Simon Roberts, the CEO of Sainsburys complained recently about his competitors: ‘We are inflating behind the market, our direct competitors are inflating ahead of the market.’ It is in the nature of capitalism that corporations will continue to do so, because they are driven by competition and the profit motive.

Corporations like energy firms and big supermarket chains will not sacrifice profits voluntarily, they will have to be forced to do so by us. So rather than talking about the wage price spiral, let’s talk about the price profit spiral and how we can break it in our favour. This would involve increasing corporation taxes and income taxes for the richest and actually enforcing that those taxes are being collected.

To sum all this up, the current crisis has shone a spotlight on all the economic injustices we have endured over the past few decades. Capitalism means unprecedented wealth generation and the concentration of that wealth in the hands of an ever-smaller elite, and at the cost of a decaying planet – it’s unsustainable.

We now have a system where more than $10 trillion of cash has been injected into financial markets, but vital essentials such as butter and baby formula are marked with security tags because so many people can no longer afford them.

So the conclusion is that you should ask for a pay rise. Don’t lose a second of sleep over whether this will cause prices to rise. UK bank executives earn in the range of £3.6 million per year and the CEO of Shell took home more than £6 million just last year. Boris Johnson is expected to make millions off book deals and speaking engagements in the months to come. Do you think they worry for a second about how this affects inflation? They don’t, and neither should you.

And if you do ask for a pay rise, make sure you don’t do it alone. Speak to your colleagues about how much they earn, join a union and negotiate collectively. As Bob Crow once said: ‘Spit alone and you can’t do anything. But if we all spit together we can drown the bastards.’