Home / News / A Bus Journey to a New Wales 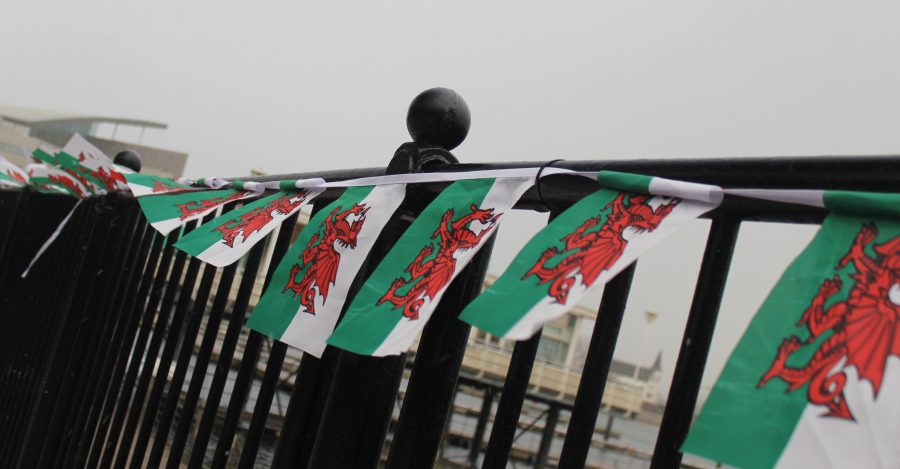 A new anthology on Wales and Welshness charts a course from the country’s invented traditions towards a plural future.

A woman in niqab sits on a bus in Wales quietly talking to her son in another language. A man sitting nearby tells her that, ‘You’re in the UK, you should be speaking English.’ An older lady sitting in front of them turns around and replies, ‘She’s in Wales and she’s speaking Welsh.’

— Hanan Issa, ‘Have you heard the one about the niqabi on a bus?’

My first ever visit abroad was in 1994, when I had been granted a British Academy scholarship to spend a month in Wales. A week in Swansea, two weeks in Aberystwyth and several days in Bangor—all three towns where the colleges of the University of Wales had been situated. Upon finishing my stay in Aberystwyth, one November morning I took a bus to Bangor. Despite the terribly early hour, I tried not to fall asleep, but the views in the bus window were so sublime and spectacular that although twenty-something days spent on admiring the Pure Beauty of Welsh Mountains should have made me used to them, I struggled not to surrender to vulgar biological needs.

Moreover, I was waiting to catch a glimpse of Machynlleth, the place where Owain Glyndŵr established the first Welsh parliament. Machynlleth, the first big stop on the route. I was alone on the bus. Beautiful mountains and valleys were unhurriedly moving in the window, and the rhythm of the ride finally lulled me. I was awoken by a strange hiss. First I decided that the bored driver had decided to entertain himself by imitating an irritated snake, but then I realised that he was just trying to announce the next stop. MacAntlet, Makhnnnslkhhhh, Mkhnslthssss. He failed better and better till the final surrender: ‘Mkhhhhhhhhhhh’. The driver was English; we had a breezy conversation before boarding.

Another bus story which is supposed to be funny, like the one I’ve used as the epigraph to this review. Both are about language as the marker and the tool of power: political power, cultural power, ethnic and racial power. The English bus driver in 1994 tried to follow the rules and even to be polite to the country he was working in, struggling to pronounce a local place-name in a local language. He failed. Approximately twenty or twenty-five years later an English passenger—in the disgusting manner typical to all xenophobes around the world—failed to recognise the local language (and the country itself). The Welsh language became the line of division between ‘Real Wales’ and these men. But the problem is that they, the polite bus driver, and the despicable racist passenger, are part of Wales. They are Welsh. In other words, all these people with their different backgrounds, different religions, different habitus, different views on everything—all of them are Real Wales.

That is why this book has the most precise title: Welsh (Plural). It is about many various ‘Waleses’, about many various people living in them, but ‘Welsh’ as a language, or actually Welsh as the language, is the point towards which everyone in this country has to construct their attitude. Welsh always presents in your mind, often by the very fact of its absence. I will return to this major subject of the book later, but now I ought to say another couple of words about buses.

Both stories about Welsh—my personal story and the apocryphal story retold in a brilliant personal essay by Hanan Issa—happened on the buses. A cobweb of bus routes and the Welsh language are probably the strongest networks which keep this ever-divided entity together. If you want to travel from Cardiff to Aberystwyth by train, you have to leave Wales and then enter it again. Until the Thatcher era there was a railroad around part of a perimeter of the peninsula’s coast. After the local industry had been destroyed by the infamous PM, this railroad shared the same fate. In his essay in Welsh (Plural), Dan Evans quotes Gwyn Alf Williams, who claimed that ‘The deindustrialisation and increasing acculturation of the 1980s was … a far greater and more insidious threat to Welsh working-class life and national distinctiveness than the invasions of the Romans, Saxons or Normans ever were.’

Besides some unexplainable historical anachronism (the ‘working class’ as we understand it didn’t exist in Roman, Anglo-Saxon, and Anglo-Norman times), this is just a modest exaggeration. During Thatcher’s rule Wales lost its ‘second heart’ (or one of its two ‘truths’ in Raymond Williams’ terminology); neither Suetonius, Paulinus, nor Henry I had changed the local way of agriculture; they limited their rule mostly to building the top level of their authority and administration above the existing economic, social, and even legal local system. Of course, the very nature of all things Welsh changed after each conquest of its territory, but it happened slowly. So far, just two things have transformed Wales drastically in a pretty short historical term—industrialisation and deindustrialisation. The former introduced railroads to Wales, the latter wiped many of them out. Mutilated public transport survived and became the best possible place to talk about Welsh and Welshness. Buses.

At this point it’s time to return to the key topic of the most of the nineteen essays compiled in this highly interesting and illuminating book. Welsh as an identity, whatever this hysterically overrated term could mean. Welsh as a language which seems to be the very heart of Welsh as an identity. Welshness as a fruit of the uneasy union of Welsh (1) and Welsh (2). The occupations of the authors are diverse, from social activist to academic, from folk musician to journalist. Writers prevail among them because of the obvious reason that these ‘engineers of human souls’, as Soviet writer Yury Olesha put it, professionally deal with a language; and, at the same time, they deal with public opinion. At least that was so before the invention of Instagram and TikTok. But in Wales by the venerable word ‘tradition’ people still mean ‘literary (poetic) tradition’ and ‘musical (choir) tradition’. And traditionally, tradition is considered as a cornerstone of Welshness.

Despite this diversity of professional, social, and cultural perspectives, most of the texts published in the book can be described in a single way—they bear witness about Welsh identity of their authors, about their involvement in this identity, about their attitude to it and—of course!—about how they struggle to construct it. The emotional/lyrical attitude in some texts is stronger than the rational/conceptualising one, but in any case, these evidences of the experience of belonging to the entity called Wales are priceless. First, they explain a lot about Wales for the wider public. Second, they can be used as a rich material for the future historian, sociologist, or political thinker. It looks like that this was the main aim of the collection—to make modern Wales more visible in all its complicated internal divisions. Moreover, it’s not about unique ‘local’ or ‘regional’ problems—their localness and regionality are global. Old-fashioned Marxists called this ‘a dialectic of the individual, particular and the universal’.

But several essays of this collection are about reflection itself. Martin Jones writes about the background (and till recently, inevitable horizon) to any discussion of Wales and Welsh history. The national revival of the nineteenth and early twentieth centuries had been fed by a history of oppression and suffering under foreign rule, and the feverish Romanticism of the heyday of industrial and colonial capitalism made History from this history. And instantly, History became Tradition. The Tradition. It excludes everyone besides Britons and Saxons (Anglo-Normans) and their descendants—and this was the starting point of a nationalist Welsh exceptionalism (and mild racism as well). Most of Welsh (Plural) consists of voices from outside this fossilised dual world of late Romantic ideological paraphernalia. Mike Parker and Dan Evans discuss it from different perspectives. For Parker, the future of the Welsh lies on the path traced by the Austrian émigré Leopold Kohr and Jan Morris, a path of ‘middleness’ in contrast with the ‘big world’, especially the big English/London world of extremes. Evans concludes his brief description/deconstruction of the existing historical forms of Welshness with a call for a ‘new, accessible identity to supplement the increasingly fragile structure of feeling which has somehow outlived the way of life which created it.’

One of the key texts of the book is Morgan Owen’s ‘Ghost or Reflection? Merthyr, the Welsh Language and Identity’. In the nineteenth century, this small town near Cardiff became an industrial hell on earth, and today stands as the local/global symbol of post-industrial decline, desolation, depression. But still there is life there today, and this is Welsh life. In Merthyr, working-class history became part of a national history, and vice versa. National/ethnic/religious oppression is often a disguised and transformed form of class oppression. Classic—and especially modern—nationalism tries to conceal this truth, which is why most recent discussions of ‘identity’ and ‘identity politics’ are so aggressively hollow. ‘Identity’ is divorced from class consciousness which, however it dolls itself in traditional folk garments, is international, even global in its nature.

In 1831, Merthyr was the place for one of the most important episodes in the history of working-class struggle against capitalist exploitation. Local miners and metalworkers not only fought courageously for their rights, but demonstrated how workers are good at military and civic self-organisation. And of course, Merthyr is the place where the red flag was used as the symbol of a working-class uprising for the first time.

Welsh (Plural): Essays on the Future of Wales, edited by Darren Chetty, Hanan Issa, Grug Muse and Iestyn Tyne, is published by Repeater.