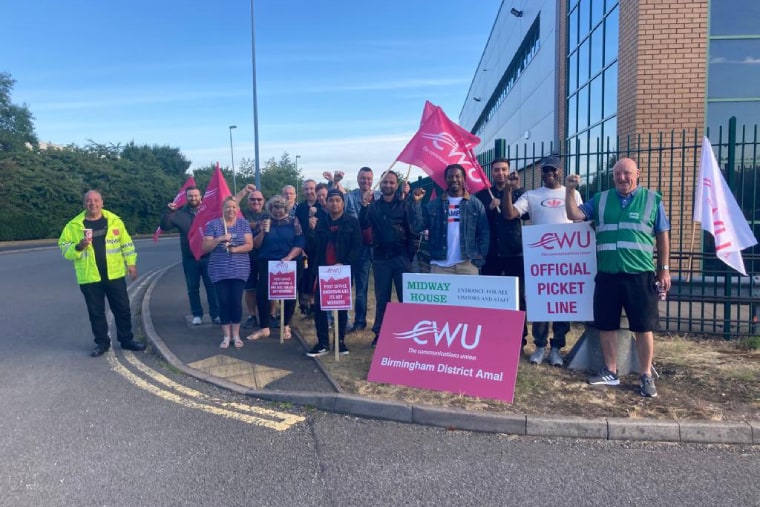 Post Office logistics and admin workers finished off a third round of strikes over pay, shutting down cash distribution to branches across Britain.

“It’s skulduggery like you’ve never seen,” Phil, a CWU union rep at a cash depot in east London told Socialist Worker. “They set themselves a target of making £38 million in the 2021-2022 financial year, and if they make their target, they get paid their bonuses. They actually made £39 million, so they’re a million pounds over.

The strike comes amid a growing showdown over pay between workers and bosses in all industries. After striking for three days in June, Network Rail workers are set for another strike later this month. The civil service workers’ union announced on Thursday that it will ballot its members for strikes over pay from 26 September.

And every group of workers in the CWU union is now embroiled in pay disputes. Union leaders said on Wednesday that they are on the cusp of announcing strikes by telecoms workers in BT. And a ballot for strikes in Royal Mail is set to end on Tuesday of next week.

“It’s more than just our own situation, it’s across the country,” said Phil. “Working people need a pay rise, no matter where you work. Even barristers are taking strike action. Whoever thought you would see that?

“If you’re in a public service like post, trains, telecoms, we’ve all worked through the pandemic. We see the business making a profit, the bosses are getting their bonuses, but the people who generate that are being left out.”

Phil added that, after the rail strikes, “A lot of people see the RMT union and say we want to be doing what they are, three days at a time.”

The Post Office strikes have been well supported. CWU reps reported that the strike at crown Post Offices on Tuesday forced branches to shut or close early, with managers having to do strikers’ work.

But after three days of strikes followed by weeks of negotiations, bosses have only upped their offer from 2 to 3 percent. With inflation running at close to 12 percent, that’s a massive real terms pay cut.

More sustained action, especially by cash delivery and admin workers, could put much more pressure on Post Office bosses to pay up. “When we take our action today that affects the whole network. So there are no offices in London, Kent or Surrey that will have deliveries or collections today,” said Phil.

He added that the union was “always trying to be responsible.” “If we do a four-day week, then three days on strike is nearly a week’s wages,” he said. “It’s a big ask of people, especially with the cost of living crisis.”

But, he added, “If anything, our members are saying they want to step it up. Can we do two, can we do three rather than one?

“If we could do two or three days then that would really cause a big problem. The franchised post offices are still open, and still paying out cash. But that’s going to build up and they may even cash out.”