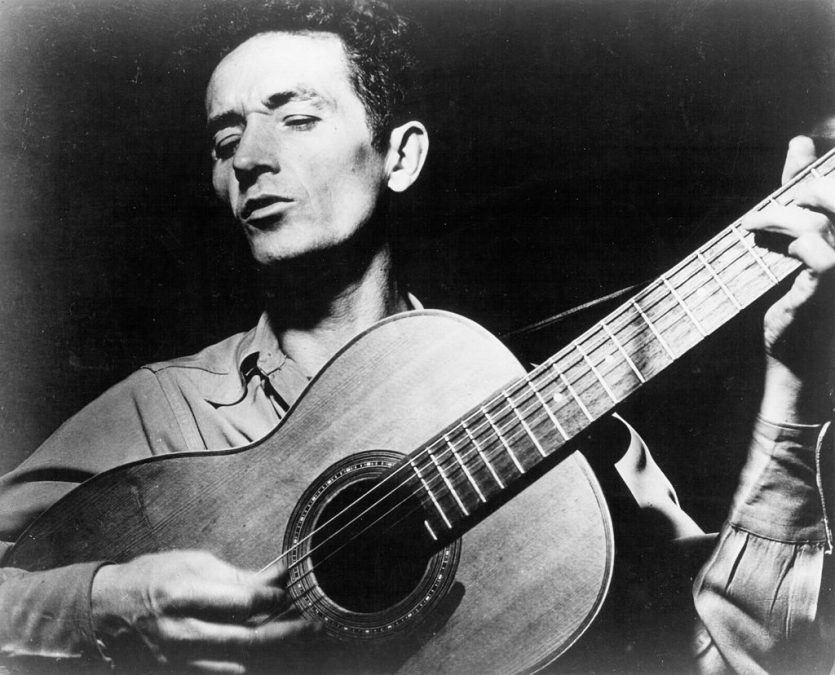 Woody Guthrie was born 110 years ago today. A commitment to socialism and a condemnation of capitalism lay at the heart of his activism, his movement, and his music.

In general, two images perpetuate the Woody Guthrie legend. In the first, he is the rambling Okie troubadour, known for hopping freight trains and writing simple ditties celebrating the common people of America. In the second, he is an outspoken advocate of the so-called ‘Old Left’, the labour-centred mass movement that blossomed in response to the Great Depression, whose members ranged from FDR supporters to communists; Guthrie himself frequently spoke favourably of the latter.

This second image is far more historically accurate, and more significant. But the persistence of the first has meant that his political views and sympathies have sometimes been absorbed into American settler-colonialist myths: the trope of freedom as anti-social, inhering in the unrestricted mobility of individual white males through wide, open, fictionally uninhabited spaces. But Guthrie’s relationship with movement and travel was more complicated than that—and tied intricately to his radical and anti-establishment politics.

Guthrie did move around a lot, especially during the early years of his musical career, in the late 1930s. These travels brought him into contact with some of the nation’s most exploited victims of capitalist predation, migrant workers in particular. One factor behind this restlessness was his intimate experience of the debilitating effects of Huntington’s Disease suffered by his mother, Nora Belle Guthrie.

Huntington’s is a neurological condition characterised by dyskinesia—the loss of control of movement—and, in many cases, dementia. Guthrie was close to his mother; she taught him how to sing and play old folk songs. But as the disease’s symptoms became gradually apparent in her middle age, the Guthries’ small hometown of Okemah, Oklahoma ostracised her.

Guthrie remained close to Nora Belle, but her erratic behavior had traumatic consequences: when Woody was seven, a fight between his mother and his older sister Clara escalated into a physical confrontation, ending with Clara dead from burn wounds. This incident nearly reprised itself a few years later when Nora Belle seems to have lit her husband’s clothes on fire as he napped on a couch.

Events like these could make anyone associate home life with terror and trauma, and Guthrie sought comfort in the open road. At the same time, he got married and had kids, and moved his young family to southern California. But he routinely neglected his loved ones by taking off on trips to play music among migrant workers and organisers, many of them socialists and communists, and the marriage fell apart by 1940.

In 1942, having been recognised as an exceptionally talented songwriter and performer by Library of Congress folklorist Alan Lomax and his young intern Pete Seeger, Guthrie moved to New York to join Seeger’s group The Almanac Singers. There, a more detailed politics of the body in Guthrie’s work began to emerge, instigated largely Marjorie Mazia, a dancer with the groundbreaking modernist choreographer Martha Graham’s company.

Brought together when Guthrie was asked to provide music for one of Mazia’s side projects, Marjorie and Woody fell for each other hard. Guthrie became fascinated with her creative world, writing articles for a leftist dance magazine that praised its foundation in key terms adopted from labour and socialist politics, speaking of ‘organisation’ and ‘a planned world’. He also cited the discipline the dancers demonstrated in remaining graceful despite the regular injuries they suffered.

Guthrie’s relationship with Mazia and his immersion in New York avant-garde circles prompted him to think in expanded ways about his artistic vocation, and about politics. Even as he continued to play labour rallies and express his support for communism, he began writing in multiple genres—fiction, memoir, verse, drama—and to tell longer, more reflective stories than he could do in his songs. He painted, too, often producing semi-abstract images of spinning and sprawling dancers’ bodies. He chafed at the largely positive reviews of his autobiographical novel, Bound for Glory, which he’d been finishing around the time he met Marjorie; too many, he thought, portrayed him as a figure of down-home country wisdom and ignored the poignant treatment of his mother’s illness.

Reading through Guthrie’s papers, it’s very difficult to discern whether he knew his mother’s illness had been Huntington’s, or that the condition was inheritable. Since symptoms emerge very gradually, over the course of years, it’s also difficult to say when he began to feel its effects. But reports of erratic behavior and what he called ‘queer’ feelings began adding up in the late 1940s, compounding the challenges of losing his first child with Mazia in yet another tragic fire. He had many musical and literary projects in the works, but he had more and more trouble finishing them.

During these years when his health became less reliable, he began to write more precisely and expansively about the relationship between politics and the body. In particular, his journals and notebooks show him expressing concern with the social regulation of bodies by the imposition of ideas of the ‘normal’, writing of ‘worlds of rooms and desks where men and women are gathered around in robes, coats, suits, and dresses, to say what I shall write, speak, talk, and sing / And they tell me I am locked and barred from singing the true feelings of my nakedest skin.’

More strikingly, in one journal passage, he swore to ‘get my soul known again as … the sexual maniac, the saint, the sinner, the drinker, the thinker, the queer… It’s not til you have called me all these names that I feel satisfied.’ It’s difficult to imagine many of Guthrie’s 1940s left contemporaries writing this way, valorising categories of stigma like ‘queer’ because they represent types of people over whom social regulation finds it hardest to assert power.

In the 1950s, it became harder for Guthrie to deny that something was seriously wrong with him. He spent more time among doctors and psychiatrists, sometimes for months at a time, often receiving erroneous diagnoses like schizophrenia (he was finally diagnosed correctly at Brooklyn State Hospital in 1952). His call in his journal to ‘gain all the knowledge you can about your own human body’ starts to resonate as a plea to resist rigid categories imposed by institutional medicine; some of the knowledge doctors were gaining about Guthrie was going straight into his FBI file.

People whose bodies deviated from the norm, such as the disabled and chronically ill, threatened the social order, he came to believe. Although he never cited his childhood explicitly, witnessing his hometown make an outcast of his mother was an experience that had never left him. A society prioritising efficiency required sameness, and saw diverse modes of care, diverse ideas about flourishing, as a threat to profit.

He insisted that the supreme ‘sickly disease’ was capitalism itself. Capitalism’s response was to make these people’s deviant bodies disappear—to warehouse them in hospitals and asylums, institutions which he felt performed the same function as prisons. ‘I see every hospital to full / I see every jail house to full, I see every prison overloaded for hell’ he wrote during a two-month stay at Brooklyn State. He even proposed that patients form a union, believing that the very act of collective organisation would help repair their ailing bodies and minds.

From 1956 until his death in 1967, Guthrie lived permanently in hospitals as his symptoms became more and more severe. One of the most poignant aspects of his consistently difficult life is the fact that at the same time as his body was fostering new political ideas, it was slowly destroying him. But 110 years on from his entry into the world, it’s time to consider a wider range of his work and ideas—a task well abetted by the recent publication of the compilation Woody Guthrie: Songs and Art, Words and Wisdom. Doing so illuminates the curious fact that a figure long celebrated for his seemingly endless mobility as a symbol of America was both physically and politically more complicated than some renditions of ‘This Land Is Your Land’ would have us believe.