Home / News / A City Perfect, In Every Detail 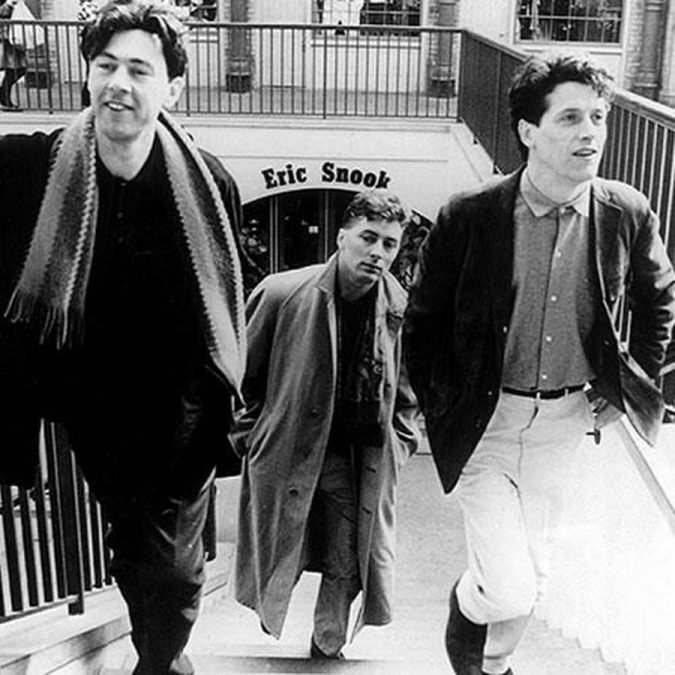 Forty years ago, Glasgow band The Blue Nile released their first single. Their work was rooted in Glasgow itself, and the changes wrought by the shock of Thatcherism.

Having emerged from a spate of different bands in late 1970s Glasgow, The Blue Nile—consisting of singer and songwriter Paul Buchanan, keyboardist/synth wizard P. J. Moore, and bassist Robert Bell—released their debut single (‘I Love This Life’) in 1982. Seeing themselves at odds with some of the more trendy denizens of the Glasgow scene at the time, the group holed up in their flat in the city’s West End, often rehearsing all night through headphones, perfecting their sound. This would take hold on the 1984 LP A Walk Across the Rooftops, released on South Glasgow’s own Linn Records (an ad hoc label offshoot of their hi-fi company Linn Audio), adorned with a photo of the trio gazing through a shop window in the Southside’s Cathcart Road. Their demo was made with such a comprehensively modern, hi-fi sound that it was used to illustrate the quality of their state-of-the-art equipment. A record deal with Virgin brought them the vast distribution that indies often lack.

A Walk Across The Rooftops (1984) and Hats (1989) represent the classic sound of the group, and are best considered as a pair, where Buchanan and co seem completely united in their creative work. They formed their own micro ‘emotional community’ in this period, pursuing a form of art that wished to communicate their truth to everyday people, with little interest in artifice. Thereafter, the band became more of a vehicle for Buchanan’s often devastatingly honest songs (‘Family Life’), less of a collaborative affair, becoming a reluctant but somewhat inevitable ‘frontman’, as singers are often made to do.

Interviews from their breakout period are fascinating. Somewhat shy and reluctant by their nature, these archival interviews capture the extraordinary ordinariness of the band at this point in time. This is not a slight, but rather a compliment. There is a passionate and dedicated sincerity that the group—in particular Buchanan and Moore—delivers their responses with. Compared with contemporary Scottish artists noted for their chest-beating, stadium-ready candour, what separates The Blue Nile is a sense of understated pop modernism. Theirs is a highly strung, melancholic pop music—the best kind.

There are the precise textures of 1970s soul—Isaac Hayes’ controlled emotional masterpiece Hot Buttered Soul comes to mind—but with an unmistakable eighties sheen. The emotional potential of 80s music technology was being directed away from bombast (think Ultravox, Spandau Ballet, Duran Duran), towards direct, almost austere sentiment. Perhaps this is what resonates with listeners today, with the group namechecked (and, to some extent, pastiched) by The 1975—‘Love It If We Make It’ is a poptimist millennial’s retooling of ‘Downtown Lights’.

Buchanan’s darkly confessional words speak to bitter experience and regret, yet always with some sense of hope. Much of their work is focused on the city of Glasgow itself, the city as a character, and the changes wrought by the early shock of the Thatcherite revolution. A Walk Across The Rooftops’ key track is ‘Tinseltown in the Rain’, today their most popular song in terms of streaming numbers on Spotify. Sounding like a possible hit in an alternate universe, ‘Tinseltown’ provides wry, contemplative lyrics where ‘tall buildings reach up in vain’, full of nostalgic dread (‘Love was so exciting’). It is also a hymn to the ‘one big rhythm’ of the city, the interrelationship between standardised consumption and the feeling of strange magic. It still resonates powerfully with Glaswegians to this day, the Glasgow that is in flux, taking it hard, but always emotionally open and expressive. Yet Buchanan has also spoken of its universality, its replicability—this could be anywhere (but in a good way).

‘Heatwave’ begins with one of the group’s great intros, a pattering of percussive minimalism, before segueing into a lyric that powerfully articulates the profound dislocation weighing upon the working class. Buchanan’s resigned lyric is a riposte to the hyper-capitalist boosterism for greed, under the guise of economic growth: ‘Are we rich or are we poor, does it matter anymore?’ Much as the essential detail of the city—its almost-connected red sandstone tenements—is zoned in on in the title track, ‘Heatwave’ points out another target of Thatcher’s shock doctrine: ‘falling down, on the young and foolish’. Its vacant centre, its illusory quality, ‘straw houses, in the promised land’. ‘Easter Parade’, by contrast, is a paean to a still Sunday, beginning with the uncanny image of ‘the Love King, out in the morning air’. An unusual song form, and in that sense readable as post-punk, ‘Easter Parade’ is imbued with a solemn reverence for the place that shaped their sensibilities: ‘A city perfect, in every detail’.

1989’s Hats feels like a companion piece, a deepening refinement of their debut’s concerns. Five years in gestation, borne out of creative struggle, it bears the mark of music that has been worked on over and over. Art needs time to develop independently, and Buchanan has spoken of the pressures to ‘deliver’ that they were put under by Virgin during this period. Using an analogy of natural growth, he described the absurdity of the label’s squeeze in an RTE documentary about the band from 2016—‘It’s like shouting at a flower—it’s not going to make it grow’. Ultimately, the time spent crafting this music paid off. The production is even more crystalline than their debut, and its emotions run deep. The hope of departing from the country to the city (‘Over the Hillside’), the melancholia and dislocated individualism of the metropolis (‘The Downtown Lights’), drunk, late-night despair (‘From a Midnight Train), but with a ray of hope, connection, and the possibility of romantic love at the album’s denouement (‘Saturday Night’), of the emotional city itself (‘headlights on the parade, light up the way’). Hats is rightly viewed as the band’s masterpiece, and resonated massively with their largely word-of-mouth audience. The publicity-shy group were bowled over by the response, and which resonated massively with audiences; a live recording made by the BBC at Manchester’s Free Trade Hall in 1990 captures the euphoria with which they were received at the time.

In a similar way to the incredibly powerful work of Cathal Coughlan in Microdisney, The Blue Nile were a fine document of 1980s alienation. Coughlan satirically dissected the class divide as an Irish immigrant attuned to imperialism’s effects/affects, with elite retrenchment and social sadistic liberalism (‘cruel but profound’) of the period a particular focus. Buchanan’s work is more that of a Romantic, with a felt perception of politics—’working night and day don’t make no sense’. Both lower middle class in origin, their in-between status affords them a perspective to be able to see the system’s mutations, inconsistencies and, indeed, pleasures, more clearly.

From industrial heft to post-industrial service, from making objects to generating ideas, there is a profound sadness in this shift. Glasgow began to become a city of culture, officially legitimised in 1990 as a European Capital. This moment has been heavily reformulated as ‘the Glasgow Miracle’ (with all the attendant flattening of the story that such a process inevitably produced), but it’s worth remembering those who didn’t benefit. When capitalism shifts into its next expansionary search for commodification, it is brutal. ‘All that is solid melts into air, and all that is sacred is profaned.’ In 1979, Glasgow had the largest amount of state-owned housing outside the Eastern Bloc. At the beginning of the 2000s, its stock was transferred to housing associations, after heavy depletion by the right-to-buy. Red Glasgow is still in evidence, but in a residual form. It is constantly being rebuilt, rooted in the hope of the everyday.

Paul Buchanan is characteristically humble about the group’s work, and very
conscious of their implicitly political approach towards the world of commerce. As he put it in a BBC Sounds podcast: ‘I didn’t invent penicillin and I didn’t save anyone’s life, but I’m glad we did what we did. This isn’t a moral comment at all, but I think that in a society where we’re constantly encouraging each other to buy things whatever they’re worth, it feels to me an extremely small but worthwhile endeavour to try and make something for the sake of being beautiful rather than for profit.’ At a time of 360 deals, Tik Tok grind-sets and un/underpaid social media toil, these are particularly wise words.