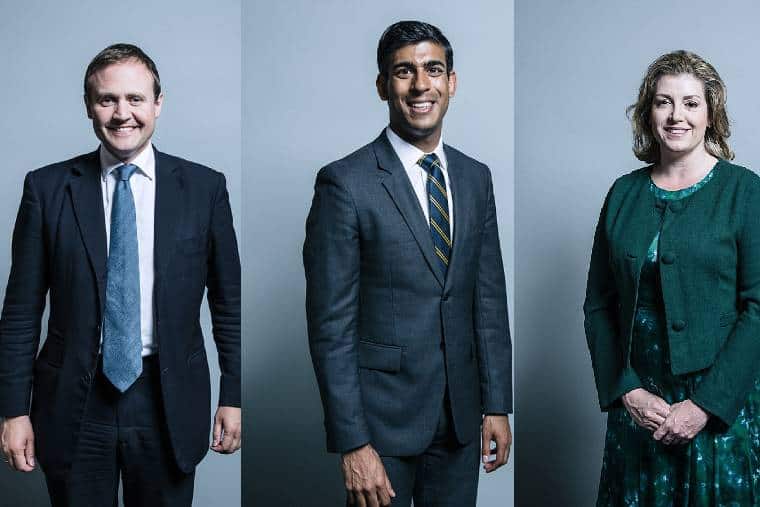 Tory leader hopefuls are battling it out

The Tory party descended further into civil war as the leadership candidates squabbled among themselves in the first live TV debate on Friday. The five remaining contenders—Rishi Sunak, Penny Mordaunt, Kemi Badenoch, Liz Truss and Tom Tugendhat—battled it out over Boris Johnson’s record, tax cuts and trans rights.

They tried to distance themselves from Johnson—but too much. When asked, “Yes or no—is Boris Johnson honest?” almost all the candidates couldn’t give a straight answer. Kemi Badenoch chortled, “Sometimes,” while former fire minister Penny Mordaunt tried her best at firefighting, admitting, “There have been some really severe issues.”

Sunak—whose resignation triggered Johnson’s downfall—said he “tried to give him the benefit of the doubt for as long as possible.” “But ultimately, I reached the conclusion that I couldn’t and that’s why I resigned,” he said.

Sunak gave Johnson the “benefit of the doubt” right through the Tories’ murderous mishandling of the pandemic, corrupt Covid contracts, Downing Street parties and their other crimes. It was only after Johnson grew as an electoral liability that Sunak “reached the conclusion” that he couldn’t back him.

Liz Truss—hoping to win the support of the Tory Brexiteer right—was at pains to defend Johnson’s trustworthiness. “He himself has said that some of the statements were not 100 percent accurate,” she said.

Only that pompous warmonger Tugendhat could bring himself to say, “No.” While there was little enthusiasm for any of the candidates, one Opinium poll had him out in front with 36 percent of the votes.

The candidates competed over who could best manage the crisis of British capitalism in the interests of big business.

Sunak had to bat off attacks from the other candidates. Ludicrously, he’s having to deny that he was a “socialist chancellor” because the share of tax and state spending increased during the pandemic. His policies promoted state intervention to bail out the bosses’ system and protect profits.

Truss tried to cast herself as a new Margaret Thatcher by pledging tax cuts and “monetary policy”—higher interest rates—to bring down inflation. This certainly plays well with Tory backbenchers and members, who cling to the free market fantasy of a “small state” under capitalism.

But right now large sections of big business want state intervention to protect their profits in a time of crises. Sunak—the preferred choice of British capital—lashed out at her economic  “fairytale”.

Whatever their emphasis, they all agree on the need to make working class people pay for the cost of living crisis. Tugendhat, for example, said we need to “rethink how we do public services”—code for marketisation and privatisation.

They attacked Mordaunt’s record as equalities minister, saying she’d supported self-identification for trans people. In 2018, when heading up the consultation into reforming the Gender Recognition Act (GRA), Mordaunt had said, “Trans women are women and trans men are men. That is the starting point for the GRA consultation, and it will be its finishing point too.”

But backed into a corner, Mordaunt played into transphobic ideas stating, “I’m a woman. I’m a biological woman in every cell in my body.” She added that a “man” who has transitioned is “not the same as me”—and asserted repeatedly that she had never supported self-identification.

The candidates will be whittled down to two over the next week, with two more TV debates planned, and then party members will decide.

Whoever gets in, will be viciously pro-business, pro-bigot and anti-worker. Our side can derail the Tories, but only if we exploit the opportunity of their civil war. We have to massively up the level of struggle on the picket lines and streets to drive out Johnson and whoever succeeds him.