Home / News / Activists tell Pride in London: ‘no pride in cops or borders’ 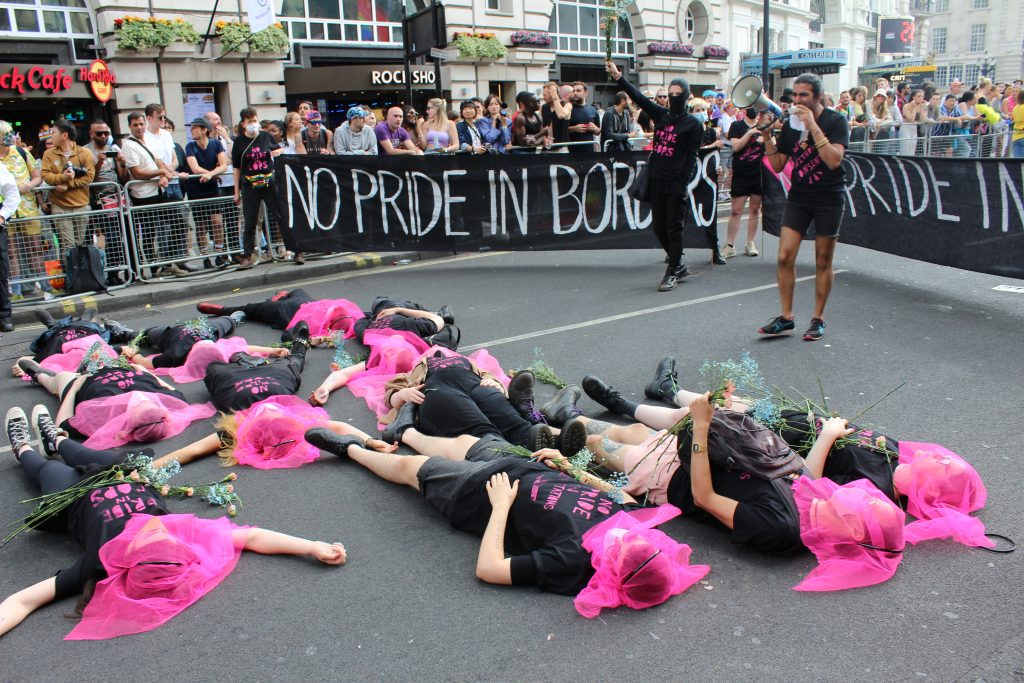 On Saturday 2 July, Lesbians and Gays Support the Migrants halted the Pride in London march to protest police presence at the event. Xī Mingyue reports.

At the 50 year anniversary of Britain’s first Pride event, 50 LGBTQ+ activists blocked the group of police officers marching in the parade out of uniform. The march was blocked for 23 minutes, one minute for each person who has died in the Metropolitan Police’s custody in the past two years.

The activists performed a ‘die-in’, wearing all black with pink veils. Their shirts bore a variety of abolitionist slogans: NO PRIDE IN COPS; NO PRIDE IN DEPORTATION; WE WITHDRAW CONSENT. LGSM held up two banners facing spectators, one reading NO PRIDE IN BORDERS, and another reading NO PRIDE IN COPS. Activists lay on the ground bearing flowers to mourn those murdered by the police, while chanting instructions on how to intervene in a police stop and search. This was followed by chants of ‘no pride in cops’, ‘no cops at pride’, ‘no borders, no nations, stop deportations’, and ‘back up, back up, we want freedom, freedom; all those sexist racist cops we don’t need ’em, need ’em’.

On 14 June, Lesbians and Gays Support the Migrants (LGSM) organised an open letter signed by ACT UP, the Gay Liberation Front and African Rainbow Family, demanding the end of police presence at Pride in London. The letter highlights the police’s failure of the LGBTQ+ community through their inaction on the serial killer Stephen Port, and the necessity of abolition for the liberation of queer migrants and refugees.

The die-in was a fantastic follow-up to this letter, transforming a demand into direct action: if the police insist upon being at our Pride, we will block them from marching onwards. The action received coverage in the Guardian’s live updates of Pride, and LGSM’s Instagram post about it has received over 10,000 likes as of the time of writing. LGSM brought abolition to the attention of Pride attendees and thousands of other LGBTQ+ people on social media, many of whose politics begin and end with a liberal, reformist conception of gay rights.

On 30 June, following LGSM’s open letter, Pride in London banned uniformed police officers from marching at the parade. Though a step in the right direction, there was a certain irony in this ban; the ban was an admission that police presence was antithetical to queer liberation, yet a police contingent was still allowed to march out of uniform. It was a small symbolic victory, but the LGBTQ+ community in London was no safer at this year’s Pride than before.

Calling on Pride in London to ban police officers at their march also capitulates to Pride in London’s monopoly on London Pride events. Pride in London is a neoliberal organisation which has shown no commitment to the political liberation of queer people. The LGBT+ Conservatives group marched in the parade, as did the British Army, the Royal Navy, the RAF, the Queen’s guards, and countless corporate sponsors.

An event which was born out of resisting state repression has been thoroughly depoliticised in modern times. When LGSM blocked the parade, Pride in London staff asked the activists what they were protesting for. This depoliticisation is something seen throughout liberal ‘gay rights’ activism more generally – gay rights is about acceptance in society as it exists, about changing attitudes and language surrounding individual LGBTQ+ people, about getting married and using the right words. But as soon as conversation turns to the real political content of queer liberation, liberals are uncomfortable. Transgender liberation is flattened to an issue of gendered language, while the defunding of the NHS, and the subsequent Gender Identity Clinic waiting times of over five years, is overlooked completely. From this point of view, allowing white gay people to marry is of the utmost political importance, but when you protest the deportation of a gay man to a country where he will face ‘near-certain death’, maybe tone down the politics a little.

The ostensible widespread acceptance of LGBTQ+ people is surface-level and conditional upon assimilation to straight society. The popular gay rights slogan, ‘love is love’, relies upon queer people being ‘just like’ straight people. Queer existence is sanitised to become non-threatening towards the nuclear family, towards law and order.

This conditional acceptance became clear when Pride in London responded to Saturday’s die-in. Pride in London’s security guards became violent towards the LGSM activists behind one of the barriers. This was the side with activists of colour; behind the other barrier were only white LGSM activists, and notably, that side received no violence at all.