Home / News / Under Jair Bolsonaro, Meat Is Becoming an Unaffordable Luxury Item for Most Brazilians 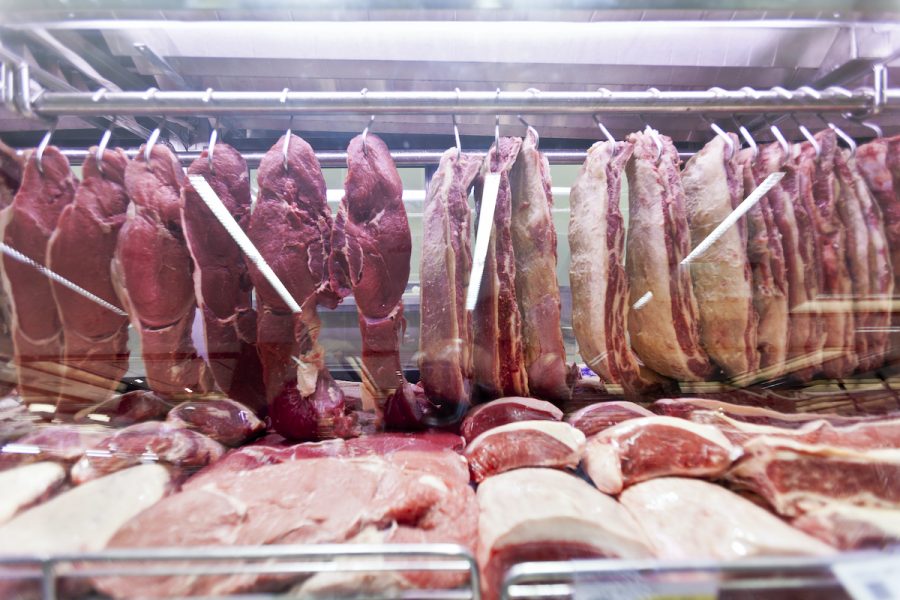 Brazil is the world’s biggest beef exporter, yet over half its population says it can no longer afford red meat. President Jair Bolsonaro is denying the problem exists, even as his own policies deepen most Brazilians’ cost of living crisis.

Brazil is headed toward presidential elections this October — and for the Workers’ Party (PT) leading the challenge to far-right incumbent Jair Bolsonaro, food prices are at the top of the agenda. In recent weeks, social media has been awash with videos of PT supporters taking their protests into supermarkets, putting stickers next to food items to show how much cheaper they used to be under left-wing president Luiz Inácio Lula da Silva, or Lula.

Alongside these protests, in June, members of the Homeless Workers’ Movement protested in the food courts of luxury shopping centers in Brazil’s largest city, São Paulo. During this action, protesters held flags emblazoned with the word “Fome” (Hunger) and carried small pieces of bone, in memory of recent widely reported images of people looking for scraps of meat discarded from butcher shops.

These actions were inspired by a recent shocking report published by the Brazilian Research Network on Food Sovereignty and Security (PENNSAN). It highlighted the grim reality that 125.2 million Brazilians, or 58.7 percent of the population, currently live in some form of food insecurity. The strength of this report has been felt across the country’s media landscape, as many newspaper headlines bore the figure 33.1 million — the number of people in Brazil who go hungry on a daily basis.

Behind these figures lies the harsh relationship between food, politics, and economics. As the PENNSAN report clearly states, this “historic setback” is the direct result of several obvious factors. In the shorter term, high inflation — particularly of food prices — has been aggravated by the disruption of supply chains due to the COVID-19 pandemic and the war in Ukraine. However, this is also coupled with the longer-term issue of increasing economic inequality, especially since the new austerity program launched in 2016.

A typical Brazilian diet consists of rice, beans, vegetables, and some form of meat, normally meaning beef, chicken, pork, or fish. Especially devastating has been the rising cost of meat — in 2021 increasing three times faster than the overall inflation rate. This has meant that, in a country that is currently the world’s largest beef and chicken exporter and fourth-largest pork exporter, the general population is now being forced to restrict its own consumption.

Meat is a particularly important social marker in Brazilian society. Historically, it is central to many of the country’s most famous national dishes, such as feijoada, a rich stew of beans, smoked pork, and dried beef. However, today due to rising prices, 55 percent of Brazilians have reportedly stopped buying red meat.

Beef especially has a special place in the national psyche. In a nation that prides itself on churrasco, a traditional style of cooking over an open fire using either a grill or skewers, beef consumption has become a key marker of Brazilian identity. This style of cooking became increasingly popular in Brazil during the mid-twentieth century, when the general population was gaining increasing access to cheap meat thanks to skyrocketing rates of beef production. In response, new restaurants began to open across the country, especially in beef-producing regions such as Rio Grande do Sul. These restaurants helped to cultivate a growing sense of national integration heavily associated with references to Brazilian cattle ranchers, known as gaúchos. On top of this, churrasco has a highly gendered dimension. The cooking and preparation are largely associated with men: not being able to afford to cook your favorite piece of picanha (beef rump) is seen as emasculating.

If churrasco is a core culinary facet of national identity, the current high inflation has put meat beyond many Brazilians’ budgets. Inflation is at its highest level since 2003. According to figures published by the Getulio Vargas Foundation in May, Brazil’s consumer prices have risen 11.73 percent in the last twelve months. This has led to a staggering 72.9 percent increase in the price of food items. This trend has also been measured by the Inter-Union Department of Statistics and Socioeconomic Studies (DIEESE), which produces annual food price surveys for the Brazilian trade union movement. Most recently, in March, DIEESE measured increases in food prices in all seventeen Brazilian state capitals, with the largest increases in Rio de Janeiro (7.65 percent), Curitiba (7.46 percent), São Paulo (6.36 percent), and Campo Grande (5.51 percent).

These figures are born out when talking to Brazilians themselves. Daniel Fabre, a labor lawyer based in São Paulo, told me, “All parts of my family, even the very rich parts, are complaining about food prices. . . . I consider myself middle class, but for me and my family, there are some items we just stopped buying.” When asked about his wages, he continued, “Proportionally my wages are the same,” but “food prices have risen much more than the wages.”

A similar story is also true for Rafael Luccio, a demand planner in São Paulo. Living with his partner who is a medical doctor, Rafael explains that they used to be able to afford to eat in restaurants and order food every day. However, “in the last ten months, we started to only buy frozen food because it’s a lot cheaper.”

Normally, Rafael’s salary is adjusted on an annual basis in relation to inflation, but because of the high rates of inflation in the past six months, he says, “I am getting poorer and poorer every month because of the inflation.” Continuing, he explained, “I used to buy five hundred grams of coffee that used to be R$12 ($2.25) a couple of years ago . . . and now it’s literally double the price.”

Like most Brazilian workers, Rafael receives a meal ticket (vale-refeição and vale-alimentação) from his employer every month valued at R$700 ($130). Normally, he says, this would cover the cost of food for him for the entire month. However, “in June, this ticket ran out on the fifth, after just five days. . . . That has never happened before.”

This worsening economic situation adds to an already tense political situation in Brazil, which will certainly escalate in the upcoming months. This year’s presidential elections will see a major clash between Left and Right as the PT’s Lula, president from 2003 to 2011, takes on the incumbent Bolsonaro. In this contest, access to food is sure to continue to be a central issue, especially given the vastly different approaches their respective administrations have taken toward food policy.

Under the current Bolsonaro government, food has become increasingly politicized and the situation for the poorest Brazilians even more difficult. The president claims that “Saying that people starve in Brazil is a big lie.” This denial reflects more than just an unwillingness to acknowledge the growing problem of hunger in Brazil. It also obfuscates the way the president’s own policies have contributed to it.

On January 1, 2019, his first official day in office, Bolsonaro abolished Brazil’s National Council for Food and Nutritional Security, which helped to formulate policies to ensure all Brazilians had access to food. Under his mandate, the government proposed to privatize twenty-seven of the ninety-two food storage facilities used by the National Supply Company, which were eventually closed. Public stockpiles of food items that make up the majority of the Brazilian diet, such as beans, maize, and rice, are now largely insufficient to meet the current food emergency.

Privatization and deregulation are cornerstones of Bolsonaro’s government agenda. This has helped to push Brazil back onto the World Food Program’s hunger list in 2021, even though it had successfully exited from it in 2014. These policies were built upon an austerity program inherited from previous governments that began in 2016.

In 2015–16, the Brazilian economy was hit by a major economic recession and rising unemployment. These dramas were intensified by a political crisis that ultimately led to the impeachment of then president Dilma Rousseff in April 2016. Even before this, some R$70 billion ($13 billion) was cut from government spending in an effort to curb the recession. This turn toward austerity was intensified under the next president, Michel Temer, who introduced a new constitutional amendment that established a twenty-year moratorium on increases to health and education spending. These cuts directly weakened public-health efforts linked to the consumption of healthy foods to combat excess obesity and diseases rooted in poor diets.

A War to Save Lives

The situation in Brazil twenty years ago stands in striking contrast with current food policies.

In 2003, PT first came to government under Lula and introduced one of its flagship projects, Fome Zero (Zero Hunger), with the aim of eradicating hunger and extreme poverty in Brazil. This took the form of various policies ranging from direct cash transfers paid to the poorest families through the Bolsa Família (Family Allowance) scheme, the opening of popular restaurants that supplied cheap food, the creation of new water cisterns to alleviate water scarcity, the introduction of nutrition campaigns, and the distribution of vitamin and food supplements.

Among these policies, Bolsa Família is, without doubt, the most remembered. To be eligible, families had to demonstrate that their children attended school and were fully vaccinated. This requirement has since been abandoned under Bolsonaro’s new social program, Auxílio Brasil.

Fome Zero, first introduced in 2003, had been conceived two years previously. As such, PT was able to develop a set of policies that not only proved highly popular and successful but also demonstrate the importance of long-term structural approaches to policymaking.

At his inauguration on January 1, 2003, Lula hammered home its importance:

We are going to create appropriate conditions for all people in our country to have three decent meals a day, every day, without having to depend on donations from anybody. Brazil can no longer put up with so much inequality. We need to eradicate hunger, extreme poverty, and social exclusion. Our war is not meant to kill anyone — it is meant to save lives.

The current crisis and historic situation of food politics in Brazil provides much for socialists to consider — in particular, the importance of thinking structurally about food systems.

Socialists should avoid individualizing structural problems, which ends up letting powerful opponents off the hook.

The current crisis is a product of a mixture of long-term and short-term trends, including austerity policies, wage stagnation, and the rampant inflation of food prices. Thinking structurally about food systems also offers the solution to these problems, as epitomized by the historic case of Fome Zero, which stands out because of its far-reaching efforts to tackle hunger in Brazil. Moreover, the fact that this scheme was (at least partly) devised several years before it was implemented further indicates the necessity of long-term structural approaches to solving and socializing food systems.

Thinking structurally about the intersection of food, politics, and economics is particularly important in order to counter the narratives repeatedly rolled out in liberal media like the Guardian, which places emphasis on individual consumption as the solution to climate change, and avoiding the situations which create food poverty.

Socialists should avoid individualizing structural problems, which ends up letting powerful opponents off the hook. We have already seen this logic with ideas such as personal carbon footprints, devised as a means to shift responsibility for climate change from large fossil fuel companies to individual consumers.

Instead, the solutions to collective problems have to be collective — and thus political. In the case of overcoming the crisis Brazil is today experiencing under Bolsonaro, it is vital that the Workers’ Party return to power later this year — and that all available international support be mobilized toward this goal.