Home / News / To Reduce Methane Emissions, Take on the Oil and Gas Companies 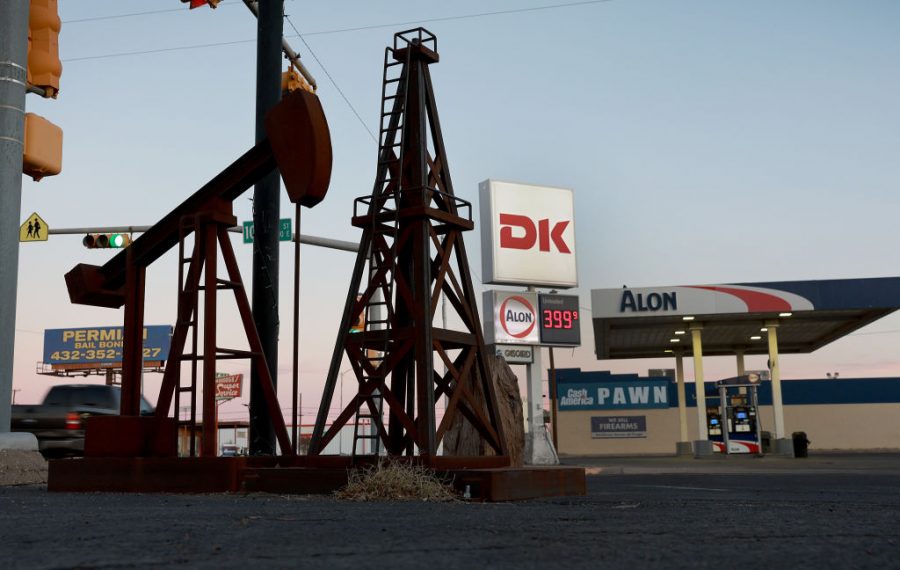 US and EU officials recently suggested targeting livestock and agriculture in Asia and Africa to reduce methane emissions. Far more emissions, however, come from oil and gas production in the US — but reducing them requires taking on fossil fuel companies.

At the COP26 climate conference in Glasgow last year, President Joe Biden called methane “one of the most potent greenhouse gasses” and said that the United States and Europe would work collectively to reduce methane emissions by 30 percent by 2030. Since then, more than a hundred countries worldwide have signed on to the Global Methane Pledge.

To help meet that pledge, US and European officials at a side event on the matter at a United Nations climate change conference in Bonn, Germany last month targeted one culprit in particular: the agriculture and livestock sector, particularly in African and Asian countries. That’s because manure, certain cultivation techniques, and gastroenteric releases account for a significant portion of methane emissions.

But these officials failed to address one of the largest and easy-to-fix sources of methane: emissions from the oil and gas sector, both from production of oil and gas as well as leaks across the supply chain.

Leaks, in fact, are responsible for 60 percent of oil and gas methane emissions. Because plugging these leaks would result in more product for oil and gas companies, the International Energy Agency (IEA), an autonomous intergovernmental organization, has said that nearly half of all fossil fuel methane emissions “could be avoided with measures that would have no net cost,” and that reducing oil and gas–derived methane is “amongst the lowest of low-hanging fruit for mitigating climate change.”

What’s more, a new congressional investigation has found that oil and gas companies have likely been underreporting the amount of methane leaking from much of their US-based operations. And while the Supreme Court’s recent West Virginia v. Environmental Protection Agency (EPA) ruling limited the EPA’s ability to regulate greenhouse emissions, legal experts say it likely doesn’t impede a proposed plan at the agency to address oil and gas methane emissions on a wide scale for the first time.

In response to questions from the Lever about addressing fossil fuel leaks, speakers at the Bonn conference floundered, vaguely stating that the oil and gas sector is a “sticky issue” and that there are “some barriers” to curbing the sector’s methane emissions.

But experts disagree — arguing that curbing methane emissions from the oil and gas sector, especially actions like plugging leaks, is easily achievable. Even reports by the United Nations Environment Programme (UNEP) clearly state that oil and gas is “the only sector for which the majority of emissions can be reduced in a cost-effective manner with technologies that exist today.”

While livestock and farming is also a significant driver of methane emissions, addressing these sources is likely less cost-effective, since low-carbon agricultural techniques are still in the development phase. In contrast, technologies designed to address oil and gas–derived methane emissions already exist — such as the International Methane Emissions Observatory that was launched by the UNEP with support from the European Union in October 2021.

Plus, as some observers point out, tackling oil and gas–related methane emissions in developed countries is a matter of global equity.

“The burden of [climate] action should not be unequally distributed.” said Arvind Ravikumar, professor in Petroleum and Geosystems Engineering Department at the University of Texas. “It makes practical sense that developed countries with high oil and gas production tackle their methane emissions first, while methane mitigation solutions for other sectors become more affordable.”

Reports by the Intergovernmental Panel on Climate Change (IPCC) have acknowledged that methane is responsible for at least a quarter of the warming we are seeing today. Other reports show that cutting methane by 45 percent this decade would avoid warming of 0.3 degrees Celsius by the 2040s.

“Because methane is a short-lived pollutant, if you reduce methane now, you will see benefits right now, as opposed to carbon dioxide where there are prolonged effects from accumulated carbon dioxide,” said Vaishali Naik, scientist at the National Oceanic and Atmospheric Administration (NOAA) and lead author of a chapter on “Short-lived Climate Forcers” in the seminal IPCC report on climate change published late last year. “This makes methane very attractive for addressing climate change and near-term warming, especially.”

No wonder, then, that 117 countries have so far signed on to the Global Methane Pledge, committing to “work together in order to collectively reduce global anthropogenic methane emissions across all sectors by at least 30 percent below 2020 levels by 2030.” But despite such bold words, the pledge lacks specifics in terms of how each of the countries plan to meet the targets by 2030.

“The pledge is important but it can be effective only if it includes guidelines and specificity in terms of commitments,” said Collin Rees, senior campaigner at Oil Change International.

The vaguely worded methane pledge stands in contrast to other undertakings like the Beyond Oil and Gas Alliance (BOGA), an international coalition of governments that touts specific actions like members committing to “end new concessions, licensing or leasing rounds and to set a Paris-aligned date for ending oil and gas production.” The United States is not a member of BOGA.

The fact that the Biden administration is currently opening up public lands to new oil and gas drilling shows how the methane pledge lacks binding obligations. “The pledge is clearly not as stringent as it needs to be if the US is pouring more money into new oil and gas infrastructure,” said Rees. “So the danger is that the pledge can actually become a distraction.”

Joeri Rogelj, director of research at London School of Economics’ Grantham Research Institute on Climate Change and the Environment and a lead author of several IPCC reports, has another concern about the methane pledge: Does it go beyond what countries already committed to as part of the 2015 Paris Climate Agreement?

As Rogelj noted, “It is unclear how additional the pledged emissions reductions are to overarching, national economy-wide pledges [made under the Paris Agreement].”

The specifics of reducing methane emissions is also a matter of climate justice. Emissions linked to agriculture and livestock in the developing world are routinely termed “survival emissions,” because they’re intrinsically linked to livelihood in poorer parts of the world, as opposed to the profits of large oil and gas corporations.

“Where and how greenhouse gas emissions are addressed is definitely an issue of equity,” said Naik at NOAA.

Around 80 percent of farmlands in sub-Saharan Africa and Asia are managed by smallholder farmers. Methane emissions from such sources therefore stand in contrast to not just methane from the oil and gas sector, but also from industrialized forms of agriculture in developed countries in Europe and in the United States.

Interestingly, a day after the climate conference in Bonn, the US State Department released a statement acknowledging that “tackling methane emissions in the oil and gas sector is critical to achieving the Global Methane Pledge target.”

The proposed rule reflects “a clear need for robust federal regulations to ensure that the oil and gas industry moves swiftly towards large-scale reductions in methane emissions from its operations,” noted an internal report by the US House Committee on Science, Space, and Technology released last month. The report added that the rule could be “an essential pillar of America’s drive to achieve the targets set forth in the Global Methane Pledge.”

And while the Supreme Court’s recent West Virginia v. EPA ruling limited some of the environmental agency’s regulatory powers, Daniel Farber, law professor at the Center for Law, Energy, and the Environment at the University of California, Berkeley, said there’s no reason to believe that the judgment would impact proposed methane rule because it is “a very routine exercise of EPA’s power to impose emission limitations on pollution sources.”

According to Farber, the Supreme Court ruling is intended to curb the EPA’s regulation of carbon dioxide from power plants, which is different from regular EPA regulations. “In the court’s view, instead of regulating emissions at individual sources, EPA was asserting authority to control what energy sources would be used on the US electricity grid,” said Farber. “The methane regulations, on the other hand, are much closer to business as usual for EPA.”

A spokesperson for the EPA declined to weigh in on whether the proposed rule would be impacted by the West Virginia ruling. They noted, however, that the agency is also working on a supplemental proposal on the matter. “The supplemental proposal is an important step in developing a final rule, which we expect to finalize within the next year,” they explained.

Addressing oil and gas–related methane emissions is also an environmental justice issue within the United States. A recent study published in Nature found that more racially diverse neighborhoods had twice the number of oil and gas wells as those that were mostly white. “Addressing methane leaks does nothing for communities who are suffering from oil and gas extraction and pipelines bursting in their backyards,” said Rees at Oil Change International.

The EPA agrees. According to the agency spokesperson, the draft oil and gas methane emissions rule “is a crucial step in fighting climate change and protecting public health in areas of oil and gas development, especially in communities located near oil and gas facilities and that all too often suffer disproportionately from pollution and poor air quality.”

You can subscribe to David Sirota’s investigative journalism project, the Lever, here. This work has been made possible by the support of the Puffin Foundation.