Home / News / We Shouldn’t Be Working In This 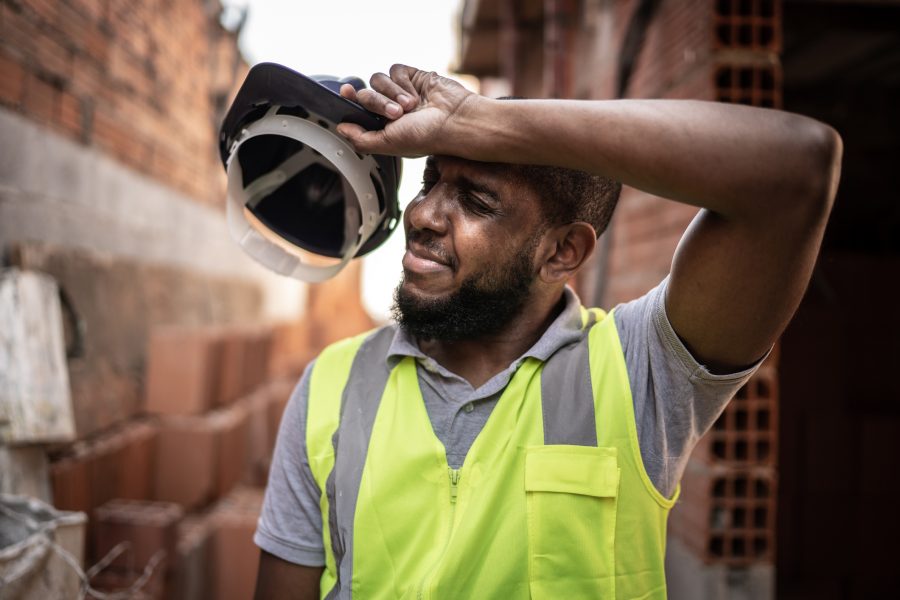 This week’s heatwave will make work nasty at best and fatal at worst, especially for people in physical or outdoor jobs. We need a maximum working temperature in law to stop people facing conditions like this.

It’s really hotting up. Temperatures in Britain this week could reach the highest on record, and in ten years, scientists say we could see 40°C become the summer norm.

Our environment is not accustomed to such a rapid rise. Neither are our workplaces. It’s not just a case of being uncomfortably hot: working in dangerously high temperatures brings with it a whole range of risks.

Anyone working in extremely hot weather faces heat hazards ranging from dizziness and headaches to fainting and heat stress. When our blood temperature reaches 39°C, we’re at risk of a stroke or loss of consciousness, with delirium or confusion setting in above 41°C. Blood temperatures at this level can be fatal or cause irreparable organ damage.

We also see more accidents occur in hot weather. Our concentration starts to drop by five percent when temperatures exceed 28°C, meaning workers are more likely to make mistakes, putting themselves or others at risk. Sweaty palms can cause problems with the use of equipment.

Certain workers are exposed to more risk than others. Those whose jobs rely on working outdoors, like posties and construction workers, already have a three times higher likelihood of developing skin cancer. Train and long-haul drivers are at risk of overheating where cabs and vans do not have aircon, and from UVA radiation passing through windows. The Communication Workers Union recently shared the names of three postal workers who had died during or shortly after their delivery rounds during previous heatwaves.

Other high-risk jobs include those working indoors doing strenuous activity, or in workplaces that lack adequate air-cooling facilities or are already hot, like kitchens and factories. And anyone with existing illnesses like high blood pressure or heart disease is at increased risk, as are women during pregnancy or menopause.

So if Britain’s weather is catching up with hotter parts of the globe, what about our workers’ rights? In the US, almost 400 workers have died from heat exposure in the last ten years, and rates have doubled since the 1990s. The guidance there says workplace temperatures should not go beyond 24°C, and last year Biden announced a series of measures to tackle workplace heat exposure, with enforcement officers due to make unannounced inspections for the first time this summer. Meanwhile, our regulator struggles with half as much funding since the Tories took power: a gift to bad bosses.

At present, Britain’s workplace regulation says temperatures should not drop below 16°C, but there’s no guidance on what a maximum should be. Employers are only advised to ensure the temperature is ‘reasonable’, leaving it wide open to interpretation.

What we need instead is clear guidance and a new law stipulating a maximum working temperature. The TUC wants to see employers forced to cool indoor workspaces when temperatures exceed 24°C, with working above 30°C banned. And we need employers forced to make changes to protect workers, with tougher regulation and enforcement on those who put workers in harm’s way.

While it may not be possible to control the temperature outdoors, workers are entitled to protection from sun exposure, including protective clothing and access to water. We need employers to be forced to consider adjusting shifts to avoid peak heat, too, and providing sunscreen free of charge.


But as with securing any worker protection, we cannot wait for change from the government or action by employers or regulators—we must force it through collective action.

Change could come from a call to increase access to welfare facilities. One group of workers on the London Underground, after being refused access to cool drinking water, on advice from their union, cited Section 44 of the Employment Rights Act to remove themselves from the workplace and shut down the station. Their move resulted in management introducing breaks for water.

Or it could be a call to relax uniform policies and dress codes. As a young teacher, Kevin Courtney, now head of the National Education Union, once forced a change to school policy by daring to wear shorts to work in hot weather. He was disciplined by the school management for doing so, leading to the rest of his colleagues returning to school the following day, all wearing shorts.

In workplaces everywhere, workers have challenged management to cool the air, with safety reps exercising their right to carry out inspections using thermometers. Struggling for safety from heat hazards presents a clear opportunity to involve members in demands and demonstrating to non-members the benefits of union membership.

The best examples of heat and sun risks being taken seriously are where workers have come together, proving the power of unions to protect our members. The threat to our health, let alone the planet, is urgent: it requires urgency in our organising, too.

See more information from the TUC on protecting workers from the risks of heat:

Too Hot, Too Cold

Cool It!, a guide for reps

It’s getting hot in here