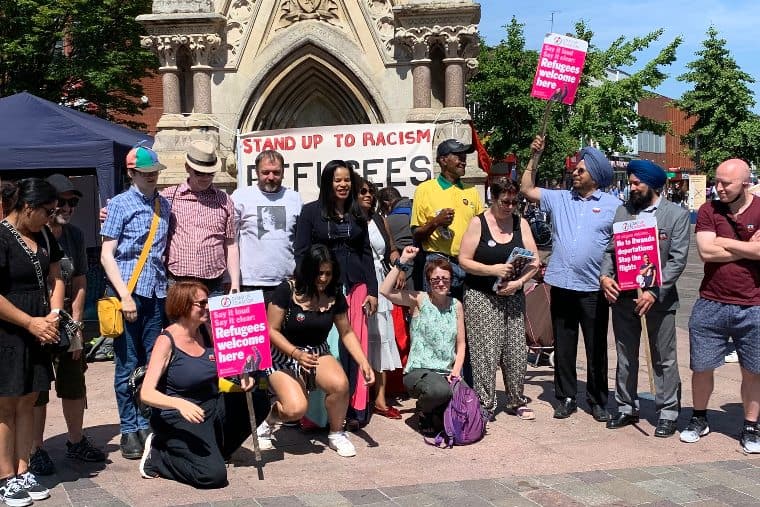 Anti-racists in Leicester say no to Rwanda deportations. (Picture: Leicester Stand Up To Racism)

Anti-racists are ­keeping up the fight against the Tories’ racist plan to deport migrants to Rwanda after the Home Office said it was ­“determined” to ­implement it. They staged protests in towns and cities across Britain last Saturday.

The day of action was part of the #StopRwanda ­campaign launched by the TUC union federation, Stand Up To Racism (SUTR) and the Care4Calais charity. On the day of action, Weyman Bennett, SUTR co-convenor, slammed the “heinous Rwanda detention policy” .

In Leicester, around 40 people demanded an end to the Rwanda deportation policy. In Coventry, ­anti‑­racists unfurled a banner reading, “Solidarity knows no borders,” and campaigned in the town.

The protest in Cambridge was joined by Labour and Green party councillors, trade unionists, Black Lives Matter (BLM) activists and Care4Calais volunteers. In Oxford, activists demanded the closure of the nearby Derwentside ­immigration detention centre.

The protest was backed by the local SUTR group, Oxford Against Immigration Detention and Asylum Welcome. Meanwhile, in Tower Hamlets activists campaigned in the east London borough’s Roman Road market.

The #StopRwanda ­campaign is backed by 11 trade unions. Mark Serwotka, PCS union general secretary, said, “It’s time for the government to show humanity to the people who come to our shores for refuge.”

Clare Moseley from Care4Calais said, “Many people oppose the shockingly brutal Rwanda plan and we are delighted to see so many of them making their voices heard today. We have seen up close the human cost of locking people up and telling them they will be sent to Rwanda.

“From suicide attempts to hunger strikes it was harrowing. We now have six weeks to show the government that this cruel plan is not what the British public wants.”

The day of action came after charities’ legal challenge to the Rwanda plan was delayed until September last week. Detentions Action said it was a “win” as they would now have the time they need to prepare” the case. But straight away the Home Office said it was “determined” to push through the racist scheme.

People traffickers are small-time criminals—whose business model depends on racist borders.  If refugees had safe routes to Britain, they wouldn’t be forced to rely on smugglers.

Anti-racists have to fight against the Rwanda plan—and to end Britain’s system of detentions and deportations.

Anti-racists will celebrate 20 years of Love Music Hate Racism (LMHR) at a major music festival in east London on Saturday.

The One Borough festival will take place in Parsloes Park in Barking and Dagenham. The borough was a key battleground against the Nazi British National Party (BNP) in the 2000s.

LMHR is hosting a marquee with an exhibition and panel discussions. The marquee is named after Blair Peach, the teacher and Socialist Workers Party member.

He was killed by police on a counter-protest against the fascist National Front in Southall, west London, 1979.