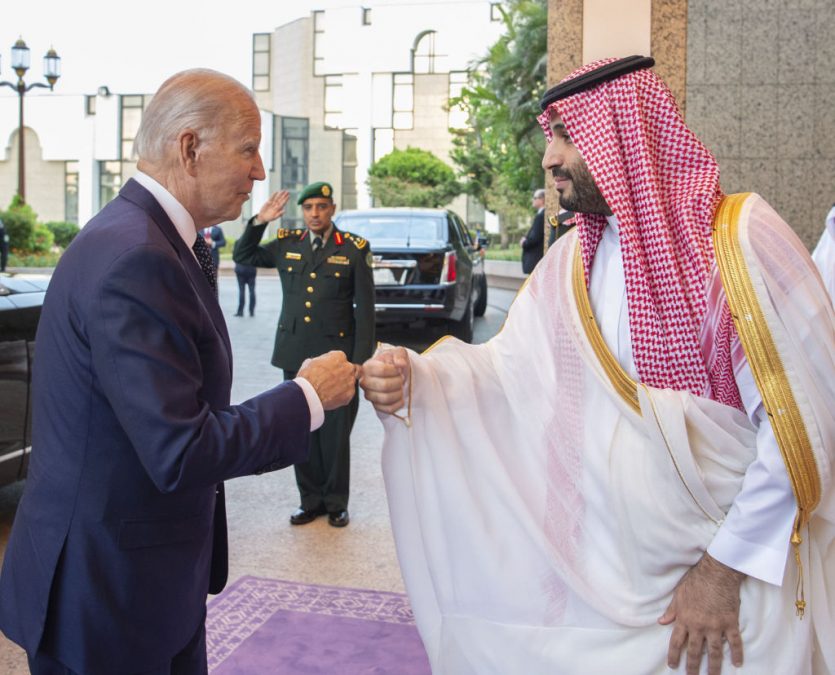 Joe Biden just returned from his Middle East trip, where he went hat in hand to some of the world’s most brutal, US-backed despots in a desperate bid to boost oil production. All he got was a fist bump from Saudi tyrant Mohammed Bin Salman.

Joe Biden’s trip to the Middle East was a strangely uniting event. Whether you’re a progressive opposed to US coddling of brutal dictators or a conservative disgusted to watch a US president supplicate himself to a foreign ruler, Biden’s visit had something for everyone to dislike.

The trip as a whole was already a major reversal for the president. Charging that human rights should be “the core of our engagement with the world,” Biden had earlier vowed to “hold accountable” Saudi Arabia and cut off aid and arms sales to the country, in large part to draw a contrast on the campaign trail between himself and Donald Trump, one of the more subservient presidents to Saudi interests.

Yet here he was now, floating the restarting of “offensive” weapons sales, making excuses for his visit in a Washington Post op-ed, and giving a fist bump to the country’s despotic monarch, an image the Saudi government wasted no time in exploiting for PR purposes. That this comes after months of Saudi officials thumbing their noses at the president makes the optics all the worse.

Biden and his team have tried to paper over all this by claiming he’d in fact used his meeting with Mohammed Bin Salman, the Saudi crown prince, to press him on his assassination of journalist and US resident Jamal Khashoggi. What actually happened is now a matter of dispute.

Biden told the press he had “raised it at the top of the meeting” and that he was “straightforward and direct in discussing it.” Saudi officials contradicted the president, telling reporters what followed was, in the New York Times’ retelling, “a brief and less contentious exchange that focused on human rights without dwelling on the killing.” The matter has now become a minor diplomatic incident, with the White House insisting on Biden’s version of events in the face of Saudi denials.

It’s hard to say what the truth is, since no one here is particularly trustworthy. Saudi officials have every incentive to undermine Biden, while the president is a serial fabricator who, to put it generously, likes to exaggerate his accomplishments. Still, it’s telling that for all the effort Biden went to to smooth things over, the Saudi leadership still ended his visit by trying to publicly embarrass him.

Bin Salman wasn’t the only autocrat the president embraced on the trip. Biden also had a friendly meeting with Abdel Fattah el-Sisi, the bloodsoaked dictator who rules Egypt and similarly counts US citizens among those he’s had tortured — their very first meeting since Biden was inaugurated. In their joint statement, the two leaders celebrated and pledged to deepen the US-Egyptian partnership, including ongoing weapons sales, with nary a mention of the copious human rights abuses and absence of democracy in the country.

Meanwhile, Biden’s meeting with the president of the United Arab Emirates (UAE) went ahead despite the fact that just days before, his government had detained a US citizen who also happened to be Khashoggi’s lawyer, sentencing him to three years’ prison the very day of Biden’s meeting. Biden and his UAE counterpart doggedly ignored reporters’ questions about it, even as rights groups condemned the act and called on the president to do the same. Worse, UAE officials claimed they’d carried out the arrest in coordination with US authorities, forcing the White House to quickly deny the charge. None of this stopped Biden from heaping praise on the regime nor from inviting its president to Washington.

All this was preceded by Biden’s unsurprisingly friendly visit to Israel, a country that continues to violate international law with its illegal occupation — and increasingly annexation — of Palestinian land, and which just assassinated US journalist Shireen Abu Akleh, the latest in its long history of killing American citizens with impunity.

In a searingly illustrative example of how the United States’ unconditional backing of Israel’s government undermines international law more generally, Bin Salman reportedly waved away concerns about the Khashoggi killing by pointing to Abu Akleh’s murder and Biden’s failure to do much about it. He also excused himself by claiming he hadn’t personally ordered the killing, “the same way George Bush did not order the abuse and torture at Abu Ghraib prison in Iraq,” a reminder of the long shadow that administration, and the rehabilitation of the criminals who staffed it, has cast over US moral authority.

For those counting, that’s four separate governments on this trip that violate international law and have persecuted, sometimes brutally, US citizens. Biden didn’t just fail to do the bare minimum to hold them to account — he pledged deeper cooperation and friendlier relations.

The trip may in the end be the final nail in the coffin for Biden’s already tenuous vision of the United States leading a coalition of democracies against the world’s autocracies, an impossible case to make after the sight of the president rubbing shoulders with some of the world’s worst tyrants. Biden’s “alliance for democracy” more and more looks like what much of the world already sees it as: a geopolitical tool to isolate and punish unfriendly governments, obvious double standards and human cost be damned. Just last week, Washington chose to dramatically worsen the humanitarian catastrophe it’s helped create in Afghanistan, passing a military spending bill that effectively cuts off the humanitarian aid its people depend on to survive, all supposedly in the defense of human rights against the ruling Taliban.

The trip was also the kind of undignified ingratiation that is rare to see from the leader of what is at this point still the world’s only superpower, a clear example of how the continuing failure to transition away from fossil fuels — putting the US at the mercy of oil-producing autocrats — weakens the United States on the global stage.

After all this, it seems Biden’s not going to get what he wants out of this display anyway. French president Emmanuel Macron was overheard telling Biden last month that neither the Saudis nor the UAE can increase oil production very much in the short term, and Biden left the Middle East without a firm commitment to any such boost, with oil prices swiftly rising. “The message is . . . [OPEC+] isn’t remotely interested in what Biden is trying to achieve,” one analyst told the Guardian. An empty-handed Biden was greeted on a Washington tarmac by reporters challenging him about the fist bump. (“Why don’t you guys talk about something that matters?” a frustrated president replied.)

It seems, then, that the trip’s most lasting legacy might be the advancing of Trump’s goal of an anti-Iran, US-led alliance in the Middle East, something Biden has pursued with gusto since coming into office. But this is hardly a cause for celebration, since this move is most likely to raise tensions in the region, drag Americans into more regional conflicts, and at worst, set the stage for another terrible war.

One thing’s for sure, though. War hawks love to charge that peace deals and negotiations between adversaries strengthen the hand of autocrats and undermine the rule of law. But it’s hard to imagine a bigger gift to the lawbreaking despots of the world than the past week Biden spent with his friends.