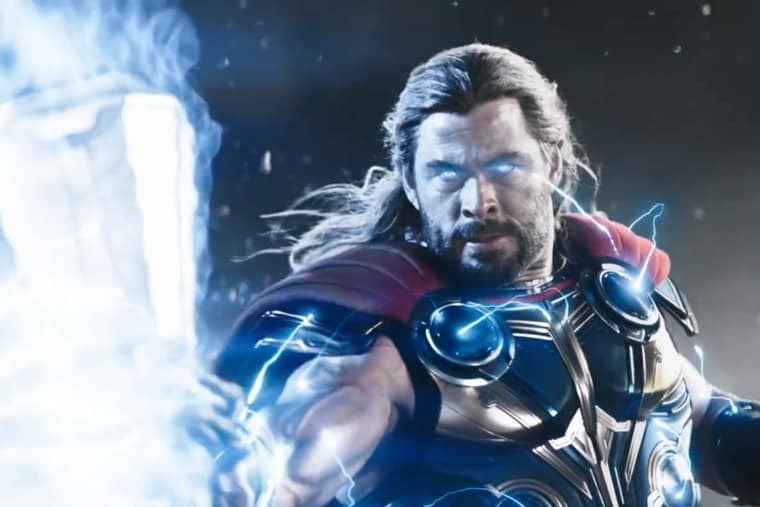 Chris Hemsworth as Thor in Thor: Love and Thunder.

Director Taika Waititi returns to the Marvel universe with a follow up to his Ragnorak, released in 2017. His last outing was a film which breathed new life into the Thor franchise with a pitch perfect blend of self deprecating humour and spectacle.

We re-join Thor Odinson, played by Chris Hemsworth, at a low point. He’s lost his dad, his brother, and his mates—all killed by his sister Hela.

His home, the space-city of Asgard, has been reduced to a twee village in Norway heavily reliant on Disney-style tourism. He’s also split up from his ­girlfriend, Jane Foster, played by Natalie Portman. As a result, he’s having an existential crisis as a mythological god and superhero.

“Another great Thor adventure!” he triumphantly declares oblivious to the fact his attempts to help an alien planet has left nothing but destruction. Then he finds out about Christian Bale’s Gorr the God Butcher, a serial killer out to destroy every deity in the cosmos.

His attempts to stop Gorr re-unite him with Jane, but she’s been transformed into another version of Thor via his original hammer, Mjolnir.

Both Thors weild hammers that behave like ex-partners themselves. She’s got the powers but is still working on her superhero catchphrases.

Will two Thors, the Valkyrie (Tessa Thompson), gladiator Korg (Waititi) and two giant Space Goats be enough to stop Gorr? This film is a fun mixture of the sacred and the profane.

It’s partly based on the 2014 comic series by writer Jason Aaron and artist Russell Dauterman which outraged sexists by daring to make the Mighty Thor into a woman.

Hemsworth is a skilled ­comedian who injects insecurity and vulnerability into the character of the seemingly invincible Thor. But the film is stolen by Russell Crowe playing Zeus with an outrageous Greek accent.

Legend has it, Waititi wanted the option of Zeus to have a British accent so all his scenes were shot twice. Zeus performs before a convocation of gods from across different pantheons as if he were a bad magician at a children’s party.

Go and see it. “Another great Thor adventure?” Yes, it is.

Thor—Love and Thunder is out at cinemas now