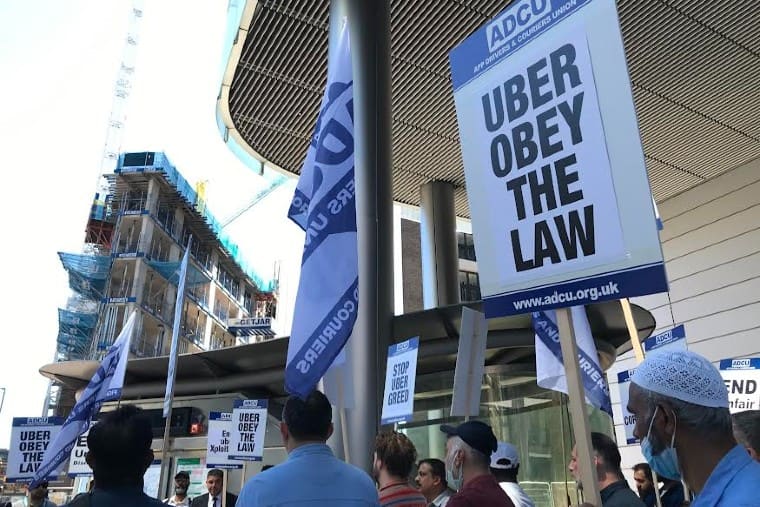 The leaked documents revealing the rampant corruption of taxi‑hailing company Uber were shocking but came as no surprise.  Uber has always been a company built on lies, corruption and exploitation of workers.

But despite all of their corruption and lobbying of powerful politicians, Uber has never been able to crush resistance from those it employs.  We have fought Uber in the courts, which led to the Supreme Court ruling that Uber drivers were not self-employed.
Similar employment battles that target Uber and the gig economy are going on in California in the US and the EU.  In almost every country the company operates in, there have been protests or strikes by workers. They know better than anyone just how exploitative Uber’s business model is.
Now Uber has to think of other ways to rehabilitate its image.
One way is to get powerful unions on its side or even create their own unions.  In the US, Uber pumped millions into creating the Independent Drivers Guild trade union. It signed a recognition deal in Canada with the United Food and Commercial Workers union.
Now, Uber has signed a voluntary partnership deal with the GMB union in Britain.  Signing with these big unions works in Uber’s favour and is a great way to undermine real struggle by workers. And with big unions on side, the leadership of the Labour Party has also shown it will stand with Uber.
As well as attending the GMB conference, Uber also participated in the Labour Party conference.
Labour politicians might believe Uber has changed—but it hasn’t.  And Uber drivers still desperately need basic workers’ rights.
Uber needs to give workers fixed hours, so there is a cap on how many workers the company takes.  This will mean fares won’t keep going down, and pay won’t continue to plummet.  But for this, we need to fight.
Yaseen Aslam

This month marks the 5th anniversary of the death of Rashan Charles, a 20 year old black man who died after contact with the police in Hackney, east London.  Police wrestled Rashan to the floor and put him in a stranglehold.  He died just over an hour later.
Rashan was a well-loved son and brother and a father to a young daughter. But, as usual, the Tory press tried to slur the victim. They initially said that Rashan had died of a drug-induced heart attack after swallowing a package of cocaine.
Pathology tests later revealed that he had consumed paracetamol and caffeine. The officers’ failure to call an ambulance after Rashan stopped breathing contributed to his death. The killing of Rashan sparked a wave of angry protests outside Hackney’s notorious Stoke Newington Police Station.
A racist justice system ultimately denied Rashan’s family justice, and the IOPC police watchdog acquitted the officers responsible. But campaigners vowed to keep his memory alive.
When Black Lives Matter protests took place after the killing of George Floyd, activists in Hackney quickly drew parallels between the two events.  The fight continues against a racist system that inflicts police brutality on young black men.
Dean Ryan

Workers shouldn’t have to work in extreme heat

For the first time ever, a red warning for extreme heat has been issued in England and Wales, meaning there is a “very likely” risk to life.
The risk isn’t just to high-risk and vulnerable groups. Even fit and healthy people are at risk of dehydration, muscle cramps, rashes and fainting. Extreme cases can even mean loss of consciousness.
Despite this, there is no legal maximum temperature to work in, and employers are largely expecting staff to show up on shift.  Construction workers, refuse collectors, nurses, drivers, or anyone working outside air-conditioned offices face the brunt of this apocalyptic heat.
The impending climate catastrophe is driving the heat wave.
As capitalism and the drive for profit push the earth to ever more extreme temperatures, the risk to all life cannot be understated.
Rena Niamh Smith

US ‘planned coups in lots of places’

This week a shockingly casual anecdote by US former ambassador to the United Nations, John Bolton, showed how imperialist invasion is considered a normal part of US politics. He said on US news channel CNN, “As someone who has helped plan coups d’etat—not here but, you know, other places—it takes a lot of work.”
When pressed to give an example of how hard a coup is to arrange, Bolton brought up the failed attempt to oust Venezuelan president Nicolas Maduro in 2019. During his time as national security adviser Bolton publicly supported opposition leader Juan Guaido’s bid to use the military to get rid of Maduro.
We know that US politicians conspire and collaborate to extend influence.  But it was still shocking that the interviewer reacted so calmly to what Bolton said. The US has played its part in coups and military invasions and installed puppet regimes from Iraq to Vietnam, leaving a trail of blood in its wake.
Bolton has shown that US politicians don’t feel a need to hide their imperial crimes.
Edward Harris

The harsh reality of NHS cuts

I keep thinking about the old days when we had an A&E in the local hospital. The last time I had to phone an ambulance was at work on a night shift.  The 111 operators told me they had one available ambulance, and it was in Kings Lynn.
The person I was supporting was in a seizure, and an ambulance took  40 minutes to arrive.  My Dad might have made it if we had a local hospital with ambulance minutes away.  I try not to think about it.
Tony Speck

Watching an uprising unfold in Sri Lanka, it’s clear to me that  when people are forced to revolt, there’s nothing that can stop them.
We can storm government buildings and enjoy what the rich have, and we do not. We should do it here.
Eliza Lowe

Rail strikers are an inspiration

As a nurse I cheered when I heard that railway workers would be striking again.  The price of simply existing is rising, and workers need to come back and fight back now.
More strikes give me and others in my workplace hope that we can fight back for better pay and conditions. Leaders of other unions should take note.
Emily Clipper

Johnson let people die
Don’t forget Boris Johnson’s record when it came to the handling of the coronavirus.
He was at least three weeks late to act on anything.
John Lawson
On Facebook
Original post