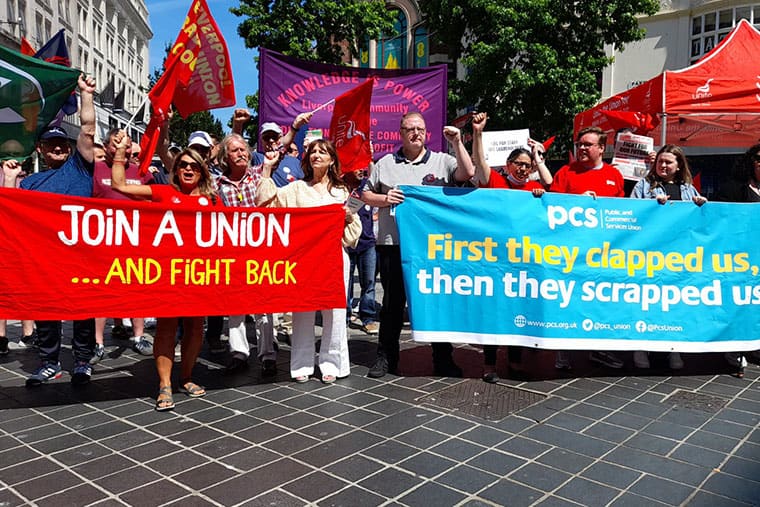 Unions in Liverpool came together last Saturday to hold a Big Union Fair in the city centre.  Building upon the wave of interest in trade unions created by the RMT rail union’s strikes, the message was, “Now is the time to join a union.”

They had stalls with literature and materials for their current disputes and campaigns. There were union banners and flags, activists played protest music, and speakers took turns on the megaphone.

The fair was supported by regions, branches and officers from Unite, UCU, RMT, PCS, Unison, Liverpool TUC, NEU, Bfawu, CWU and FBU. Seven unions had a presence on the day. Following the success of the event, more will be organised over the summer.

Unison union members across 94 universities are balloting for strikes over pay.

The UCEA bosses’ group has made a paltry pay offer as inflation soars. It includes 3 percent for most higher education workers and between 9 and 3 percent for those on pay points 3 to 19—all real terms pay cuts.

Unison says, “We can’t afford less than an inflation‑busting pay rise of at least RPI+2 percent.”

A group of unions met with bosses’ body the Universities and Colleges Employers’ Association (UCEA). It said it would not offer workers anything above a 3 percent pay rise. This assault must be a call for action by the UCU union.

Workers at four colleges across the north west are set to strike over pay on Thursday and Friday of next week and on 4,5 and 8 August.

For more than a decade, college workers have suffered real terms pay cuts of up to 35 percent. UCU are saying enough is enough. Already workers have won pay rises at Hopwood Hall College and Bury College.

Brewery workers in Samlesbury, near Preston, began a three-day strike last Saturday after bosses offered them a 3 percent pay increase.

The over 200 GMB union members make beers including Stella, Budweiser and Becks.

GMB organiser Stephen Boden said, “Our members are being taken for a ride, and it’s not good enough. A massive real terms pay cut in the middle of a cost of living crisis is downright cruel.

“GMB has tried to negotiate with Budweiser repeatedly, but they’re not listening. Now they will have to deal with the consequences.”

After not being offered a pay rise for eight years, south London workers who drive children with special educational needs are taking action.

The GMB union members were set to strike on Thursday and Friday.