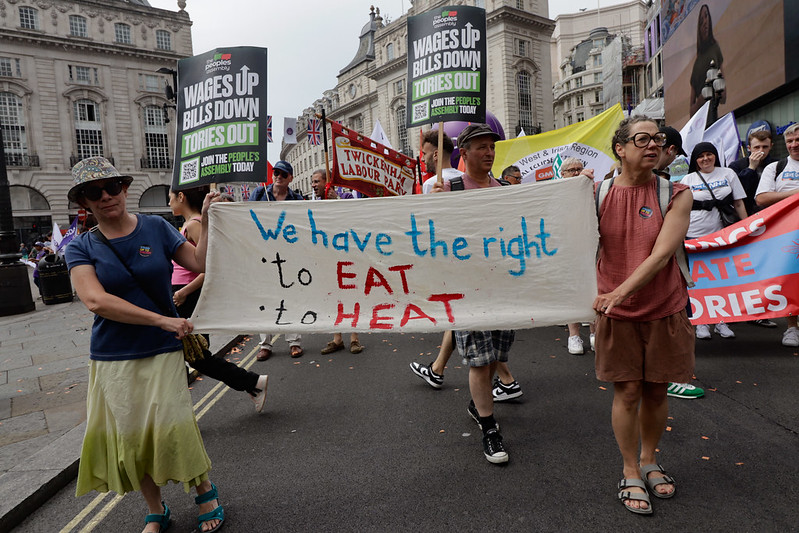 The costs of food, fuel and rent are all going up. Community campaigns are fighting back. Kate Bradley has a round-up of ways to get involved.

Low wages are a key part of the cost-of-living crisis. The Tories want you to believe that rising wages will lead to a ‘wage-price spiral’, pushing prices up even further – but as Kate Deer has argued, rising wages are not the cause of this crisis, and lowering them won’t be the solution. It’s class war, making workers shoulder the burden of the cost-of-living crisis rather than letting profits take the hit. As the RMT and other striking workforces have made clear this summer, the best way to fight for better wages is to organise at work – unionise, negotiate higher pay, and consider taking action if you meet resistance. Even criminal barristers have been on strike this summer to fight for a pay rise for the lowest paid in their ranks.

The best place to start is to talk to your colleagues and join a union (ideally one already organising your colleagues, or one offering the best support to take action). You can read Ian Allinson’s upcoming book Workers Can Win for some tips on organising in both unorganised and well-unionised workplaces – pre-order it here! If you’re not in a workplace or can’t currently organise at work, you can offer solidarity to those workers who are fighting: contribute to crowdfunders, do a whipround at work to support strike funds, turn up to your local picket lines, and share strikers’ news and media.

The spiralling cost of energy is a key part of the cost-of-living crisis. Big companies like Shell and BP are making massive profits from your rising bills. Bills are rising not only because of short-term supply issues as a result of Covid and the Russia-Ukraine war, but because of a long-term reliance on fossil fuels and unsustainable forms of energy production. The climate movement’s aim to transition to genuinely renewable energies is necessary to stabilise global energy supplies and prevent large companies profiting by charging more for depleting commodities like coal and gas. Fights against fracking and the re-opening of coal mines are, therefore, fights against the cost of living on a dying planet. rs21’s pamphlet We Only Want The Earth discusses the current climate movement and different ways to get involved.

For more immediate action to reduce your costs, you can join the fight against runaway energy bills. From October 1, a group called Don’t Pay is pushing to get 1 million people to pledge to cancel their energy bill payments (if they pay by Direct Debit). With thousands of people already signed up, they are building local organisation to make the infrastructure needed to pull this off, including mutual aid networks, knowledge-sharing sessions and campaigning resources. The tactic is simple: a consumer strike that uses the collective refusal to pay to hit energy companies’ pockets until the government or energy companies lower prices. If you pay your energy bill by Direct Debit, you can sign up to take part here. However you pay your bill, you can sign up as an organiser to help build the campaign quickly through leafletting, doorknocking, stickering and other local actions.

After a brief freeze on social rents (between 2016 and 2020), social housing rent is now increasing, with many social tenants’ rent going up by 4.1% this year. UK private rental prices have increased by 13.5% since January 2015. With the private rental sector growing in size, this means that more people are subject to rapidly rising rents. Reports from tenants unions suggest a sudden influx of rent increases being issued by private landlords to pass the increased cost of living onto tenants. If you are a social or private tenant, you can fight this by joining a tenants’ union near you – such as ACORN, London Renters Union, Greater Manchester Tenants Union, Living Rent in Scotland, and other local unions (Ireland also has a growing renters’ union called CATU). Tenants’ unions will fight for individual members, including by resisting rent rises through direct action and representation. They also campaign against estate agents and landlords pushing up prices, and collectively they form a powerful voice to push for wider policy change.

So far, the Tories’ main response to the cost-of-living crisis has been to provide one-off top-ups and subsidies, targeted at particular groups, such as the Warm Home Discount Scheme for people on Pension Credit, Council Tax rebates, and one-off payments for benefits claimants. However, these are short-term remedies and not sustainable solutions to the rising cost of living. For benefits claimants, these payments come after years of benefits cuts, including the £20 a week cut in October 2021. These small payouts will not last long – benefits have been too low to live on for a long time.

Fighting for liveable benefits levels is not only for benefits claimants: it’s a struggle over the acceptable minimum standard of living forced on the working class. Many people reliant on benefits long-term due to disability or caring duties cannot be left behind as we fight for better pay: the government must be forced to create a social safety net that doesn’t bully, punish and starve people who rely on it. If you are a benefits claimant, you may want to join a union branch such as Unite Community, the community branch of Unite the Union, which fights for better benefits and against the punitive Universal Credit system. You can also join disability rights groups campaigning in this area, such as Disabled People Against Cuts (DPAC). Even if you are not a benefits claimant, you can take part in actions and support organisations that fight for better welfare rights.

5. Push back against debt

People in the UK owed £1,765.6 billion at the end of December 2021. This is up by £64.2 billion from £1,701.4 billion at the end of December 2020, an extra £1,212.93 per adult over the year. As costs increase, many more people will be forced into taking out expensive credit to pay for basic essentials – whether that’s re-mortgaging their homes or taking out extortionate payday loans. This is bad for debtors now and bad for all of us long-term, creating credit crunches later as large numbers of people default on debts they can’t afford to pay. If the Bank of England continues to increase interest rates, it will have an even sharper effect on those with loans where interest rates are tied to the ‘base rate’, also potentially leading to a spike in repossessions. If you’re in debt, you can seek advice from services like National Debtline.

Beyond advice services, debt resistance has not been a big part of British social movements in the past, whereas elsewhere in the world, it plays a vital role in challenging the capitalist system. Recently, however, there have been some UK-based projects organising more creative actions against debt. For example, in 2019, a collective of artists called Bank Job bought up and then cancelled £1.2 million in payday loan debt in Walthamstow, East London. Together Against Debt, part of Debt Justice, has started to organise debtors in recent years to ban the use of bailiffs and work towards uniting debtors in fights against their money lenders. Actions against changes to the conditions of student debt will also become more important as fees rise and the repayment threshold gets lower, leaving more low-income graduates with cumbersome monthly payments taken straight out of their wages.

The Tories’ last decade in power has been devastating, exacerbating this crisis by attacking workers’ rights and holding down real wages and benefits. They have facilitated profit-making through Covid while hundreds of thousands of people die from the virus – and while millions become ill with Long Covid. Though many fear the Labour Party would be a weak force in their place, it’s still a priority to kick out the Tories. It’s harder to fight in the face of waves of repressive legislation, virulently pro-capitalist policies, and vicious attacks on migrants, trans people and the wider working class. Hold Tory MPs in your area to account, and take part in protest movements that oppose the Tories’ divisive and violent actions. Whether it’s those movements mentioned above, or taking part in police abolitionism, anti-fascism, anti-racist organising, migrant solidarity or trans-inclusive feminist organising (just as examples!), we all have our part to play in making the UK harder for the Tories to rule.