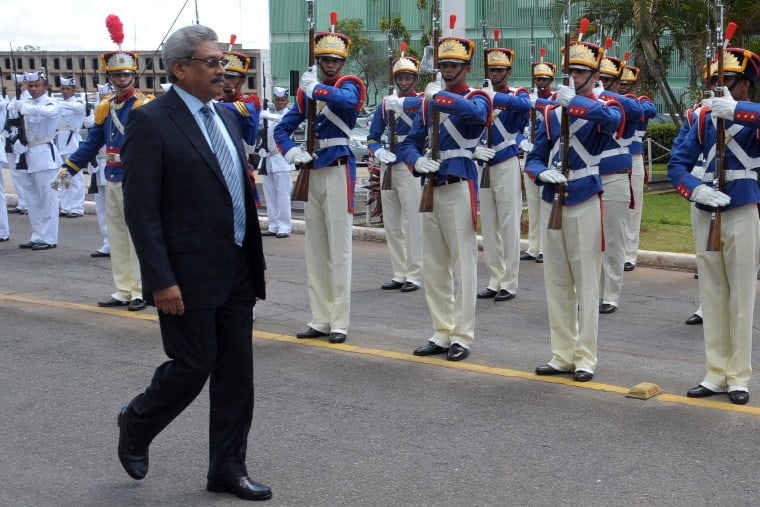 Gotabaya Rajapaksa during an official tour of Brazil in 2014. (Picture: Ministério da Defesa)

Establishment politicians in Sri Lanka are hoping they can ride out the wave of protests gripping the island and reinstall themselves in power.

Huge militant protests last week forced out president Gotabaya “Gota” Rajapaksa, the head of the hated family dynasty that has dominated politics for almost two decades. That news led to widespread jubilation in the streets—and a crisis of legitimacy in government.

The leaders of political parties did not join the celebrations, instead they plotted on how to bring the protest movement to an end. The official opposition was keen to be pictured meeting with protest leaders last weekend. Their reluctant embrace is an attempt to smother the movement.

He and the leaders of other parties are planning to install a new president for the next five years. But MPs will be the only people allowed to vote in the closed election.

As head of the biggest party in parliament, Wickremesinghe is predicted to win the “election”. But most protesters rightly associate him with corruption and the Rajapaksa regime.

The new president will retain all the draconian powers that Gota amassed, and will likely direct them at the masses of people still seething at the prices rises and food shortages that are destroying their lives.

Reverend Jeewantha Peiris, a protest movement leader, said the sudden declaration of the state of emergency is meant to intimidate the protesters. “We have been protesting peacefully for 100 days, but there was no state of emergency. Then why now?” he told Al Jazeera news.

“We see that Ranil Wickremesinghe is getting ready for oppression but our struggle would not be oppressed by these actions. We have a democratic right to protest and we will continue our struggle until we achieve our last demand.”

Despite the machinations at the top, life for ordinary people at the bottom shows no sign of improving—and that means it can only be a matter of time before the movement reignites. Sri Lanka’s debt default means it cannot import the huge amounts of food, fuel and medicines that people need after months of shortages.

And circling above them, waiting for the political dust to settle, are the vultures of the International Monetary Fund (IMF). The IMF insists they want only to “stabilise” the Sri Lankan economy.

But they, and the establishment politicians, are agreed on the need for a massive round of cuts and asset sales to fund this process. This will surely be the next key battleground, with the state on one side—and workers, farmers, fishers and the poor on the other.