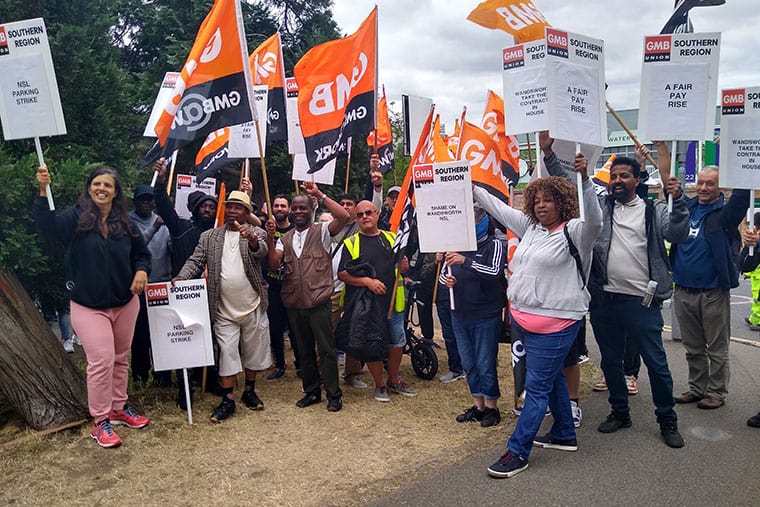 Traffic wardens in Wandsworth, south London, this week walked out on the two hottest days of the year on Monday and Tuesday. That makes 13 days of strikes by the GMB union members—with another five to come from Monday of next week.

The outsourced NSL workers are demanding pay parity with wardens in the neighbouring borough of Merton. They earn £17.25 an hour—£6 more—and are employed directly by the council.

The baking heat on the picket line was a reminder of bosses’ attitude to health and safety. Workers say wardens on mopeds asked to wear lighter clothing last week, but were told they had to go out in regulation leather jackets.

And bosses expected wardens to be out on the beat this week despite the dangerous temperatures.

It’s not just the heat that’s a threat to the wardens’ health—it’s the cold and the damp too. One striker said, “Recently one of our colleagues, in their 60s, was out a lot in the rain and got pneumonia.

“They went home and their lungs collapsed. They were in hospital for many days, but never recovered. Many of us went to their funeral earlier this month.

“With some of the previous contractors they let you shelter if it was raining, but NSL say you have to stay out in the rain. They are unsympathetic. Plus, you are walking at least 16 miles a day.”

Another said, “I have diabetes. The job is so stressful my blood sugar levels shoot up. Sometimes it is so bad I can’t even see properly after a day’s work. The doctor can’t understand why it is so high. But since I have been on strike I don’t feel sick any more. I don’t even feel tired.”

Workers are also angry about the induction process, with trainees inducting trainees. They said one worker, who has only been on the job five weeks and is still on probation, is training the latest arrivals.

This means wardens are likely to issue wrong tickets and aren’t equipped to deal with angry or violent drivers.

The Labour-run council should bring the wardens back in house immediately. After weeks of refusing to budge, NSL has finally agreed to talks on Monday of next week.

As the talks begin, it is essential the strikers increase the pressure on their bosses and on the council. That means more strike days, demanding that Labour councillors support their cause, and spreading the word about the dispute in the movement.

Workers ballot for strikes in Scotland

Some 25,000 school and council workers in Scotland are making the most of their last week to vote on pay strikes.

Unison union members have until Tuesday of next week to vote over a 5 percent pay offer put forward by the local government body, Cosla.

The union is recommending workers in schools, early years education and waste and recycling vote yes to action.

It could mean workers shut schools and other workplaces in the first few weeks of the new academic year in August.

Bin fights in Sandwell and Newham

Outsourced refuse workers in Sandwell in the West Midlands were set to begin strikes next week.

The GMB, Unite and Unison union members plan to walk out on Thursday and Friday of next week and on 4, 5 and 8 August. Some 95 percent of GMB members voted to strike.

Meanwhile, around 100 bin workers in Newham, east London, are balloting for strikes over pay and conditions.

The ballot of Unite union members closes on 3 August.

“Unite always makes the jobs, pay and conditions of its members’ its key priority and it will be providing our workers in Newham with its total support until this dispute is settled.”