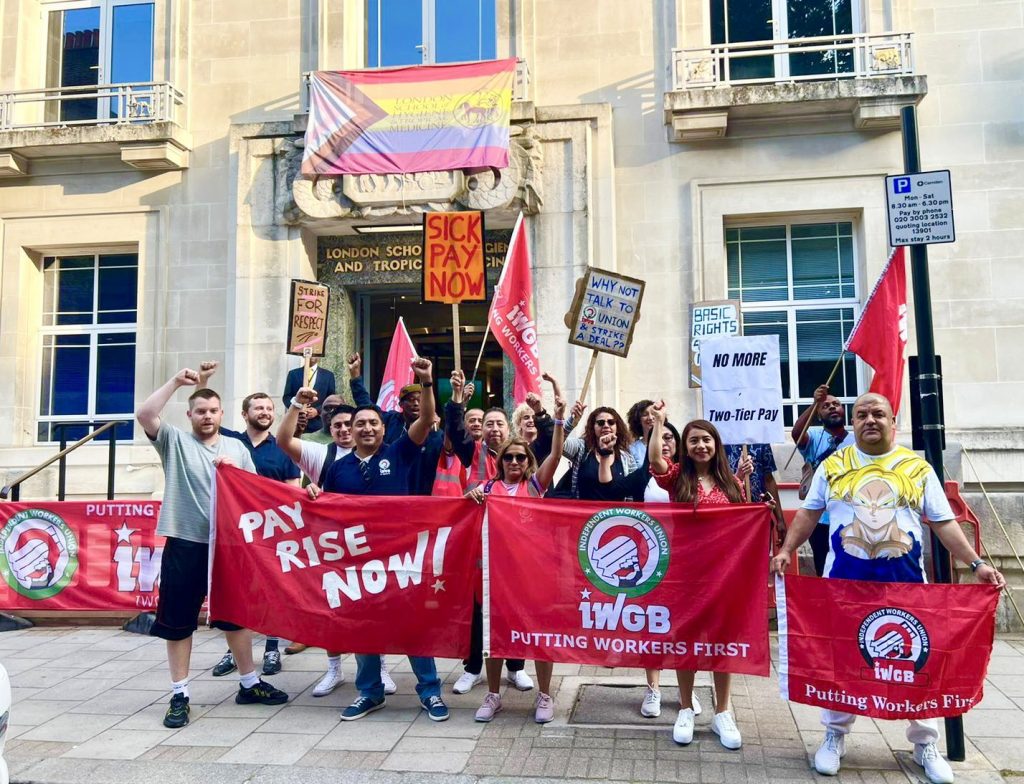 Outsourced workers at the London School of Hygiene and Tropical Medicine recently won a commitment from management to bring them in-house. Now they are on strike after a unanimous vote through their union, IWGB, to take industrial action over pay. Charlotte Powell, a former outsourced worker at the University of London, reports.

Outsourced cleaners, porters, security guards and post room staff at the London School of Hygeine and Tropical Medicine (LSHTM) have been out on strike this week after a unanimous vote for strike action in June.

The ballot to strike over pay was organised through their union, the Independent Workers of Great Britain (IWGB). After the workers successfully won a commitment from the university to bring them in-house this August, it was revealed that management intends to bring them in on wages below any existing pay grade on the university’s pay scheme.

Guy Matuka, a post room worker at the university, said:

We worked all through the pandemic keeping the University going. But as migrant workers, we were outsourced until recently. We are still discriminated against. We are paid below the lowest rung of the university’s pay structure. The cost of living is increasing and we are struggling to make ends meet. Today, we are demanding dignified pay so that we can support ourselves and our families.

The strike at LSHTM is both a class struggle and an anti-racist struggle.

As in many universities, LSHTM management have been operating a two-tier workforce, with support staff outsourced on worse pay and worse conditions. The outsourced workforce is mainly migrant, black and brown workers, while the in-house workforce on higher pay is majority white. The university previously attempted to introduce a segregated sign-in system, where the outsourced workers would have to use a fingerprint scanner to sign in and out, while academic and other support staff would carry on as usual. This plan was retracted after the workers organised with IWGB to campaign against it.

Last December, a report was published highlighting structural racism at the university. According to that report, ‘the colonial attitudes inherent in LSHTM’s historical mission negatively impact students and staff of colour today.’ But the report barely mentions the conditions of the outsourced staff now on strike at LSHTM.

LSHTM management has engaged in various union-busting tactics. It has consistently refused to negotiate with or recognise IWGB, despite the vast majority of outsourced workers now being members of that union. In April they suspended four IWGB members for protesting peacefully outside the university over pay. Three of these workers have now been given written disciplinary warnings but the fourth worker and two others are facing further disciplinary action over trade union activities. IWGB is now pursuing a legal claim of blacklisting against the university.

Betty Leon, Cleaner at LSHTM and Vice-Chair of the Universities Branch (IWGB), said:

The cost of living right now is rising every day. Water, electricity, transport and food have gone up in price. I am a mother and I am raising two children and I need to be able to support them. We are demanding pay that is equal to colleagues with similar responsibilities and allows us and our families to live with dignity. I voted to strike because LSHTM has not taken us into account. They do not listen to our demands. They will not recognise our union. They refuse to meet with us and they refuse to meet with our union.

The story of these workers is not unique. Hundreds of public and private institutions around the country use outsourcing to operate a two-tier workforce. It is often a racist practice and it always divides the workers at those institutions into silos, making it easier to exploit them. But the fightback against outsourcing is picking up pace. Outsourced workers at Barts NHS trust won in-house after taking strike action in February with Unite the union. Outsourced workers at the Department for Business, Energy and Industrial Strategy (BEIS) won parity of terms and conditions with their in-house colleagues after taking strike action last year.

Not only are workers winning against outsourcing, they are also building solidarity despite the dividing lines imposed by management. At LSHTM, 126 academics have written an open letter to senior management in solidarity with the striking workers. In it, they raise concerns about the ‘second class’ treatment of outsourced workers, which they say ‘tarnishes the reputation of the school.’ During the UCU strikes earlier this year, rs21 members reported that security guards at one university had been asked by management to spy on the strikers and report names of workers (and students) on the picket lines. They refused point blank to comply with those requests, having previously experienced solidarity from academic staff during their own dispute.

Outsourcing is just one of the many ways the working class and our power in workplaces is fractured and divided. But every successful campaign for parity and equality in workplaces, and every successful strike over pay, is another blow to the mass exploitation of workers that makes the rich get richer and the poor get poorer. Support these workers however you can – see below for a list of ways to support. Hasta la victoria!

How you can support

STRIKE UPDATE@LSHTM has been trying to intimidate strikers & (likely illegally) using agency workers to cover shifts. But the workers are undeterred.

Tomorrow is your last day this week to come down to support!

Join our protest tomorrow at Keppel St at 10am! pic.twitter.com/MZ416Q2IUT