Home / News / On Military Spending, the Establishment’s Inflation Hawks Are Nowhere to Be Found 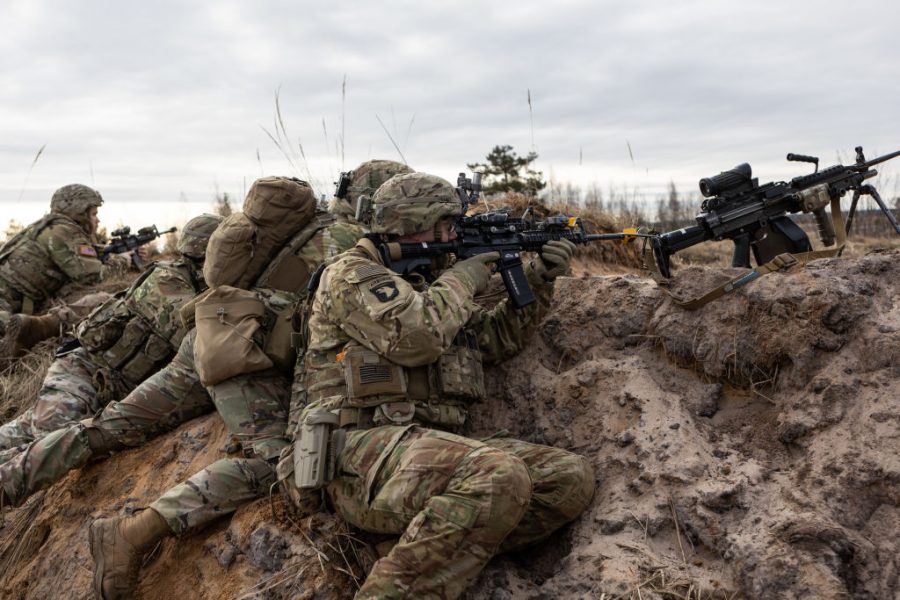 The House has approved an $850 billion military budget, twice as much as Biden’s stimulus checks cost. Yet somehow, we aren’t getting panicked screeds from the corporate establishment about how a massive injection of federal spending is going to turbocharge inflation.

Members of the US Army participate in a military exercise on March 8, 2022, in Adazi, Latvia. (Paulius Peleckis / Getty Images)

That astronomical amount is $37 billion more than Joe Biden requested and $71 billion more than last year’s bill. If enacted, it would represent a $109 billion spike from Donald Trump’s last military budget and $231 billion from Barack Obama’s final budget.

Among supporters — 180 Democrats and 149 Republicans — Russia and inflation were two of the most popular justifications for the increase. Both are flimsy rationales.

In 2020, the United States outspent Russia militarily 13 to 1 (or 18 to 1, if you include the collective military expenditures of the United States and its fellow NATO member states). It’s unclear how further widening that gap advances the well-being or security of the average US worker — what’s a 14- or 15-to-1 ratio supposed to accomplish that a 13-to-1 couldn’t? Nor is it clear how fattening the military’s coffers will bring Russia’s invasion of Ukraine to a close. In reality, investing in a diplomatic settlement between Ukraine and Russia is the only viable path forward.

How about inflation? Supporters of the bill presumably think that the Pentagon experiences price hikes the way ordinary people do. It does not. First off, the Pentagon doesn’t buy the same stuff the public does. For the things it does purchase, the Pentagon uses its immense purchasing power to negotiate down prices, and many of its current contracts are fixed-price contracts, meaning that it’s partially shielded from inflationary pressures. Buying into the inflation talking point only encourages further price gouging by military contractors.

It’s also a blatant double standard. For months now, the corporate media, centrist Democrats, and conservative figures have been fulminating about the disastrous impact of federal spending on inflation. In a November 2021 speech, Biden conceded that prices have soared since “people have more money now because of the first major piece of legislation I passed,” referring to the American Rescue Plan’s $1,400 relief checks.

Yet if that’s the case — and there’s plenty of evidence the inflationary effects of the relief package are overstated — then why aren’t we getting panicked screeds from the political establishment about the gargantuan military budget set to flood the economy with more demand? The military budget the House just passed for FY2023 costs more than twice as much as those stimulus checks did.

And even if the Pentagon spending didn’t boost inflation, Biden would still have to explain why it’s OK to use the federal purse to bolster the Pentagon’s buying power, but not workers’ bank accounts amid a four-decade peak in inflation.

Several provisions in Biden’s Build Back Better bill would improve ordinary people’s living standards. However, Biden appears poised to capitulate to West Virginia senator Joe Manchin’s latest rejection of the legislation, citing inflationary concerns. What’s more, Biden has not sought additional funding for his infrastructure plan (as he has with his military budget), the impact of which is being significantly hamstrung by the real effects of inflation.

By refusing to call out the inflation double standard being bandied about between military and nonmilitary budgets, Biden is accelerating the demise of his domestic agenda. And by peddling the forever-wars line that the US military must vastly outspend that of every other country, Biden is committing to a Pentagon budget that endlessly gobbles up resources at the expense of pro-worker programs.

As democratic socialist congresswoman Cori Bush wrote in a tweet explaining her no vote: “I can’t in good conscious support a bill that authorizes $839.3 billion in ambiguous defense spending while our social safety net remains completely underresourced.”