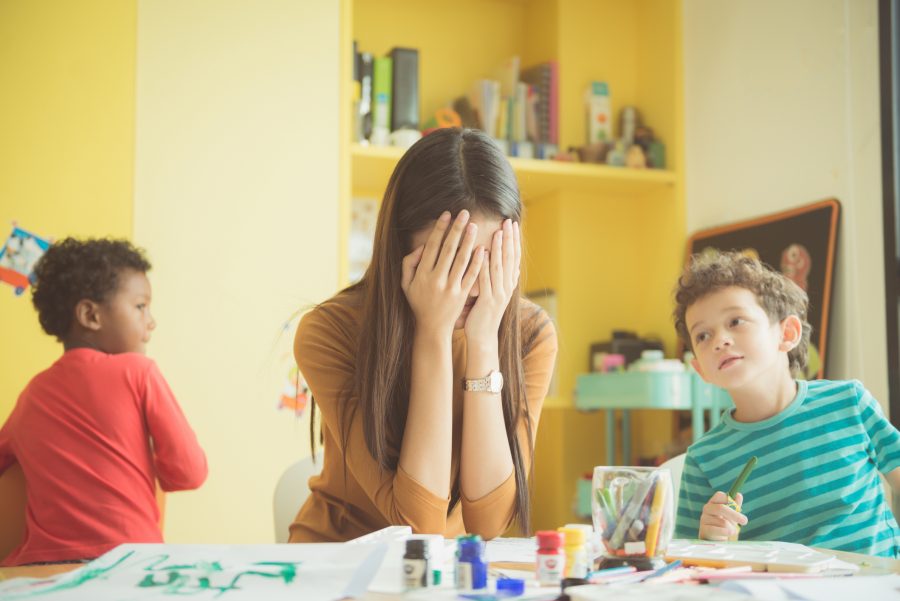 A strike would be a ‘weapon of last resort’, after consistent refusal from the government to listen to teachers. (Tirachard / Getty Images)

The British press began dishing out its ‘class war’ rhetoric only a few days into June’s rail strikes, but it wasn’t the RMT’s juggernaut action which prompted the headlines in the Sun. It was the looming possibility of a nationwide teachers’ strike.

Before his elevation to chancellor and (briefly) prime ministerial hopeful, both the National Education Union (NEU) and NASUWT warned the former education secretary Nadhim Zahawi of potential industrial action if the pay offer to teachers in light of the cost of living crisis was inadequate.

In response, Zahawi condemned any potential strikes ‘unforgivable’, and it’s unlikely that his third-replacement-in-a-week James Cleverly will respond any differently. What these Tory ministers fail to condemn is the genuinely unforgivable conditions education workers have been left in. The rising discontent among teachers isn’t just a reaction to the current cost of living crisis, although that would be reason enough. This is the result of years in the trenches.

Britain is currently undergoing massive inflation, triggering a cost of living crisis consolidated by the fact that pay, across sectors, has stagnated for years. To this rule, teachers are no exception: more and more are having to visit food banks and take up second jobs.

Back in March, teachers’ unions called for the School Teachers’ Review Body (STRB)—the body tasked with recommending teacher pay to the Department of Education (DfE)—to ensure fair national pay structure and remove performance-related pay, alongside a quick reduction in workload and an end to differential pay increases. Despite union counsel being requested by the STRB, their calls went ignored.

Instead, ministers went on to announce more real-terms cuts. While Zahawi dubiously backed new teachers’ pay rising nine percent in desperate bid to attract more into the profession, current teachers were offered a pay rise of just three percent, since raised to five. But this offer, still well below inflation, would continue a years-long process of real-terms salary decline.

In an open letter to Zahawi from the NEU, joint general secretaries Mary Bousted and Kevin Courtney outlined how average teacher pay has fallen by a fifth in real terms since 2010, ‘even before the effects of this latest bout of inflation’. Teacher earnings, they continue, are at their lowest level ‘compared to average earnings across the economy in over 40 years.’

The money teachers take home is only one part of the problem. From the collapse of extracurricular big budget projects to food shortages and stretched money for equipment, state schools are also facing a funding crisis while teacher workloads increase. In 2019, research already found that teachers were widely paying for school supplies out of pocket.

Naturally, things have grown worse in the aftermath of Covid. Teachers are struggling to cope with years of backlogged work and learning for their pupils, and the government’s catch-up scheme—which gives schools a certain amount of funding per head—is far from what it should be.

This reality isn’t enough to stop the right-wing press behemoth. Their persistent slew of ‘think of the children’-type polemics occlude the very reasonable fact that beyond liveable wages for teachers, school trips and extra-curricular activities are the first to get cut in a funding crisis. Leo (a pseudonym)—a young teacher in a London state school who has only recently entered the profession—has witnessed this first-hand.

‘Public education is becoming a cheaply put-together assembly line that pushes through kids as quickly as possible,’ he says. ‘Education should be a life-changing experience for children, not a tick-box exercise.’

Brian (another pseudonym), a teacher at a state school in London with over thirty years’ experience, tells Tribune that this sorry state of education is driving droves of newly-qualified teachers away from the profession within their first twelve months. ‘Teachers feel overwhelmed with the workload,’ he explains, adding that the burden of additional meetings and data tasks and general ad-hoc work is making things ‘intolerable’. It’s what led over half of Leo’s department to ‘take leave on grounds of mental health because of our workload,’ he says, and led many to quit thereafter.

Prospective new teachers are also being put off entering training in the first place. The NEU says Initial Teacher Training applications as of 16 May 2022 were 78,539, down from 103,040 the previous year. The real-terms pay cut on offer is not going to entice budding teachers back into the profession.

For Brian, these figures are proof that teaching as a career has changed for the worse. ‘I started teaching in 1993 and I saw it as a career where I could commit myself to public service and social justice,’ Brian says. ‘Back then there was a sense of optimism, and many of my colleagues saw teaching as a long-term career choice.’

Today, he continues, ‘decades of Tory cuts, Blair’s support for the academisation of schools, and inequality in resources and home learning environments for students’ has soured the profession to the extent that many teachers seeing nothing but negativity ahead in the career ladder. ‘We have a retention problem, which actually fuels a recruitment problem.’

Like other forms of socially reproductive labour, teaching is often classified as a ‘labour of love,’ with those who do it motivated by passion and commitment rather than the promise of remuneration. But the language of ‘love’ is too often used as an excuse to justify unpaid or low-paid work, and to disguise the real, material contribution teachers make.

‘The point is, we’re not holding people to ransom,’ Leo explains. ‘I’ve already spent hours marking papers to the point of falling asleep on them, I’ve already spent endless time planning culturally exciting trips for my low-income students, and I’ve already sat with a student in school until 7pm to make sure social services would come and collect them.’ These were all unpaid tasks, Leo clarifies, for which he can’t get the time back. ‘We just want to be paid fairly for the things we’re already doing.’

‘We are deeply committed to education—we chose a career in it, after all,’ Brian adds. ‘But we are outraged at the political choices that are systematically, chronically underfunding it.’

The ideological effects of ‘squeezing teachers and the school system’ cannot be understated, Brian explains. By constraining the learning environment, students outside of the idyllic ‘straight A-to-Russell-Group-university’ archetype are restricted in paths to success. Teachers struggle to teach a national curriculum that creates a divide, which ostracises working-class students and students of colour.

At other times, this ideological control takes a more direct form. Through bodies like Ofsted, the government flexes growing control over education, centring results for standardised testing and undermining the need for a wide-ranging educational experience and for attention to students’ particular situations. The same process, combined with a crisis of funding, has seen children with special educational needs increasingly stripped of the resources they need to learn.

All this points to a collapse in standards in the way education is governed and run, with a political class more interested in using the DfE to further their own ends than to the wellbeing of the children in the system. As Brian puts it: ‘The short-term political careerism of successive education secretaries means education policy is ill thought-out and ideologically driven, and rarely addresses the central issues: underfunding, Special Educational Needs Department provision, the long trail of underachievement, the crisis of inequality.’ Neoliberal standardisation and the logic of competition means teaching has become enveloped in the same forces that drive the capitalist workplace.

This is the consensus at the school where Brian works, and he assures me it stretches to many more in his borough. Resentment, rightly, is festering beneath the surface. ‘We need to understand the gravity of the situation,’ he explains. ‘Children’s education is suffering right now and that requires urgent action.’

Unions are acting. As the summer continues, it’s looking like an NEU ballot—the biggest in a generation, according to the union—will be likely in the autumn.

A strike, Brian continues, would be a ‘weapon of last resort’, after consistent refusal from the government to listen to teachers. But he urges others—including those whose schools may be better resourced, or those on higher pay grades—to act in solidarity with their fellow teachers to improve the state of the education system, noting that old trade union motto, ‘an injury to one is an injury to all’. In the face of the interconnected crises facing our country, the sanctity of our education system now rests on the power of solidarity.