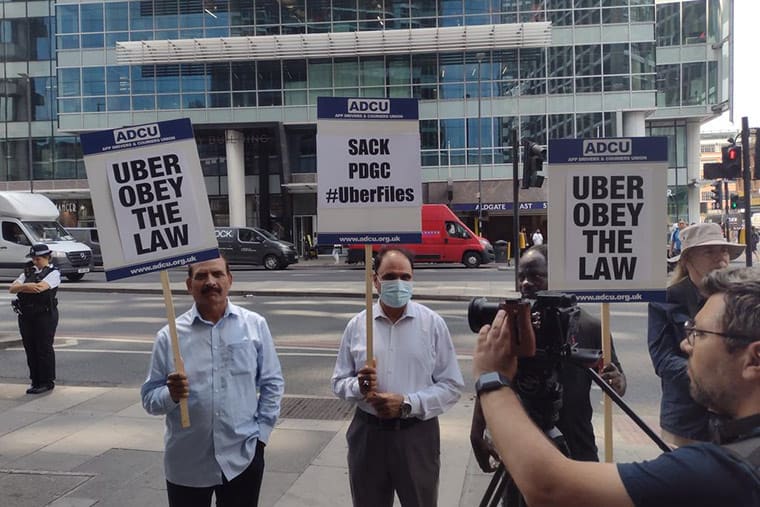 Strikers and their supporters were asked to stay off the Uber app for at least 24 hours. And the boycott had Uber shaken. Across London, Uber was forced to increase prices because of a lack of drivers.

This was a blatant attempt to try and persuade striking drivers to log onto the app. At the same time, Uber also discounted some rides for customers at specific points to persuade more people to use the service. Both methods were an attempt to break the strike.

But workers were clear that they would not be persuaded to cross the picket line. Outside Aldgate Tower, workers chanted, “Uber, obey the law,” and, “Uber, Uber, you can’t hide. We can see your greedy side.”

Yaseen Aslam, president of the ADCU, said, “We want £2.50 a mile and 15 percent commission. We want Uber to obey the Supreme Court ruling.

“At the moment they are not currently paying us for working time, so we are requesting we are paid for full working time as per the supreme court ruling. We need to end unfair dismissal as well.”

The strike came after thousands of documents that revealed evidence of Uber’s corruption and lobbying of powerful politicians were leaked.

The ADCU union explained how politicians in Britain are being bought by Uber. It wrote on its Twitter, “Uber doesn’t just break the law. They suppress law-making. They’ve captured government and also front bench opposition by hiring loads of Labour and Tory operatives.

“That is why we don’t have an employment bill to check the gig economy despite promises since 2015.”

And workers were clear to draw links between the corruption that flows from the top of Uber and the exploitation they face.

At the protest, they called for the dismissal of Uber executive board member Pierre-Dimitri Gore-Coty. More strikes are needed to break Uber bosses and win workers a fair deal.