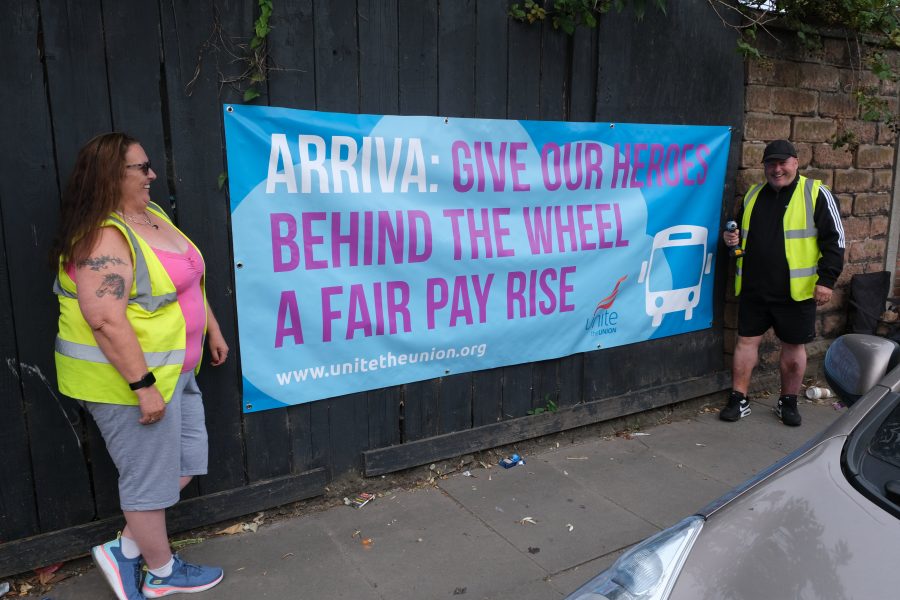 As Britain’s strike wave intensifies, 1,800 Arriva North West bus drivers have called a continuous strike – the latest group of workers to take to the picket lines in the fight for a real pay rise.

Philip* has just had to move his son to a new nursery. It’s £185 a week. It’s far from the only price that is weighing on him as we chat. Food, gas, rent—with RPI inflation hitting 11.7 percent and expected to go higher before the year is out, every basic has become a struggle. The single parent says he already has to have his wages as a bus driver in Merseyside topped up by Universal Credit to keep him and his son fed and warm, and it’s still a battle to make ends meet.

‘The cost of living at the moment is just horrendous, and it’s for everything,’ he tells Tribune. ‘It’s not like it’s just a small increase in the cost of a pack of Lurpak—some of us weren’t able to buy Lurpak before anyway.’

Often regional industrial disputes get lost in the never-ending national news agenda, but for the 1,800 or so bus drivers working for Arriva in the North West, this strike couldn’t be more important. It’s the difference between paying bills and affording the grocery shop or falling into arrears and going hungry.

‘This is all down to people’s pay. There’s a guy who’s ended up defaulting on his mortgage because of it, others having to use foodbanks because of it,’ says Robbie Marnell, a GMB organiser for the region. ‘The pay offers have been seen by members as a bit of an insult really. They’ve battled through Covid as key workers more exposed to the disease than everyone else.’

For years before the dispute, drivers say Arriva offered flat three percent increases each year. This year, however, when inflation was hitting at a record high, the company told Unite and GMB (the trade unions that represent local drivers) that they could only afford around two percent.

Since then, there have been offers of three percent, or six percent with cuts to sick pay and the loss of enhanced Saturday pay, and most recently, as strike action loomed, just over eight percent—all of which still amount to a real-terms cut for drivers, with inflation hitting decades-long highs. Union reps say wages vary heavily based on depots, but drivers in the region usually earn in the £20,000s, well below the UK median annual salary of £31,000.

‘The negotiations have been going on since February, but the real issue is that it’s been years of low pay, and that has created a real problem now with the cost of living crisis,’ explains Dave Roberts, the Unite regional officer for the North West. ‘These corporate operations that have made profits for years and have never really put that money into the workforce, and now we’re looking for that support they’re turning their nose up at us.’

One sign of how hard things have become is that when consulted on industrial action, ninety-six percent of Unite members voted yes on a seventy-two percent turnout. The aim of the continuous strike, Unite and GMB say, is to end up with an offer that matches the RPI inflation rate.

Arriva, which also runs countless other bus and train franchises across the UK, is owned by Deutsche Bahn, Germany’s nationalised railway company. The irony isn’t lost on anyone involved that as these drivers are fighting real-terms pay cuts and mass cutbacks to British bus services while the German government institutes €9-a-month countrywide travel passes to help ease the domestic impact of the cost of living crisis.

In a statement, Arriva said they were ‘disappointed’ they couldn’t reach an agreement over its most recent offer of an 8.5 percent wage rise with trade unions, which it said was ‘far higher than most workers are receiving from their employers at a time of considerable economic pressure’.

Generally, the company’s line in negotiations according to GMB and Unite reps was that Covid had meant they didn’t have the money to pay drivers more. According to its most recent Companies House filings from 2020, Arriva’s UK bus arm saw a huge drop in revenue during Covid. But the company has also received millions from the government to help deal with the impact of the pandemic, after around £2 billion was made available to over 160 operators.

Those Tribune spoke to also cited the fact that the company had been in profit for years before the one-off impact of the pandemic, with analysis of Companies House suggesting Arriva’s bus arm alone netted nearly £31 million before tax in 2019—and that its indirect ownership by the German government means that cash flow issues are likely to be much less of a problem while overcoming the short-term cost of Covid.

A lot of this is far from new for any industrial dispute—workers wanting decent pay, companies saying they can’t afford it. When drivers struck back in 2017, Philip says that even parts of the public would say they didn’t deserve a pay rise because there were other workers earning even less than them each week.

‘People say some workers are on less, but that’s not good either,’ Philip explains. ‘It’s the idea that you’re not poor enough. You’re okay just because you’re getting three tins from the food bank instead of seven.’

But amid the hot strike summer, public attitudes towards industrial action are shifting—and what sets this dispute apart, according to those taking part, is hope.

Recent strikes among Arriva bus drivers in neighbouring Yorkshire have led to major progress in pay talks, while Liverpool’s Stagecoach bus workers have seen wage rises of over eleven percent recently agreed after threatening strike action. Nationally, the fact that everyone from railway workers to BT and Royal Mail staff have voted to strike has caused what Philip describes as a ‘domino effect’, making Arriva workers believe they can win this struggle.