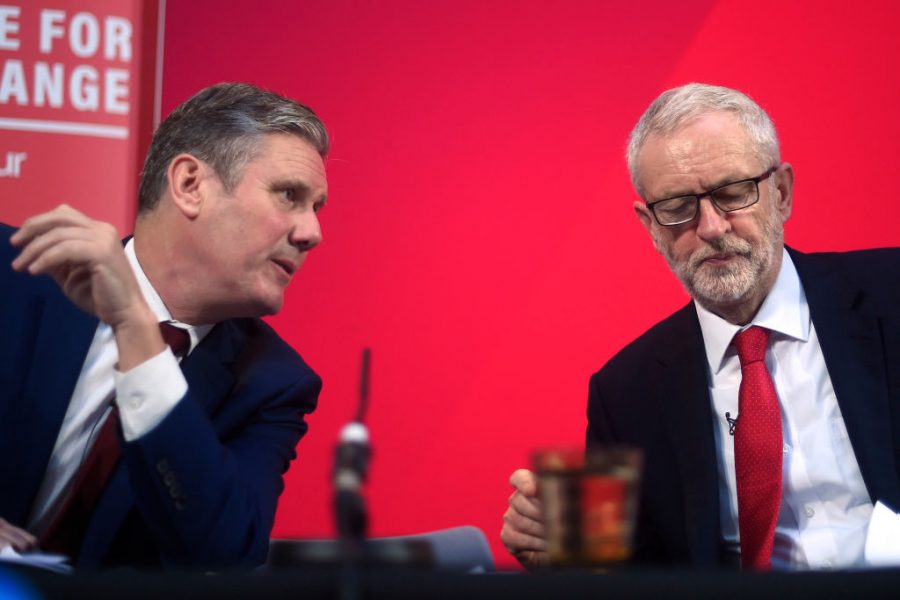 Far from drawing a line under party factionalism, the Starmer leadership has elevated the very Labour Right fixers whose conduct is most criticised in the Forde Report – and given them licence to remake the party in their image.

With a media obsessing over the Conservative Party leadership contest and the damage it has inflicted on the government, there was no better time to release the Forde Report. Commissioned in May 2020 to investigate the contents of and the circumstances surrounding the release of the so-called ‘Leaked Report’, itself an inquiry into antisemitism and factionalism in the Labour Party, for two years the document has been a rumour more than anything else. Deadlines came and went, updates that appeared on the NEC’s agenda mysteriously slipped off it, and then finally on Tuesday early afternoon it appeared in full.

Was it what many on the left hoped it to be? Did it contain moments of reckoning for those who had operated against Jeremy Corbyn, his staff, and the party membership between 2015 and 2019? Or did it turn out to be a damp squib or, worse, a whitewash?

There is much in Martin Forde’s report that is useful. On the vindicating the left, the report recognised what many members had long argued—and have been chucked out of the party for—that antisemitism was used as a factional battering ram. As the report put it, ‘Some anti-Corbyn elements seized on antisemitism as a way to attack Jeremy Corbyn’. The report also accepts Labour had (and implicitly, still operates) a hierarchy of racism driven more by factional interests than stamping out prejudice, highlighting the institutional racism black and Muslim members of staff endured.

Forde is also unequivocal that evidence points to the old Compliance Unit screening and keeping out member applications from people who were likely to support Corbyn in the 2015 and especially the 2016 leadership elections. We read testimony of staff responsible for sorting through the backlog of complaints being taken off this work to reinforce a witch-hunt against ‘Trots’, coincidentally giving the impression the party was not taking antisemitism seriously. And the Governance and Legal Unit (formerly Compliance) would routinely seek involvement from the Leader’s Office in decisions about complaints, contrary to the cultivated impression given that it was dabbling in and intervening to protect favoured members.

The Ergon House affair, the syphoning-off of party funds by Labour HQ staff with the connivance of senior figures to support a covert operation supporting key anti-Corbyn MPs is examined in some detail and roundly condemned. But most damning of all for the Labour right and all those who strived to rubbish the original leaked report, Forde writes:

It has been put to us by a number of witnesses that the extracts of the messages quoted in the leaked report were cherrypicked and selectively edited, such that the quotes that appear in the Leaked Report are both unrepresentative and misleading. Having reviewed the transcripts and considered evidence from many of those involved we do not agree. We find that the messages on the SMT WhatsApp reveal deplorably factional, insensitive and at times discriminatory attitudes expressed by many of the party’s most senior staff.

At 138 pages, the Forde Report is a long, depressing, but ultimately necessary read to understand what happened in the party during the Corbyn years. But whereas Forde’s proposals for addressing the dysfunctions his work identifies are worthwhile and, in some cases, point toward values we should try and practice in the labour movement, they are ultimately treated as technical fixes.

This is because of the report’s chief weakness: it eschews political analysis. While the tone is mostly dry and factual as befits as document of this sort, it does lapse into exasperation. If there is an animating spirit, it’s a conciliatory wistfulness, a paean to ‘why can’t we all get along?’. Rather than locating Labour as a political entity that is simultaneously a vehicle for and a site of social struggles, and always has been, instead the factional antipathy that greeted the influx of hundreds of thousands of new members and the election of Jeremy Corbyn was a historical happenstance. Of course, we could not expect Forde to produce a critical material analysis, but that does not mean we should avoid one ourselves.

For example, Forde argues that the party’s permanent staff, which he admits have never been apolitical, became expressly factionalised during the Tony Blair years and loyal to the New Labour project. This meant after his and Gordon Brown’s departure, a monoculture reigned in which the apparat recruited the like-minded. This ensured the party remained to the right of the members. Therefore, the Corbyn insurgency was greeted with antipathy by most of the permanent staff, reflecting the hostility Corbyn faced in the parliamentary party. Here Forde criticises Corbyn for refusing to reach a ‘policy accommodation with the Centre’.

As anyone familiar with these years would tell you, this is not true. Yet the report implies Corbyn’s inflexibility brought the subsequent difficulties upon himself. As a result of this, the Leader of the Opposition expanded his office to an unprecedented degree with HQ roles duplicated by LOTO to get around the obstructions. The result was a breakdown in coordination and trust, the embedding of factionalism, and an utterly chaotic approach to everything the party organisation did—despite the efforts of some to bridge the divide.

This legacy explanation does not wash. Forde argues that the anti-Corbyn faction were motivated by a genuine belief that Corbyn meant doom for Labour’s electoral prospects and, subjectively, believed they were doing the right thing. Indeed, so convinced were right wing staff that, along with their allies in the parliamentary party, they stretched every sinew to make sure the left-wing leadership crashed and burned. There is little sense HQ resistors were opposed because not only did they disagree with the politics of the Corbyn movement, but because its project for transforming Labour from the bureaucratically-run B-Team of British capitalism into an electorally viable party rooted in working-class communities meant obsolescence for them and their careers. In other words, very similar motivations to Corbyn’s most vociferous opponents in the Commons.

Because Forde evacuates the material, this allows him to play the equivalence game. Both sides were motivated by the best of intentions, but communication was episodic to impossible, and therefore both are responsible for the tragedy that unfolded. While he mentions the ideal of party staff effectively being the equivalent to the civil service (and indeed, the report’s recommendations suggest a recruitment strategy that does not fish from the pool of existing Labour activists), he does not consider their proper function. Since 2013, the membership has been sovereign in the party—they determine who the leader is, and have every right to expect the party to accommodate their wishes. Instead, the antagonism between LOTO and HQ was precisely because staff at all levels of the party were contemptuous of democracy and actively worked to subvert it. Because this is ignored, the Forde Report offers a distorted picture of what happened.

The report does make some criticisms the left should reflect on. Forde is right LOTO itself was a chaotic operation for a good chunk of Corbyn’s tenure, and ultimately the former leader himself is responsible for this. It is also unfortunate that he apparently did not accept Forde’s request for an interview. The report is right that the denialism surrounding antisemitism was and remains a characteristic of some of the left. A constructively self-critical left is still something we have to build inside and outside of the Labour Party.

But despite the political problems and distortions of the report, Forde provides a means to pressurise the present leadership. Under Keir Starmer, Labour has not become less factional: it’s just that the right’s writ reigns supreme, as is to be expected following a successful counterrevolution. With Sam Tarry’s trigger ballot, we’ve seen abuse of process, and his complaints about it fall on deaf ears. Likewise, the leadership are uninterested in the misogynistic harrying of Apsana Begum. The rule book, along with elementary compassion and safeguarding, are trumped by factional politics.

Everywhere, from parliamentary by-elections to seat selections, who is allowed to enter the running is determined behind closed doors. Socialists and left-wingers are out, compliant knowns and unknowns are in. The material is here to aid the criticism of ‘Starmerism’ and the manoeuvres of the right. Unfortunately, it seems unlikely the (naïve) spirit of the Forde report will pass muster at the NEC any time soon, and the toxic organisation the report describes will be allowed to continue without change.