Home / News / The Pentonville Five at 50 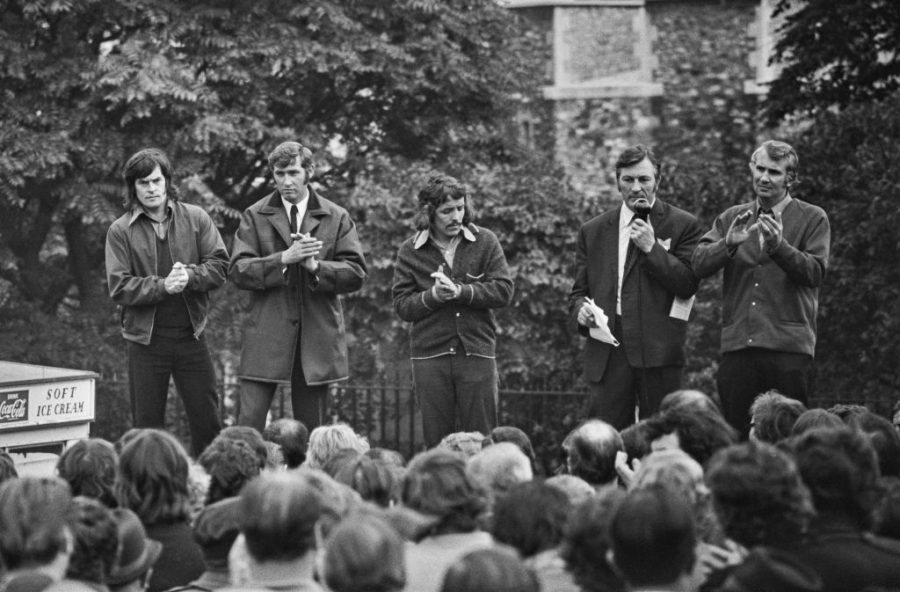 On this day in 1972, five trade unionists were arrested after refusing to obey an injunction against picketing. We republish a report from Tribune on the campaign which secured their freedom.

On 21 July 1972, five docker shop stewards—Derek Watkins, Tony Merrick, Conny Clancy, Bernie Steer, and Vic Turner—were arrested. They had refused to accept an injunction by the National Industrial Relations Court (NIRC) against their picketing of the premises of the Midland Cold Storage Company in Hackney, as part of a campaign to protect dockers’ jobs from the threat posed by the containerisation of transported goods.

The NIRC was a product of the Industrial Relations Act, an assault on trade union power passed the previous year by the Tory government, which also included powers to sequestrate union assets and prevent mass picketing and secondary action. The five were placed in Pentonville Prison in North London, and a wave of strike action began in solidarity, on the docks and among printers, miners, transport workers, and others, with demonstrations outside the prison gates taking place daily. The Trades Union Congress called for a general strike to begin on 31 July.

On 26 July the five were released, following this wave of popular action and an appeal by the Official Solicitor leading the courts to re-interpret the Act. Two days later, the dock strikes became official; two years later, the Tory government was defeated and the new Labour administration repealed the Industrial Relations Act.

The following is taken from the 28 July edition of Tribune, following a march that took place from Tower Hill to Pentonville in support of the dockers on 25 July, and featuring statements from Tony Benn, Barbara Castle, and Eric Heffer. Amid a new wave of industrial action this year, and a new effort by the government to undermine the power of trade unions, their words have enduring relevance.

‘The imprisonment of five dockers was a political act deliberately brought about to intimidate working men and women. Our crime was to fight for full employment. We are inspired and strengthened by the actions of workers and shut-down of Smithfield, Covent Garden, etc.

Workers are united in the growing cause not merely to defend five dockers but also the rights and freedom of the trade union movement. This is no time for compromise or to discuss reports. It is time for the TUC and TUC leaders to carry out Congress decisions to defend trade unionists. We don’t need sympathy but determination to free us from prison and so end this unjust law. Use the strength of the movement to free the dockers.’

Dockers and other workers marched through London on Tuesday to Pentonville Prison to demand the release of the five imprisoned dockers. Headed by the London Docks Stop Stewards Committee banner, with its slogan ‘Arise ye workers’, which has featured at the picketing at Chobham Farm and Midland Cold Storage, the demonstration set off from Tower Hill to make the three-mile journey to Islington. The original target of the march had been the House of Commons, but the organisers decided in the end that the prison was a more relevant target.

Among the 15,000 or so demonstrators was a strong contingent of printing workers from Fleet Street, building workers, engineering workers, council workers and porters from the London food markets.

From left to right, Vic Turner, Bernie Steer and Anthony Merrick, three of the Pentonville Five, are carried out in triumph after their release from Pentonville Prison in London, 26 July 1972. (Central Press / Hulton Archive / Getty Images)

Marchers were supplied with posters and banners by the workers at Briant Colour Printing, who are having a ‘work-in’ and are now working full-time on printing for the dockers free of charge. ‘This is all down to the liquidator and the company,’ said their leader Bill Freeman.

A round-the-clock picket has been mounted by dockers and sympathisers outside the prison since the five men were arrested on Friday, and the Briant workers are also helping here by supplying tea and soup.

In a statement issued on the eve of the annual Tolpuddle rally, chairman of the Labour Party Anthony Wedgwood Benn said:

‘Millions of people in Britain, whatever they may think of the rights or wrongs of the dockers’ action, will in their hearts respect men who would rather go to gaol than betray what they believe to be their duty to their fellow-workers and the principles which they hold.

For centuries Britain’s democratic liberties have been won and upheld with the help of men and women who stood up for their beliefs and took the consequences. The right to worship freely, to organise trade unions, to vote—for men and women—in Britain were all won against powerful people who sought to maintain their privileges by stirring public fears about anarchy whenever anyone challenged those privileges. That is what the Government are trying to do.

The British people are the most law abiding people in the world, it would be quite wrong for anyone to tell others to break the law. But we cannot forget that, in the end, each man is answerable to his own conviction as to what is right and wrong. If a man’s conscience lands him in goal, the bars that keep him there also imprison a part of all our freedoms.

The law which has put these men (the dockers) in prison is an evil law, drawn up by a Government which hates the trade unions; and is being enforced by lawyers who have no experience of the problems of working people and their families.

The British people must, before disaster overtakes us, be given a chance, in a general election, to decide how they want these problems to be handled. Do they want them dealt with by a judge and tipstaff and prison officers? Or by repealing the Act and seeking the way of reconciliation based on fair play and concern and a respect for our traditional human values?

It is these values and not the statute book, which are the real bedrock of consent on which all our democratic institutions ultimately rest. It is these human values that we must all now rally to defend.’

‘The imprisonment of the five dockers should arise the united anger of the whole Labour movement. At last the country will be able to see where this Government’s stupid and divisive policies are leading us.

This is no time to be mealy-mouthed. This is no time for Edward Heath’s hypocrisy. It is no solution just to say that we must all obey the law. Law-making should be an expression of the democratic principle. But our history is littered with anti-democratic laws: laws designed to cripple the growth of free representative institutions like trade unionism which are just as important to the freedom of working men and women as any Parliament.

Where would trade unionism have been today if workers had tamely accepted the Combination Act: that piece of tyranny which for a quarter of a century kept workmen in miserable subjection by making it illegal for them to combine to secure an increase in wages or a decrease in hours?

The government’s antagonism to trade unionism takes different forms, but it is just as deep. It makes no secret of its intention to use the Industrial Relations Act to curb what it calls the “monopoly power” of trade unions, while leaving unchecked the real monopolies: the multi-national companies, the financial institutions and the property speculators.

Sir Alec Douglas-Home has the impertinence to blame all our troubles on those “greedy” workers, even those who have not yet won a minimum of £20 a week, yet his government has poured out tax “incentives” on those who would think nothing of spending £20 on a single meal.

Of course we want an orderly society, but you cannot build order on the blatant injustices of the Industrial Relations Act. What are we to think of an Act that, at the most delicate stage of the negotiations to solve the complex problem of dock work on which the Jones-Aldington report is expected in a matter of hours, allows a private employer to pursue his private vendetta against the dockers until the National Industrial Relations Court is forced to send them to prison to save its own face?

Don’t let anyone fool you that the Labour Government ever proposed anything so nonsensical or iniquitous. Don’t let us take any lectures from Mr Heath who has not the moral courage to call for a prices and incomes policy based on the creation of a more just society, but has brought in a purely incomes policy on a side-wind.

If we want to fight the evils of inflation, as we all do, we must send this Government packing to its grave and mobilise the sense of human fellowship which has been the inspiration of workers’ movements throughout the centuries.’

‘The arrest of the dockers, arising out of the operation of the Industrial Relations Act, has led to a serious crisis in industry. We now have a national dock strike inevitably followed by industrial action throughout industry.

The full responsibility for this situation rests with the Government for introducing such a stupid piece of class legislation. This is not normal law, but law of a special kind. The Opposition warned of what could happen if workers were arrested under the Act. It is my view that the whole Labour movement will be in great sympathy with the men involved.

The statement by Sir Peter Rawlinson, the Attorney-General, that the Industrial Relations Act is not responsible for the arrest of the dockers, is so much eye-wash. The use of the Act by certain employers has led to this situation. The only real solution is for the Act to be repealed immediately. The five men who are in Pentonville today are there only because the Act is in existence. The Government, because of the Act, is in difficulty. It cannot override the court, the monster which they themselves created. Therefore, immediate repeal of the Act is an absolute necessity.

The dockers and other workers are showing their solidarity by taking strike action. The spirit at the Tower Hill meeting on Tuesday morning was one of determination to get the dockers released and the Act repealed. These men must receive the support of the entire labour and trade union movement and despite one or two fainthearts who fail to understand working-class solidarity they have got it, especially from the Labour MPs in the House of Commons. The men must be released forthwith: that is surely a condition for any talks on solving the real industrial relations issues involved.’

With thanks to Owen Dowling for transcription.