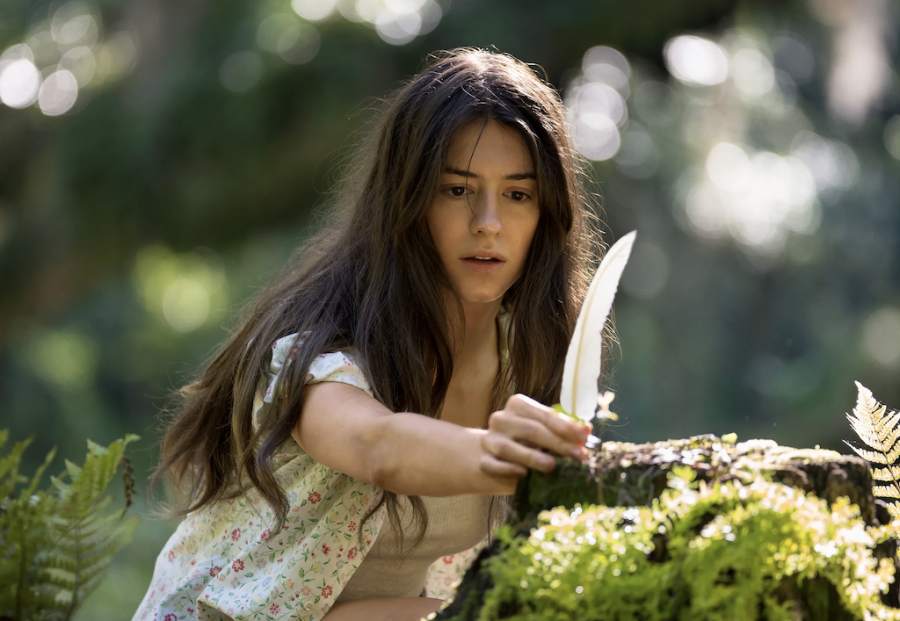 Reese Witherspoon’s book club made the 2018 novel Where the Crawdads Sing a hit. The new film adaptation, just like the book it’s based on, is pure bathos of the mushiest kind.

Still from Where the Crawdads Sing. (Columbia Pictures)

I was at a screening of Where the Crawdads Sing, where I saw eight middle-aged women file in together buzzing with anticipation. The person I was with, who knows about such things, said automatically, “book club.”

And it seems that’s the intended audience for this film, with the rarely appealed to “older woman” audience — which makes up the majority of the book club population — boosting the box office stats to healthier numbers than anyone would figure who’s read the annihilating reviews.

The best-selling novel was promoted by Reese Witherspoon’s own influential book club, before she got the rights and produced the movie. So you can imagine book clubs all over the country, first avidly reading the 2018 Della Owens novel of the same name, then hurrying off to watch the faithful film adaptation. And then, judging by the comments I overheard as we crossed the lobby to the exits, exclaiming to anyone within hearing range, “I loved it — it was beautiful — I cried at the end!” My reaction was somewhat different.

Didn’t love it, didn’t think it was beautiful, didn’t cry at the end. And the end seemed a long time coming. It’s such a slow, predictable movie, you can tell what’s going to happen far ahead of each bend of the narrative, including the supposedly shocking final revelation which is anything but.

As for beauty, there’s some very pretty imagery representing North Carolina marsh country (actually shot in the Louisiana bayous). They used to call these kinds of images “postcard perfect,” meaning attractive scenic views, though of no particular character or expressivity. Just pretty, which is perfect for the movie’s overall aesthetic. You’d think a movie about an obsessed, self-taught naturalist living in almost total isolation since childhood would adopt some sort of distinctive point of view to match her experience, involving lenses and angles and light and shadow — you know, partaking of that wide range of film techniques available to a talented director. But this ain’t that kind of movie.

Where the Crawdads Sing is a lugubrious mystery-melodrama set in the 1950s and ’60s, about a girl named Kya (Daisy Edgar-Jones of Normal People and Under the Banner of Heaven) who’s abused and abandoned by her family, and learns to survive alone in the North Carolina marshes. Known as the “Marsh Girl” and almost entirely shunned by the locals, she’s a budding genius amateur naturalist until her relationships with two young men in the nearby town take a dark turn when one of them assaults her and is later found murdered. She becomes the prime suspect as the scapegoat of the community, and recalls her tumultuous life while imprisoned and on trial.

As produced by Witherspoon and directed by Olivia Newman (First Match), this is one of those wearying pop-feminist movies that are such naked, unartful fantasies, you cringe throughout. Kya is victimized by everyone, beginning with her father, who’s one of those melodramatic drunken beasts you’d see in very early silent films, during the Temperance movement era. Played by Garret Dillahunt (Raising Hope, Winter’s Bone, No Country for Old Men), an excellent actor who deserves a lot better parts than this one, his entire role consists of staggering into domestic scenes and demonstrating the dangers of “Demon Rum” by attacking his wife and children. One by one, they all run away, leaving small Kya behind as the last holdout.

Her father gets one slightly sympathetic half-minute scene in which he gives Kya his old knapsack to carry her Marsh Girl naturalist treasures around in, and Kya says “thanks” and trots off while he’s still muttering “I got it in the army. . .” It’s a limp gesture toward giving him a backstory of some kind that’s soon forgotten. He goes back to straight monstrousness, and then inexplicably runs off too — for no apparent reason other than the necessity that everyone must leave Kya, for some reason or no reason. It has to happen, otherwise, how can Kya become the lonely martyr of the community, and an internationally famous naturalist, better than everyone else around there, yet still a reviled outcast?

And mind you, you can do wonderful things with a character like that. There are plenty of great novels about the abused and neglected girl or young woman whose superb qualities are a rebuke to her entire society. Quite realistic narratives, actually. Charlotte Brontë wrote two masterpieces about that: Jane Eyre and Villette.

But you’ve got to do something more than tack together a weak, thin, excruciatingly sentimental little plot like Crawdads, in which cardboard characters pop up to sneer at or rough up or cruelly mislead Kya, or equally cardboard characters — far fewer in number — have a sudden realization that she’s almost divinely special, and thereafter devote their lives to her. There’s a kindly black couple running the general store in town, named Jumpin (Sterling Macer Jr) and Mabel (Michael Hyatt), who seem to have no other life than fretting over and caring for poor little Kya. We even see Jumpin’s funeral decades later, when Mabel hugs Kya and offers only one comment on her husband’s life, testifying, “He loved you so much.”

If you’ve seen a certain number of movies over the decades, you can’t believe they’re still pulling this one. That is, having the main white character’s goodness and suffering valorized by minor, ultra-virtuous, self-abnegating black characters who are made to represent the most authentic kind of American goodness and suffering. That Bible-quoting scene between Jumpin and Mabel? Lordy!

At least these are mostly gifted actors trying to make this dull diorama come to life. For example, David Strathairn is always terrific, even when playing a cliched white-suited Southern lawyer radiating old-fashioned decency and clearly modeled on Atticus Finch in To Kill a Mockingbird. He’s also kindly to Kya when she’s a muddy, abandoned child wandering the streets, and then devoted to her when he’s craftily representing her at her murder trial. Does this lawyer have a family, or friends, or hobbies, or interesting eccentricities, or a congenital limp, or anything? No, he’s just there to cornpone it up in the courtroom and dedicate himself to Kya.

As for the two young men — one good, one evil, it goes without saying — they’re both obsessed with Kya. I could hardly tell them apart, visually, and it doesn’t help that one is named Tate and one is named Chase. I vaguely recall the good one is blonder and the evil one has a sneerier face. They take up an exhausting amount of screen time, because Kya’s love life is of the foremost importance in the narrative, with tons of shy flirting, kissing in soft-focus close-up, first-time sex scenes, and so on.

Since the movie opened, there’s been a startling, late-breaking news story that’s ratcheted up further interest in it, concerning novelist Delia Owens, herself a wildlife scientist:

With the film’s release, news has resurfaced that 73-year-old Owens is still wanted for questioning by Zambian authorities as a possible witness, co-conspirator, and accessory to federal crimes. At the time [of the crime, in the mid-1990s], she and her then-husband Mark were living in Zambia as animal conservationists, trying to save elephants from poachers. . . . In fact, an ABC news crew documenting the Owens’s work in 1995 actually captured the execution of a suspected poacher.

Captured gunshots, that is — it’s unclear who pulled the trigger. Owens denies any wrongdoing, and so far no one has been charged with a federal crime. But unlikely figures such as Taylor Swift, who wrote and sang the tepid theme song for Crawdads, “has faced social media backlash for her involvement in the film.”

The media scandal has added a certain frisson to Kya’s lines in Where the Crawdads Sing, such as “The marsh knows all about death, and doesn’t necessarily define it as a tragedy, certainly not a sin.” And, “I don’t know if there is a dark side to nature. Just inventive ways to endure, against all odds.” And, “Sometimes, for prey to live, its predator must die.” And, “Way out yonder, where the crawdads sing, the marsh knows one thing above all else. Every creature does what it must to survive.”

There could be interesting and rigorous arguments about the ethics of defending elephants against poachers by any means necessary. But they’re not likely to arise out of the Delia Owens controversy. Or by her way of representing murder and its potential justifiability or repercussions in Where the Crawdads Sing, which is pure bathos of the mushiest kind.