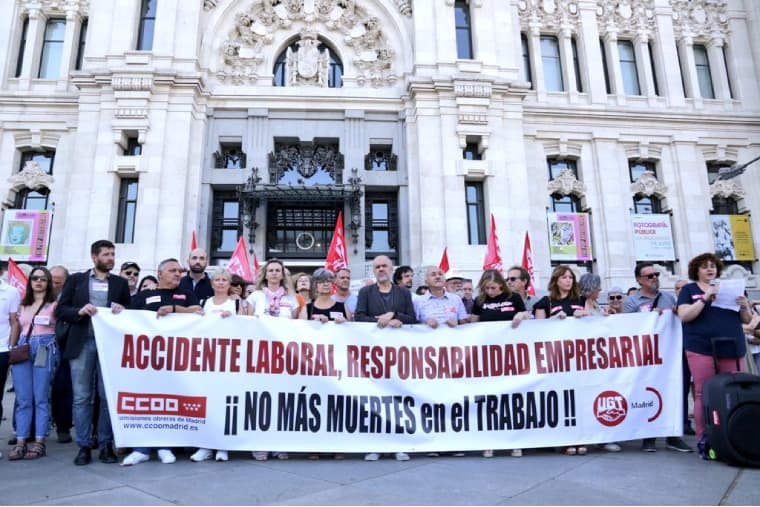 Refuse worker Jose Antonio Gonzalez died of heat stroke after being forced to endure suffocating 42 degree heat on the streets of Madrid in Spain. Precarious work meant that Jose was worried about whether he would keep his job. His son said, “I am ­convinced that he did not stop ­cleaning that street until he fainted.

“He thought his contract was not going to be renewed and he was giving his all to prove himself,” he said.

Jose’s death is just one ­example of the thousands of people that died due to heatwaves and wildfires across Europe last week. Over 850 people died between 10 July and 18 July in Spain. Portugal’s health authority reported that there had been 1,000 excess deaths between 7 July to 18 July.

As a heatwave tore through Europe, so did wildfires. There were blazes in Spain, Portugal, Italy, Greece and Britain. Wildfires across France last week forced over 24,000 people to flee their homes to escape the flames and the pollution.  Residents reacted with horror to the unprecedented blazes. “This is a disaster” said a resident of La ­Teste-de-Buch in south west France. “We never thought the fires would reach us.”

Frequent wildfires aren’t just a fact of nature. They are a product of a rapidly heating world. While wildfires start in several ways, from a person dropping a cigarette to lightning strikes to arson, every wildfire is made more deadly by climate change.

But countries are ill-equipped to deal with both heatwaves and forest fires. In both Spain and France, ­emergency services have reported being understaffed and not having the equipment they need to do their job.

At the height of the blaze, Christophe Govillot, spokesman for the National Union of Aircrew of Civil Aeronautics, announced that they didn’t have enough planes. He added that of the available planes, only a third were usable due to needing maintenance operations. “Repairs that should take two to three hours take five to six hours and are not very successful, with planes that break down several days in a row” Govillot said.

He also pointed out that there were not enough pilots and that the private service provider responsible for maintenance, Sabena Technics, was not, “up to the task.”

The experience of firefighters in France is just one example of a system that is simply unprepared to deal with more frequent extreme weather events. Ordinary people across Europe should make a number of demands, in light of these horrific blazes. Emergency services must be fully funded, and workers paid what they deserve.

Half the work in fighting forest fires must be about doing preventative work, such as clearing ­forests and creating forest walls so fires don’t spread as easily.

A massive shift is also needed to retrofit homes and infrastructure so they can withstand the heat. All of this is not impossible, but it will take a massive movement on the streets and in the workplaces to put enough pressure on governments to get there.

The unabated use of fossil fuels comes at the cost of more forest fires, heatwaves, death and destruction.

After meeting with firefighters at a field command post in La Teste-de-Buch, president Emmanuel Macron  warned that we are, “experiencing the full consequences of climate change.”

Yet a report conducted last year found that banks BNP Paribas, Credit Agricole, Societe Generale and Banque Populaire Caisse d’Epargne generated a carbon footprint bigger than all of the French territories combined. And any phasing out of fossil fuels comes with one significant condition in France. That oil, gas and coal production is replaced with nuclear power.

But the very source of energy that the French state relies on for its power can become unusable and dangerous in extreme heat. The water from rivers such as the Rhone and the Garonne are used as coolants for nuclear reactors. But these rivers have been too hot in the last few weeks to cool down reactors, forcing them to be shut off.

As for Spain, promises to end fossil fuel come too little too late. Along with Portugal, Spain has rejected even a very weak initiative proposed by the European Union to reduce natural gas use by 15 percent. Italy and Germany have called for G7 countries to reconsider a ban on financing overseas fossil-fuel projects.

Not only are states failing to adapt to changing temperatures, but they are also avoiding addressing the root cause of the problem—the fossil fuel industry.

Kit Malthouse, the Cabinet Office minister, said last week that Britain “must learn to live with extreme events” such as recent record temperatures. But Britain’s infrastructure is entirely unable to cope with the heat levels seen last week.

For Kevin being inside his home became “unbearable” on Monday and Tuesday of last week. He told Socialist Worker that temperatures inside his home in Norwich, which was built in the 1950s, were potentially damaging to his health.

Many homes in Britain are poorly insulated ice boxes in winter and heat trraps in summer. The typical British house is small and cramped with low ceilings to squeeze as many people into a small space. Flats were once designed to have windows on both sides so that air could flow freely. However, due to cost-cutting, this is now rare.

Today most windows in new build flats and homes don’t even open all the way.

Transport can’t cope with this

Tory transport secretary Grant Shapps said it would take decades to make the railway system resistant to extreme heat. But we don’t have decades.

The steel tracks that make up Britain’s rail network expand and contract as temperature changes. Extreme temperatures add pressure to the tracks, which can result in them warping and buckling. As temperatures soared past 40 degrees, train tracks expanded nationally by as much as 9 kilometres last week. In hotter countries, concrete slabs are installed underneath the tracks to keep them in place.

But the pursuit of profit has meant that Network Rail bosses say they are in no rush to make the changes.