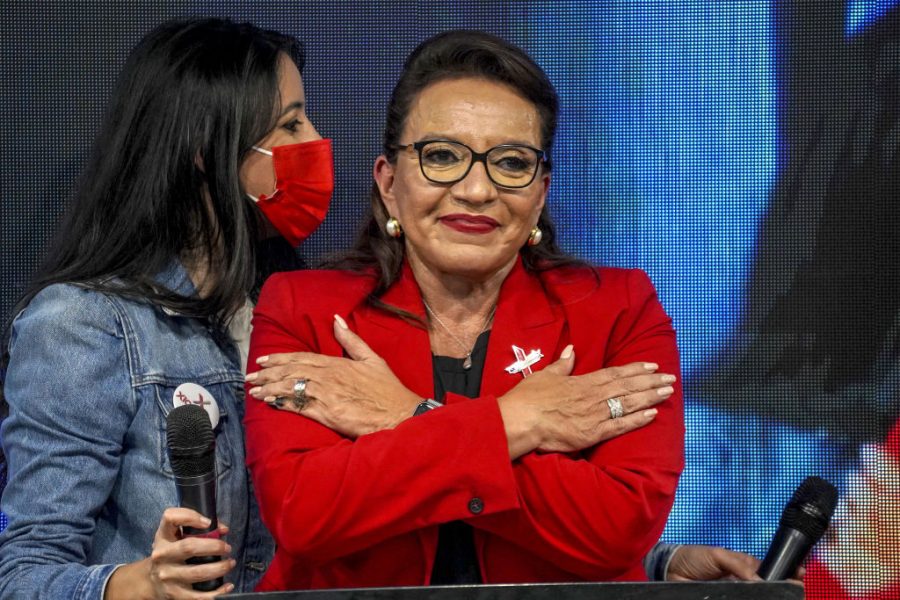 President of Honduras Xiomara Castro during a press conference on November 28, 2021 in Tegucigalpa. (Aphotografia / Getty Images)

In January 2022, Xiomara Castro became Honduras’s first woman president, restoring electoral democracy to the country after more than a decade of dictatorship. Running with the leftist Liberty and Refoundation (LIBRE) party, Castro’s election breaks with the century-old two-party system that traded power between elites in the establishment National and Liberal Parties. With a mandate for transformation and high popular expectations, Castro faces significant challenges in a context of profound systemic crisis.

The 2009 military coup that ousted Castro’s husband, democratically elected president Manuel Zelaya of the Liberal Party, plunged Honduras into chaos. The ensuing far-right regime was sustained by military force and brazen electoral fraud. The original “Banana Republic” became a laboratory for radical new modes of appropriation and enclosure, with public services and resource-rich territories auctioned off to the highest bidder. Social movement leaders met escalating repression, including the high-profile execution of renowned indigenous activist Berta Cáceres in 2016. The private interests of public officials, extractive capital, and narcotraffickers became indistinguishable. In the face of mounting displacement, insecurity, and inequality, impoverished Hondurans fled to the United States in unprecedented numbers.

LIBRE was formed in 2011 out of the National Popular Resistance Front, which was forged in the anti-neoliberal struggles of the previous decade and challenged the dictatorship in the streets. Militant peasant, indigenous, and labor movements were essential to LIBRE’s victory, but Zelaya’s liberal faction is the dominant force in the governing coalition. Popular organizations must now navigate the pitfalls of demobilization and co-optation as they seek to hold the new government to its promises while fending off destabilization from the Right.

Castro inherits an indebted, ransacked state apparatus, an export-dependent economy in crisis, and a dangerous oligarchic opposition. The judiciary and security forces remain profoundly corrupt and beholden to the old regime, such that the government preferred to extradite her predecessor Juan Orlando Hernández (JOH) to the United States for drug trafficking rather than try to enact justice domestically. The administration has requested UN support for an international, anti-corruption commission in the style of the body that was expelled from the country under JOH.

Castro’s first acts prioritized dismantling the dictatorship’s designs. Declaring electricity a public good and a human right, a reform to rescue the National Electric Energy Company pledges to renegotiate contracts, reserving the right to confiscate noncompliant plants. Legislators repealed the framework for the loathsome autonomous free-trade enclaves called “Zedes,” as well as an Hourly Employment Law that shredded labor protections. At the same time, the president has bolstered social spending and is rolling out targeted cash transfers to families in extreme poverty. New bodies like the Secretariat for Strategic Planning and its Popular Power dependency hope to formalize movements’ role in public policy.

But implementation remains an open question. The environment secretary announced the cancellation of extractive permits and declared the country free of open-pit mining, but the measure has not been enforced. After Congress passed an amnesty for the dictatorship’s political prisoners, the Supreme Court overturned it. And libertarian investors who colonized part of the Caribbean island of Roatán are challenging the Zedes abolition. Upcoming elections in Congress for Supreme Court magistrates and the attorney general will prove key to enforcing reform, together with sustained pressure from below. In the longer term, however, change will depend on fulfilling the resistance movement’s demand for a National Constituent Assembly.

The Castro government must create capacity for self-determination in a state constructed to serve monopoly capital. Honduras is especially vulnerable to US pressures to maintain the country’s subordinate insertion in regional free trade and security regimes, with extensive US military presence throughout its territory and long-standing economic dependency. For the Left, the dictatorship’s defeat is only the first stage in a long transition process toward the democratic refoundation promised in the LIBRE party’s name.

This is part of Africa Is a Country‘s Latin American Lessons series.