Home / News / Technocrats Will Never Stop the Far Right, in Italy or Anywhere Else 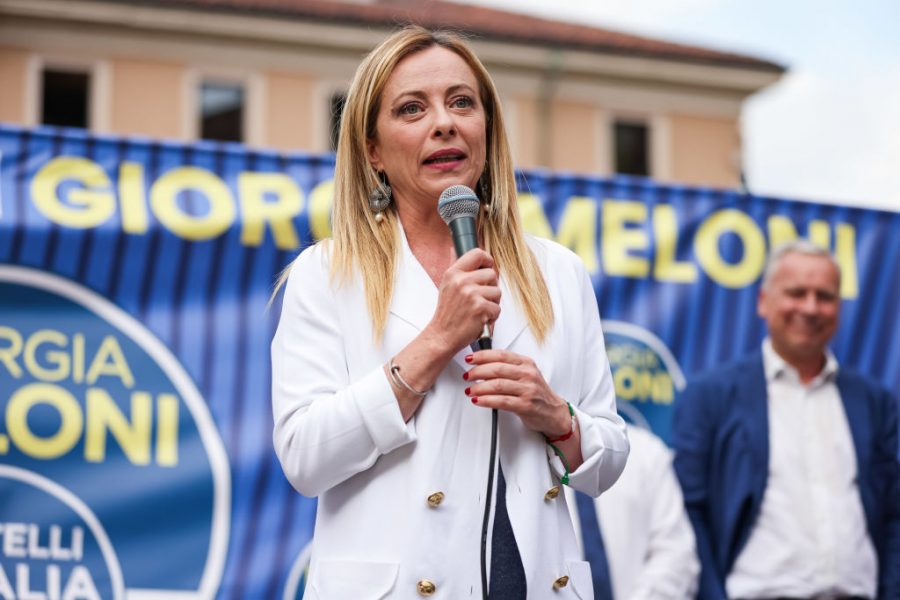 Fratelli D’Italia party leader Giorgia Meloni attends a rally for the elections in Piazza Roma on May 30, 2022 in Monza, Italy. (Alessandro Bremec / NurPhoto via Getty Images)

For most of the last week, Italian media was immersed in speculation on whether Mario Draghi wanted to remain prime minister — with some outlets almost begging him to do so. Even before his appointment as head of government in February 2021, the ex-European Central Bank chief was widely painted in both domestic and international media as the “Super Mario” who would “save Italy like he saved the euro.” In Italian centrist outlets, this praise never wavered, and in his final days in office, there were even some (very small) street protests to call for him to stay on. For the most sycophantic, Draghi was “the prime minister Italy needs, not the one it deserves.”

Addressing the Senate ahead of a confidence vote on Wednesday, Draghi explicitly referred to this “unprecedented mobilization” in his support. There had been quite a lineup of well-wishers: letters by bishops, doctors, university rectors, industrialists, cooperatives, and trade unions — added to a call backed by well over a thousand mayors. Why imperil the disbursement of European recovery funds, at a moment of continued turmoil? Yet it was hard to credit the idea that “the country had spoken.” After all, the core demand of the minority who did speak up was to maintain a government with no popular mandate, rather than risk snap elections.

Italian prime ministers are never directly elected by the public — and Draghi has never been elected to any role at all. His so-called “national unity” government bore no reference to the coalitions that ran in the last general election in 2018. This was, Draghi noted in his address, a reason why his administration necessarily had to be broad-based, rather than rely on a simple majority of parliamentarians. Yet his speech was hardly well-designed to improve relations with the parties who kept him in office, including the rump Five Star Movement (M5S) and the hard-right Lega. Criticizing these latter for obsessing about their own narrow agendas, Draghi asserted his own mission while claiming to stand above the fray of party politics.

While Draghi came to the Senate outwardly seeking a renewed mandate, his speech instead began his government’s final act. On Wednesday night M5S, Matteo Salvini’s Lega, and Silvio Berlusconi’s party — all previous supporters of his premiership — abstained in a confidence vote, and on Thursday he resigned. Now, Italy is set for a general election on September 25. Polling suggests that the vote could well hand a majority to the right-wing parties, now radicalized under the leadership of the “postfascist” Giorgia Meloni. She had led calls for early elections, insisting that “Italians must have their say” after the collapse of the third government in as many years. Her Fratelli d’Italia party was the only major opposition to Italy’s latest technocrat-led administration — and is now best-placed to take advantage of its collapse.

Meloni seemed delighted at news of the snap election — reportedly telling Lega leader Salvini, “Matteo, we did it!” in a phone call on Wednesday night. But the vote is also set to concretize a major shift within the right-wing alliance, which unites Fratelli d’Italia with the Lega and Berlusconi’s Forza Italia. These three parties have, in different guises, had an on-off pact since the early 1990s, when Berlusconi formed his first government, in which the Lega Nord and the “postfascists” were junior allies. Four years ago, the once-Northern-separatist Lega became the biggest of the three parties for the first time. Now, Fratelli d’Italia is taking over the reins. Polls suggest it represents 24 percent of the alliance’s 45 percent projected vote; in 2018 it had scored just 4 percent.

Its spike of support is certainly worrying, reflecting a long-term radicalization of the Italian right. Yet it also points to the generally volatile nature of the country’s politics since the end of the Cold War, and the challenge that Meloni will face in building enduring support. Italy’s long-term economic stagnation, soaring emigration, and enormous public debt — combined with the policy straitjacket imposed by euro membership — help explain why trust in its more established parties is today at historic lows. But the host of “outsiders” acclaimed as supposed saviors in the post-2008 crisis period — from technocrats like Draghi and Mario Monti to the once-proudly “anti-establishment” Five Star Movement — have stumbled over similar hurdles.

Whoever forms the next government, these long-term ills will be intensified by the fallout of war in Ukraine, an energy crisis, and recession. Telling in this regard were Meloni’s comments on talk show Tg2 Post on Thursday night, suggesting that Draghi had abandoned responsibility for the situation. “I got the impression that Draghi’s attitude [over the last week] only made sense if he wanted to leave,” she commented. “He likely knows Italy’s real economic condition better than we do. He likely took the opportunity of the [splits in] a bizarre majority [coalition] to step aside” rather than “watch the incoming storm” from the prime minister’s office. Instead, he could say this all happened “because he wasn’t there.”

Such speculation on ulterior agendas, known as dietrologia, is common fare in Italian media. Yet, with the parliament in any case set to reach its natural end in spring 2023, it seems plausible that such considerations factored into the play of opportunisms that has brought the vote forward. So far, there is no electoral list of Draghi supporters, akin to the Scelta Civica party set up by allies of technocratic premier Mario Monti ahead of the 2013 election. Yet the soft-left Democrats look particularly keen to defend Draghi’s record as their own, damning the right-wingers who forced early elections and praising the Forza Italia ministers who quit Berlusconi’s party in response.

Ahead of an election widely expected to produce a right-wing majority, we might well ask what a government led by the “postfascist” Meloni would look like. She boasts that she has held office before, albeit only as Minister of Youth and Sport in the final Berlusconi government in 2008–11. The party’s second most leader, Ignazio La Russa, was defense minister in this same cabinet. Back then, La Russa — a figure known for his outbursts and defense of the right to give a “Roman” salute — used his position to insist that the soldiers who fought for Fascist Italy, and not just those who resisted German invasion, had died for their country. The party remains broadly attached to such “both sides-ist” narratives, while insisting that it has left fascism behind.

Such a government would doubtless be some kind of coalition. Shortly ahead of the Draghi government’s collapse, La Repubblica reported that Fratelli d’Italia group chats were identifying potential members of a new right-wing administration “a team of technocrats with a reassuring face,” perhaps even with someone other than Meloni as prime minister. Any such arrangement will clearly also have to reckon with the pressure from the other right-wing parties, with the Lega’s regional governors especially keen to occupy the departments best able to disburse cash. But one telling name mentioned was Giulio Tremonti, economy minister throughout almost all of Berlusconi’s years in office scattered between 1994 and 2011.

It is common to explain the far right’s advance in terms of the defection of the Left’s old working-class base; the neoliberalized “center-left” is increasingly the party of wealthier Italians. Yet talk of “welfare chauvinism” often fails to grasp the more straightforwardly low-tax, low-services agenda that Fratelli d’Italia and its allies promote. Meloni’s party is proud of its unyielding opposition to jobseekers’ benefits, which it claims foster idleness, and polls suggest its support is strongest among the self-employed. At a “programmatic conference” held in Milan this spring, also aimed at eating into the Lega’s heartlands, Meloni insisted that hers was the party of “productive” Italy.

Echoing this line on Tg2 Post on Thursday night, Meloni insisted that recent governments have been “persecuting” the “real economy” and that the way to “fight poverty” was through job creation rather than welfare. Her proposed means of achieving this is itself focused on shrinking the state. While she insisted that Italy’s advantage over competing economies lies the “quality” recognized in its brands, she insisted that above all it had to cut “the cost of labor,” apparently through tax measures. Fratelli d’Italia calls for “fiscal peace,” a term used to suggest that small and medium businesses are being harassed by overmighty tax officials.

A Meloni-led government could also be expected to pursue a harsh identitarianism, given its focus on pushing up birth rates, pushing down immigration (including by imposing quotas), and defending what it calls the traditional family. Drawing on the disdain for “party politics” also pushed by many of Draghi’s supporters, it further aims to replace the parliamentary republic born of the Resistance with a presidentialist one. Clearly, this is nothing like a return to fascist dictatorship. What it does mean is erasing much of the institutional legacy of the postwar anti-fascist parties. Meloni’s party even proposes to criminalize apologia for communism, notwithstanding the fact that Communists helped write the present Constitution.

Doubtless there are many reasons to expect that the next Italian government, including one formed by hard-to-far-right parties, will not be able to spend five years calmly implementing the policies it sets out during the coming election campaign. The war in Ukraine, soaring inflation, and the continued effects of the COVID-19 pandemic on public health care are only the crises that we can see already. But even should reactionary forces in government stumble into these obstacles — testing their efforts to show a ”reassuring” face — alternatives on the Left are still sorely lacking. With the right-wing bloc radicalizing and the liberal center tying its colors to technocratic figures like Draghi, the spaces for alternatives based on renewed social solidarity seem ever weaker.