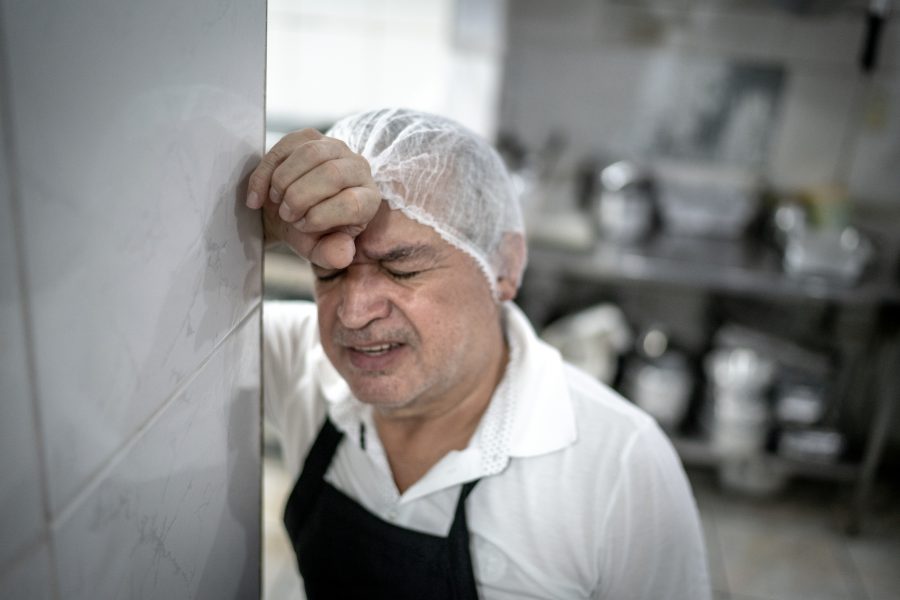 Working in excessive heat is dangerous, and we can’t trust bosses to do anything to protect us – workers need a maximum temperature and a new trade union campaign is fighting to achieve it.

Unite and the TUC are campaigning for a ceiling of twenty-seven degrees in the workplace for strenuous jobs. (FG Trade / Getty Images)

Monday and Tuesday this week saw Britain face an unparalleled heatwave, with some parts of the country reaching a record-breaking forty degrees. Houses burned, and as climate change campaigners warned of worse to come in future years, workers in workplaces across the country were reminded yet again of the scandalously poor protections in place for their safety.

In sweltering kitchens and bars up and down the land, hospitality workers faced some of the worst of it. For them, after this week, the case for a maximum temperature in the workplace has never been clearer.

Unite and the TUC are campaigning for a ceiling of twenty-seven degrees in the workplace for strenuous jobs, like those in the hospitality sector. If met, this demand would provide a legally-enforceable limit that could be pursued by worker health and safety representatives via a statutory grievance process, giving workers a proper protection against the health hazards that come alongside excessive heat.

And those hazards are many: heat stress, heat exhaustion, dehydration, nausea, headaches, dizziness and more are not unusual in overheated workplaces. These problems are dangerous in themselves, and also increase the likelihood of accidents happening around sharp or hot kitchen or bar equipment.

For years, the standard answer given to employees by bosses when they raise concerns about the consequences of excessive heat in the workplace has gone something like: ‘It’s a hospitality workplace. It’s going to be hot. Get over it.’ This like-it-or-lump it attitude is simply no longer good enough. More importantly, it also ignores the fact that employers have a statutory duty to carry out risk assessments under the Management of Health and Safety Regulations 1999.

Good employers will have excessive heat risk assessments in place now, with protective measures instituted, allowing for regular breaks, access to drinking water at all times, and recommendations around shift changes or uniform amendments. But the sad reality is that many do not, or that for those who do, the risk assessment will represent a mere paper exercise that isn’t followed or enforced in any way that truly protects the wellbeing of the worker in the workplace. This is why we need the law to be strengthened.

Stories Unite Hospitality has heard in recent months makes it clear that although this heatwave was a record-breaker, management’s disregard for the wellbeing of workers in extreme heat is nothing new. As a chef, I have first-hand experience of working for a big hotel chain which failed to fix the kitchen extraction for months at the height of one summer: to the bosses, the cost of the repairs outweighed the safety and wellbeing of staff who were as a result forced into stifling conditions. In fact, when I worked in Australia many years ago, I often found the kitchens there were far more tolerable and better air conditioned than those in the UK.

My experience is far from unusual. Rachel, a waitress at a well-known high-street restaurant, recently reported that her workplace had non-functioning air conditioning for months. She was told that if she needed five minutes to cool off, she also had to use this time as her break to drink, eat, and use the bathroom before returning to work.

Jules, a veteran chef of gastropubs, told us that one summer his employer effectively denied all possible breaks for the team all day long: the beer garden was too busy, he said, and the team too small. This a breach of 1998’s working time regulations, and it also constituted a health and safety risk.

Amy, a worker in a popular hotel chain, told us she faced a disciplinary process at work one summer as a result of removing her tights, despite the fact that the lobby area in which she was working had reached a sweltering thirty-seven degrees. Her bosses also wouldn’t allow staff to drink water in front of guests.

We have also heard the horrendous story of a London barista forced to operate a site alone during this week’s heatwave: no break, excessive heat, huge queues.

So many hospitality workers have stories like these. Those stories are why Unite Hospitality fully supports the TUC campaign for a UK maximum temperature, and why this heatwave is once again a reminder of the importance of workers coming together in trade unions to fight for their basic rights to a workplace that is not dangerous to their health or wellbeing. We’re urging workers to come forward and join us, and to enforce their workplace rights.

Hospitality bosses across the sector have put their often huge profits ahead of the safety of workers for far too long, and hospitality workers know it, which is why Unite Hospitality is the fastest growing sub-sector of Unite. We’re proud of our record taking on ruthless hospitality employers, and we’re not stopping any time soon. After all, your safety comes first.

Sign the petition for a maximum working temperature here.