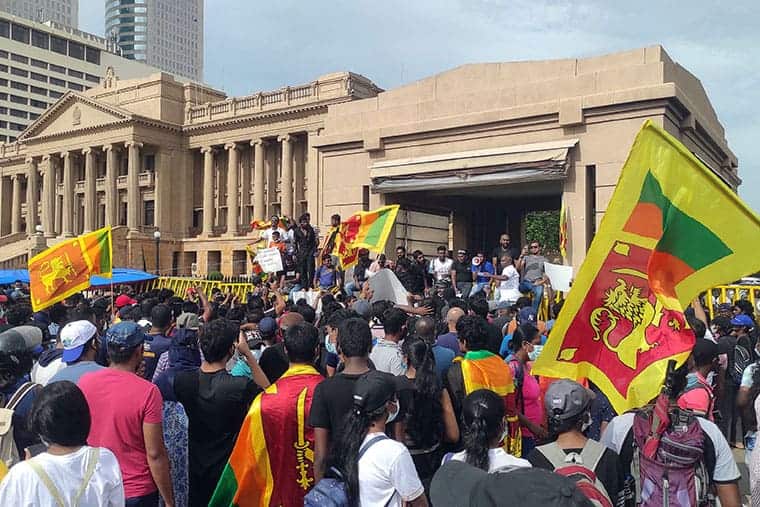 Sri Lanka’s newly installed president, Ranil Wickremesinghe, was quick to flash his teeth at the protest movement that has gripped the country since the spring.

Within hours of being installed in office on Thursday, he sent the police and army to break up the main anti-government protest camp in the centre of the capital, Colombo. He described the democracy activists there as “fascist”.

Many people were hurt and soldiers snatched protesters’ mobile phones in a bid to stop footage of the assault going viral. Even a BBC reporter had their videos deleted.

The attack came after some protesters said they were prepared to give the new president a chance to lead the country out of crisis.

The police action was Wickremesinghe’s response.

But, if the new president thinks boots and batons will be enough to snuff out a movement that has already dispatched his predecessor, he is mistaken.

Thousands of people have already faced down heavily armed troops and tear gas, despite many not having eaten properly in weeks.

Wickremesinghe is already a deeply unpopular figure and strongly associated with the fallen Rajapaksa regime. As a government minister in the 1980s, he helped break a general strike and initiate anti-Tamil riots that were to lead the country into civil war.

Neither he nor the politicians that voted him into office, are capable of giving the people what they want—the return of electricity, food, fuel and medicines.

All of these are in desperately short supply after Sri Lanka spun into a debt crisis earlier this year.

“We are watching the situation anxiously,” Kalani, a teacher that joined the huge protests last weekend, told Socialist Worker.

“If Wickremesinghe attempts to carry on with the same agenda, he will have to face the wrath of the people.”

Like many people, Kalani has little or no faith in the political establishment.

“Politicians seem more interested in their own wellbeing and positions in parliament than solving the economic crisis. It’s most disgusting,” she said.

The new government is attempting to clear the way for a re-financing deal with the International Monetary Fund (IMF) that would see an influx of money.

But that cash will not come anywhere near workers. Instead, Wickremesinghe will use it to pay down existing debts—owed mostly to global private investment funds.

Any IMF deal will come with a large price tag for the poor. The Fund will demand huge cuts in jobs, government spending and the privatisation of state assets.

Unfortunately, the main left parties will likely go along with this—at least for the time being.

The track record of groups which had radical origins, including the once Maoist Janatha Vimukthi Permamuna (JVP) and the once Trotskyist Lanka Sama Samaja Party (LSSP), is to use any crisis an opportunity to make deals with the ruling party.

And, most shamefully, both have at times embraced Sinhalese chauvinism used to oppress the Tamil minority. That means the task of resistance to the coming neoliberal onslaught is the sole responsibility of protest groups and workers’ trade unions.

They have already shown an impressive ability to mobilise, and to resist the armed thugs of the Wickremesinghe regime. But to beat the entire political establishment will require going beyond even that and to turn the revolt into an alternative source of power in Sri Lanka.

Socialist Worker has changed the name of the protester quoted.