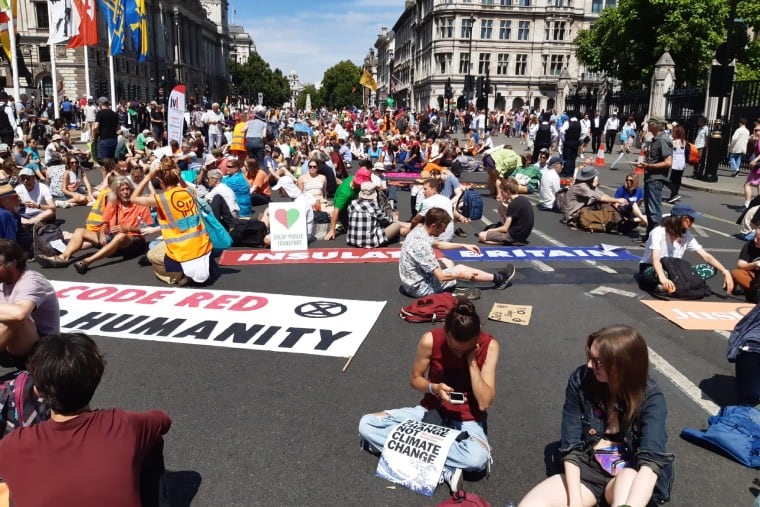 Over 1,000 people joined protests in London on Saturday around the slogan “Cost of Living Crisis and Climate Crisis: The Same Crisis”.

Demonstrations came from a series of assembly points across the capital and converged on Parliament Square where hundreds of people blocked roads for over an hour.

The day was organised by a coalition of forces headed by direct action climate group Just Stop Oil, Jeremy Corbyn’s Justice and Peace project, Fuel Poverty Action and Insulate Britain. The broad group called itself “We all want to Just Stop Oil.”

Around 300 people marched from Euston. Paula was one of them. She told Socialist Worker that seeing wildfires and heatwaves across Europe prompted her to join the demonstration.

“I’m from southern Italy, and for the last two years, summer temperatures have reached upwards of 35 degrees every day. So you can see something is changing.

“I’m concerned about the wildfires, and I’m scared for my family and the people that live in the path of fires.”

She added, “The heatwaves and wildfires need to be a wake-up call. Strengthening the climate movement across Europe is essential.”

Extinction Rebellion supporter Russ had travelled from Northampton to be at the protest. He added that he thought that the heatwaves had shown to many people that collective, not individual, action is needed to fight the climate crisis.

Student Zaynab said, “In my home country, Pakistan, extreme temperatures are becoming more and more frequent, but this is much less reported than events in Europe.”

Zaynab said she joined the demonstration after getting an email from the Peace and Justice Project. She added that bringing together activists from different parts of the movement is essential.

Janice is a Labour Party member from north London who came to the demonstration after being contacted by Peace and Justice. She told Socialist Worker, “I am so fed up with the way politics has gone, and Keir Starmer won’t change anything,”

“We need to build this coalition because there is strength in numbers. Earlier this year Just Stop Oil shut off a third of the country’s petrol production. We did that with just a few hundred people. Think what we could do with thousands.”

We All Want to Just Stop Oil’s next event is on Saturday 1 October—Occupy Westminster. The group says, “Thousands of us will come together for an Autumn of Action: strike, don’t pay, occupy: starting at 11am, Parliament Square, Westminster on 1 October.

“Like Extinction Rebellion did in April 2019, forcing the government to respond by occupying central London. But this time involving many more people from a wide coalition of groups, building a deeper, more powerful movement.

“In October everything will come together—strikes, nonpayment of bills, and occupying Westminster. When these three means of resistance come together, anything can happen. We have no time left. We have to do what we have to do.”

Certainly, militant mass protests that link the climate crisis and the social emergency are desperately needed. Trade unions fighting back should be part of the October protests.

For details of the 1 October event go to weallwanttojuststopoil.com