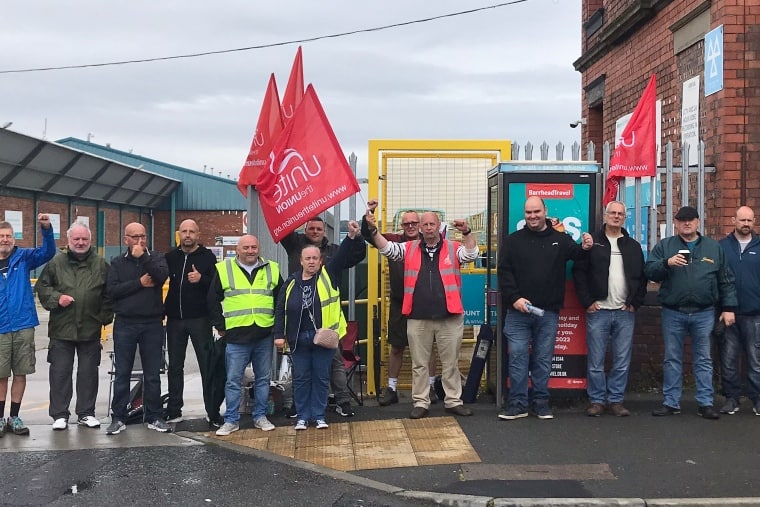 More than 1,800 Arriva bus workers are on an all-out, indefinite strike across Merseyside. The action involves mainly Unite union members, and also a small number of GMB union members. It began on Wednesday and is for a pay award that catches up with inflation.

The dispute has broken out after years of pay erosion for the workforce. Indeed, wages for the drivers are well below the British average.

For this year’s pay talks, Arriva started with an insulting offer of around 2 percent. As action loomed, company negotiators increased the figure in stages. Finally, when 96 percent of Unite members voted to strike on a turnout of 72 percent, the employers upped their offer to 8.5 percent.

But as the strikers point out, this is still way below inflation. Indeed, the company isn’t even being honest.

The offer is for a 5 percent rise until October, and then another 3.5 percent from then. That works out as only 6.75 percent over the year, even though Arriva’s press statements keep giving the higher amount.

In a dispute earlier in the year Unite members at Stagecoach won around 11 percent. The Merseyside strikers want at least a similar deal on pay, one that keeps up with the RPI-indexed inflation rate, currently running at almost 12 percent.

The employers have had to announce that they are unable to run bus services across the entire region during the strike.

The strikers also feel part of a bigger fight growing among workers across Britain. Chris Jones, branch secretary at the Laird Street Arriva depot in Birkenhead, said, “To be honest when we first came out, I didn’t feel it. But the support we’ve had has been amazing.”

He described how confidence has been growing during the strike, and how as the fight goes on, what is seen as an acceptable deal keeps changing upwards. “The longer you’re out, the more the figure goes up. There’s a growing sense of confidence,” he said.

Chris also talked about how solidarity visits to the picket line have contributed to that feeling of strength, and how the pickets have been solid, with nobody trying to cross. Chris finished with a message to other workers about striking “if you’re going to do it, this is the time.”

Around 50 Arriva North London bus drivers and their supporters marched 4.5 miles on Saturday to highlight the campaign against bus cuts and bigger gaps between buses on all Transport for London services.

Marching through mainly working class areas of Enfield and Tottenham it was obvious who the cuts will hit—the old, disabled people and women with children. This was only a small beginning to a high-profile campaign across London. Arriva North garages have voted by 960 to 16 to take on the company in an indicative ballot on pay.

The mood is there for a fightback and the chance to join others ready to take on the bosses and whoever becomes prime minister.