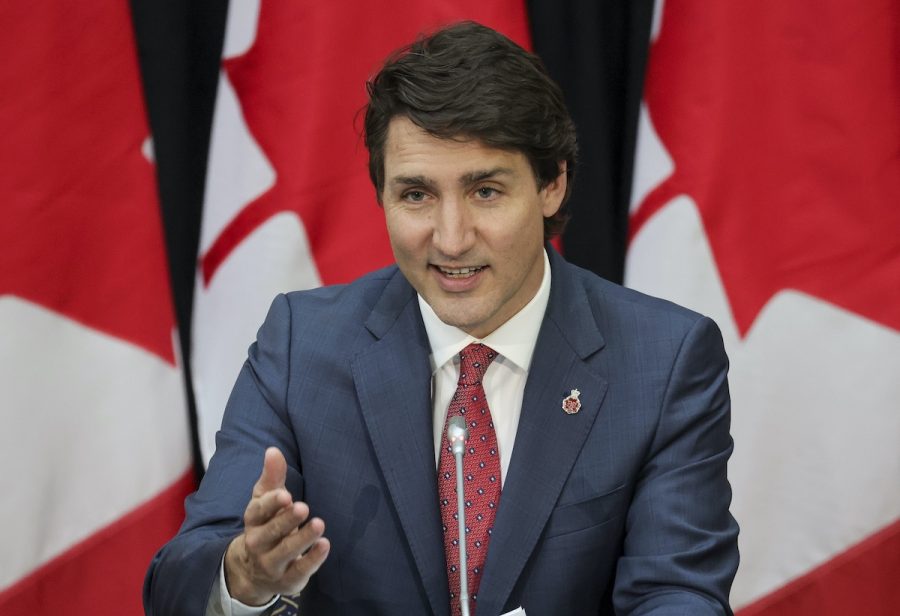 Justin Trudeau’s Infrastructure Bank is facilitating private investment in the water sector. But municipalities’ water systems will not be improved by the good-heartedness of private investors — they will take their pound of flesh by hook or by crook.

Justin Trudeau’s Canada Infrastructure Bank has accomplished little, but it has plotted to “leverage” public infrastructure in the service of private capital. (Chris Jackson / Getty Images)

The Canada Infrastructure Bank (CIB), set up by Prime Minister Justin Trudeau in his first few months of office, is eagerly looking to let private investors “renew” the “water sector.” It is a development in water provision that no one demanded. If realized, it will almost certainly make life worse for everyone, enabling private finance to gouge consumers over one of life’s most vital necessities.

Since 2015, the Trudeau Liberals have insisted that the multibillion-dollar CIB will speed up infrastructure builds across the country by unlocking seed money from pension funds and institutional investors. In its early months, Trudeau courted advisors from BlackRock, McKinsey, pension funds, and other large investment pools to set up the private financing vehicle.

“This is about making sure our public dollars go farther and are used smarter, as we make historic investments in infrastructure to create middle-class jobs today and sustained economic growth for years to come,” Trudeau said of the bank.

However, despite a series of secret meetings with financiers and over $35 billion in public spending, the CIB has largely failed to build much of anything new. But six years on, the bank’s officials have done a lot of plotting to “leverage” existing public infrastructure in the service of private capital — including water infrastructure.

In 2020, the Infrastructure Bank announced it would direct $20 million to “attract private sector capital” to overhaul the wastewater system of Mapleton, Ontario. Over the next few months, the town council launched a prospective public-private partnership (P3), with a proposal to set up a “debt refinancing package” to pay the investors back — plus interest. According to the CIB, in 2020, this was a “new model” for cash-strapped municipalities everywhere.

Pierre Lavallée, then CEO of the CIB, claimed at the time that “the financing support and infrastructure expertise provided by the CIB to the Township of Mapleton’s project will ensure long-term access to sustainable public water and wastewater facilities.” Lavallée felt that the project would set the stage for new development of water systems across the country, gushing that it was “an opportunity to create a new model that could improve publicly-owned water and wastewater systems, including in smaller communities across Canada.”

The residents of Mapleton, however, did not share Lavallée’s confidence, and pulled out of the project, citing long term costs. The CIB, meanwhile, has not backed down in its commitment to bring P3s to the forefront of Canadian infrastructure development.

At a public meeting in mid-2021, CIB CEO Ehren Cory promised that the bank would expand further into the water business. This, Cory argued, would open new vistas for the CIB by virtue of the simple the fact that water has an extensive base of people who need it — i.e., everyone — and who can be made to pay for it.

“Our idea is, can we catalyze more getting done by leveraging private capital?” Cory asked, before declaring that “The CIB [was] created to fill a niche.” Noting that some infrastructural goods, like broadband, can be entirely private while others, such as hospitals, are in public hands, Cory sagaciously observed that “there is a group in the middle.”

Wastewater systems and the like, Cory argued, have “an element of revenue streams associated with [them] in some way shape or form. . . . Water’s a great example of this. . . . Water has customers who pay for the use of that. It pays for part of the use of that asset.”

In a spate of enthusiasm about the potential of the “water sector,” Cory resorted to corporate jargon so thick it became a word salad:

So, when we talk about innovative models, what we’re really talking about is how do you leverage that to get innovation, to get private sector financing to come to the table, to drive acceleration in the renewal of our water sector. . . . Take the current asset, take the way it’s run today and can we leverage that to create a hybrid funding model that has both public and private. So, that’s what the kind of innovative, new investment model that we refer to, that’s what we’re talking about.

The reality is that private capital will not finance a multibillion-dollar bridge or repair a water system simply out of generosity —their investment must be incentivized. Simply put, they must be promised some form of return.

In a 2020 report, the Canadian Water Network — a group headed up by at least one CIB official — noted that the Mapleton agreement would most likely set up “concession/service agreements” between private capital and the cash-strapped city council. The agreement would, according to the network, ensure that the “private sector” would receive “ongoing payments from the municipality” or payments from “user rates.”

This is the nub of the matter. P3s are presented as panaceas to municipal and provincial problems, but, in essence, they simply channel money from public coffers to private hands. As Lavallée explained to IPE Real Assets in 2018:

There is a real appetite among private and institutional investors to invest in new infrastructure projects with a reasonable risk-reward equation. In a bank project, we will co-invest alongside private investors, and potentially governments, during the construction phase of the project. When it is operational, users will fund the bulk of the operations and of the returns to investors through user-fees and other revenue mechanisms.

The Water Council’s 2020 report noted that the Mapleton project was to be Ontario’s first “Design-Build-Finance-Operate-Maintain” project. Such projects allow the private sector to design, build, and provide maintenance services to a utility. They also provide the private sector the opportunity to cut costs unilaterally — at the expense of workers and service users.

Under this framework, a municipality may or may not retain formal control of the facility’s day-to-day operations. However, the municipality would be obligated to find some way to free up cash to pay back the private investor — plus interest.

The Politics of “Leverage”

When the Liberals first proposed the bank, Trudeau said it would “transform our transit and transportation systems, create more livable communities, and ensure that we adapt to a changing climate.” While it has mostly failed to accomplish anything positive, the CIB’s has issued plans to expand into public transit and energy programs — based on the same principles underlying the wastewater “renewal.”

The CIB’s 2019–2020 annual report, for example, laid out its plans to collect revenues from transit systems and energy grids. The report made it very clear that, in the case of transit, the money would come from the “fare box.” These P3 nostrums will require transit users to subsidize interest payments to private financiers. In a statement to PressProgress, the CIB confirmed that its overall mandate was to back “revenue-generating” projects that are “commercially-structured” and covered by “payment for a service by users.”

According to the CIB, the water sector offers stable profits not because it is ripe for competition but because there is no competition — ratepayers need the service but have nowhere else to turn. The CIB’s plan is, in effect, to allow finance to rob the utilities or gouge rate payers. In the first case, each and every dollar that goes to pay back private finance is a dollar that isn’t going to service delivery and improvement. In the latter case, should rates rise alongside runaway inflation, it will leave regular people poorer.