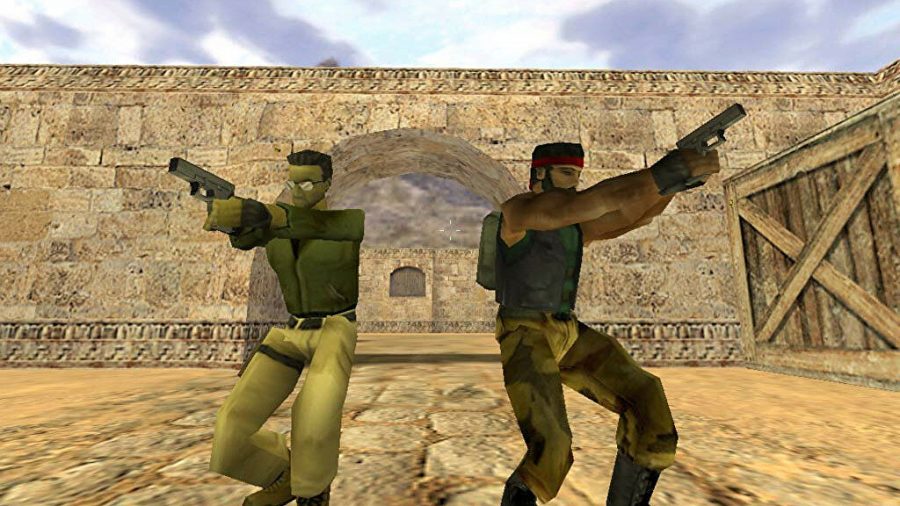 Developed as a passion project, Counter-Strike became a video game phenomenon. It also served as a laboratory for the exploitation of video game labor and the commodification trends that dominate the games industry and the broader internet today.

Counter-Strike’s sudden and unexpected popularity helped push forward many of the trends that we recognize as fundamental to today’s digital economy. (Valve)

If you were involved with PC gaming in the early 2000s, it was almost impossible to avoid Counter-Strike, an online tactical game that pits one team of counter-terrorists against another team of terrorists in multiple objective-based rounds.

I was personally introduced to Counter-Strike in the most 2002 way possible: at an internet café in the Beaches neighbourhood of Toronto. I was hooked less by its skill-based team-play aspect and more by the prospect of exploring the boxy 3D environments that approximated real-life locations like offices, warehouses, and ancient ruins. While immersing myself in Counter-Strike’s distinctive online subculture, I had little idea I was participating in a game that would lay the foundations for the next phase of digital capitalism.

Counter-Strike hasn’t gone anywhere. In fact, it’s more popular and successful today than when many of us first played the game twenty years ago. The latest iteration of the franchise, Counter-Strike: Global Offensive, boasts 21 million monthly players and, in 2018, made over $400 million for its parent company, Valve Software. Through a combination of free labor, audience capture, and opaque economics, the original Counter-Strike helped Valve consolidate much of the burgeoning PC digital distribution sector and extend the value, longevity, and significance of its own proprietary software.

Counter-Strike was neither the first nor the only game to take advantage of free, exploitable digital labor or innovative audience control schemes, but its sudden and unexpected popularity helped influence and push forward many of the trends that we recognize as fundamental to today’s digital economy.

The game was initially developed in 1999 by Minh Le and a loose coalition of amateur developers as a completely free modification for Valve Software’s popular first-person shooter Half-Life. The practice of modding involves modifying another game’s original source code, usually through a provided editor or software development kit, to develop new levels, game assets, or, in the case of Counter-Strike, an entirely new game. Counter-Strike was not the first mod, but it became one of the most successful, highlighting free labor’s role in increasing the value and longevity of high-turnover digital commodities like video games.

In the late ’90s Minh Le, a self-described military-action enthusiast based in Vancouver, British Columbia, had already developed a significant reputation as a modder with his Navy Seals mod for Quake and his weapon-model designs for another popular mod, Action Quake 2. While this gave him a certain online cache, it wasn’t clear if his reputation would translate into a games career. A 1999 interview with Le about Counter-Strike captures the labor-of-love aspect of modding: “I would much rather play a mod that was developed around my vision of the perfect game.”

Le would eventually be hired by Valve to continue working on Counter-Strike after the company bought the rights to the game, but his story is an anomaly. The free labor of modding rarely results in career advancement.

As Ian Williams and Daniel Joseph observed in Jacobin, proper or fair compensation for modding is difficult, even as “there are entire subgenres of game that are sold primarily on the backs of the free mods available.” This is largely because modding is often framed solely as a hobbyist pursuit. Meanwhile, game companies like Valve often put modders under restrictive licensing regimes. As Julian Kücklich argues, this position is hypocritical: Half-Life itself is based on a heavily modified version of id Software’s Quake and its game engine. But despite their contributions, modders are afforded fewer rights than average video game workers due to “the very restrictive end user license agreements (EULAs) they have to agree to when installing the game.”

Counter-Strike didn’t begin the trend of exploiting free labor in videogames, but it did unintentionally accelerate new methods of commodifying digital play. The success of Counter-Strike confirmed the value of controlling a ready repository of free labor. The practice of obscuring free labor has become fundamental to the operation of all kinds of connective platforms, which, from YouTube to Roblox, rely heavily on freely produced user-generated content for market share and profit.

In 1999, the growth of Counter-Strike on PC was an organic phenomenon that demonstrated how building and locking in an audience is fundamental to increasing the value of digital commodities. Alice O’Connor identifies Counter-Strike as the first “live-service” game. Counter-Strike unexpectedly became a model for how to substantially improve the popularity of the game with an engaged audience and constant feedback.

Counter-Strike’s first beta release was notoriously rough and buggy, with players sometimes unable to distinguish between friend or foe. But the game retained and then grew its audience significantly as it continually updated itself in response to player feedback. As each new release refined and smoothed out the rough edges and added new gameplay elements, Counter-Strike created a virtuous cycle between feedback and growth. Valve became involved when Counter-Strike’s regular player numbers surpassed commercially released online action games like Quake III and Unreal Tournament.

The massive popularity of Counter-Strike gave Valve the ability to perform a textbook example of “platform lock-in,” which occurs when a platform significantly increases the switching costs of moving away from a service that it operates. In Valve’s case, that meant launching its own digital distribution platform, Steam, in 2003.

I remember being quite reluctant to switch to Steam, as it was prone to crashing or taking forever to update its hosted games. But less than a year later, Valve shut down support for its previous multiplayer server system, World Opponent Network, in 2004. This meant that anyone who wanted to play the officially supported version of Counter-Strike would have to do so on Valve’s Steam platform.

Counter-Strike unexpectedly helped pioneer games as a continually updated service, but it also helped Valve monopolize the PC digital marketplace. Valve’s Steam platform is now responsible for almost 75 percent of all digital PC game sales, a feat that would have been impossible if the company hadn’t been able to shift over and lock in the audience for Counter-Strike.

Counter-Strike is more than just a tactical team-play game; it’s also a game of economic management. At the beginning of each round, each team buys the weapons and items that they are going to use, ranging from submachine guns and assault rifles to night-vision goggles and bomb-defusal kits. At the start, each player only has $800 of in-game cash to buy equipment, a sum they can grow each round by successfully eliminating enemy players, completing objectives, and winning the round. Winning teams can often establish a clear advantage as extra funds allow them to buy better weapons. Recently, Valve has elevated this aspect of the game into its own lucrative item economy.

Once again, it was the work of Counter-Strike’s community that established a foundation for what would become an unexpected moneymaker. Counter-Strike itself was modifiable by dedicated players, meaning there were tons of models, weapons, and texture packs that could be downloaded to change the look and feel of the game. Custom models added a bit of flair and whimsy to an occasionally tense tactical game. In 2013, Valve added custom “skins” for weapon models to the current iteration of the franchise, Counter-Strike: Global Offensive, that can be earned for free or purchased through a loot-box system. These skins have their roots in the custom model packs originally created by the Counter-Strike community.

Although one would think these custom skins would have no real-world value, rare skins can be sold or traded legitimately through the Steam Community Market — in some cases for thousands of dollars. In addition to earning revenue from direct purchases of random skins to buy and trade, Valve takes a 15 percent cut of all Steam Community Market transactions.

Early on, Valve understood the profitable potential of being the key intermediary in its own virtual-item economy. The high valuation of certain skins in Valve’s item economy has led to a high degree of illegal gambling. Although Valve has cracked down on many illegal gambling sites, it still enjoys the residual benefits of facilitating the trade and sale of so many high-value digital items.

Counter-Strike offers a compelling case study in the commodification of play and its larger implications for our digitally mediated marketplaces. Valve quickly transformed game creation, audience participation, and community content into free labor, market monopolization, and a lucrative virtual-item economy. And all of this was possible because Counter-Strike was a popular mod for Half-Life.

But it doesn’t have to be this way. Thanks to the creativity of its community, Counter-Strike has long been more than all that, too. It’s been a place for taking advantage of in-game physics glitches for competitive climbing, jumping, and surfing. It’s been a place for driving glitchy, barely functional vehicles. For me, it was a place to explore an occasionally surrealistic virtual space that constantly hinted at different worlds and places beyond my perception — or for spending way too much time fragging friends in the mysterious and anonymously designed Iceworld.

While digital play remains highly exploited, it still contains within it the potential for resistance. “If the modding multitude,” Julian Kücklich writes, “were able to play their dispersal to their advantage — for example, by collaborating with other free labourers on the Internet — the result would be a genuine democratisation of the production of digital games.” Only by organizing the necessary labor, both formal and informal, that truly produces the value of games and other digital commodities will we be able to stop playing the game set by the tech industry and finally win.