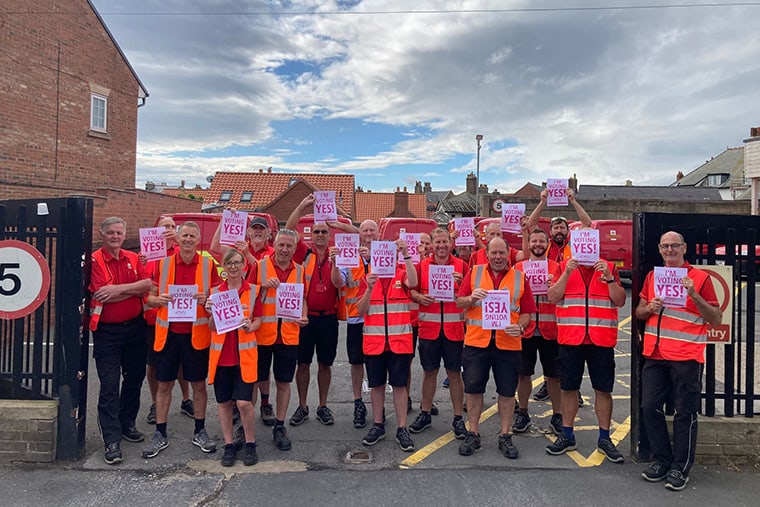 Second ballot in post after massive backing for strikes

Workers in Royal Mail have begun voting in a separate ballot for national strikes over jobs and conditions—after overwhelmingly backing action over pay. Members of the CWU union voted by nearly 97 percent on a 77 percent turnout to strike after bosses offered a percent pay increase—a massive real terms pay cut.

Yet, announcing the ballot result, general secretary Dave Ward said the union wouldn’t call action immediately. Instead, he said he and other union leaders would “act responsibly.” “We will give them another opportunity to come back to the negotiating table,” he said. “They have a small window and if they don’t respond to that we will notify the business of industrial action.”

The following day, CWU leaders called another strike ballot, this time over bosses’ attacks on jobs and conditions.

These include making Sunday a normal working day, introducing “seasonal hours”—longer days in winter and shorter in the summer—and different terms and conditions for new starters.  Royal Mail bosses previously wanted CWU leaders to accept these attacks in return for a slightly improved—but still below-inflation—pay offer. The ballot is set to end on Wednesday 17 August.

Workers overwhelmingly rejected a 3 percent pay offer from the University and Colleges Employers Association in May. The Unison union says employers refused to increase their offer despite demands for a rise of 2 percent above inflation.

This follows a decade of pay freezes and real terms pay cuts. Staff struggle to make ends meet as prices continue to soar and have been left with no option but to consider striking, the union adds.

Other education unions, including the UCU, have also rejected the 3 percent offer and are preparing their own ballots.

Unison head of education Mike Short said, “University staff have endured years of wage stagnation. With prices going through the roof and inflation at an all-time high a 3 percent pay offer is a significant pay cut.

“Workers are desperate for a wage increase that reflects the work they do to keep universities going and to make up for years of poverty pay.”

The ballot closes on 19 August in Scotland and on 26 August in England and Wales. Every activist must push hard for a big turnout and a thumping yes vote for strikes.

The smelliest August in Surrey for many years

Refuse collectors in Surrey were set for three weeks of strikes from Monday. They are employed by outsourcer Amey in Elmbridge and Surrey Heath.

This area, which includes Camberley, Cobham, Esher, Frimley, Walton-on-Thames and Weybridge, will see no kerbside rubbish collection for the period. It will run to 19 August.

GMB union members are already looking at announcing further dates should the bosses not move on pay.

Paul Grafton, GMB regional officer said, “We have continually pushed Amey since April over pay as our members feel they are woefully underpaid and completely under-valued.

“Our members are at least £3 an hour underpaid, plus they don’t have the same levels of sick pay or pension benefits compared to those who are still working under local authority control elsewhere.

“Residents of Surrey Heath and Elmbridge Borough Councils can now look forward to what is looking likely to be the hottest and now probably the smelliest August for many years.”

Outsourced security guards in the courts and tribunals service were set to strike on Friday of this week and Tuesday, Wednesday and Thursday of next week.

The guards, who work for outsourcer OCS, are fighting for a raft of pay demands, including the real living wage.

Their PCS union is also demanding a £500 one-off payment, full occupational sick pay from day one, an additional day’s annual leave, and paid time off for medical appointments.

Glasgow subway workers are set to strike on 6 August over pay. Further action is planned for 9,13 and 27 August.

The first strike would hit the Rangers home game of the season.

Unite union members voted by 99 percent for strikes on an 83 percent turnout.

Unite represents over 200 members at SPT including train drivers and station staff.