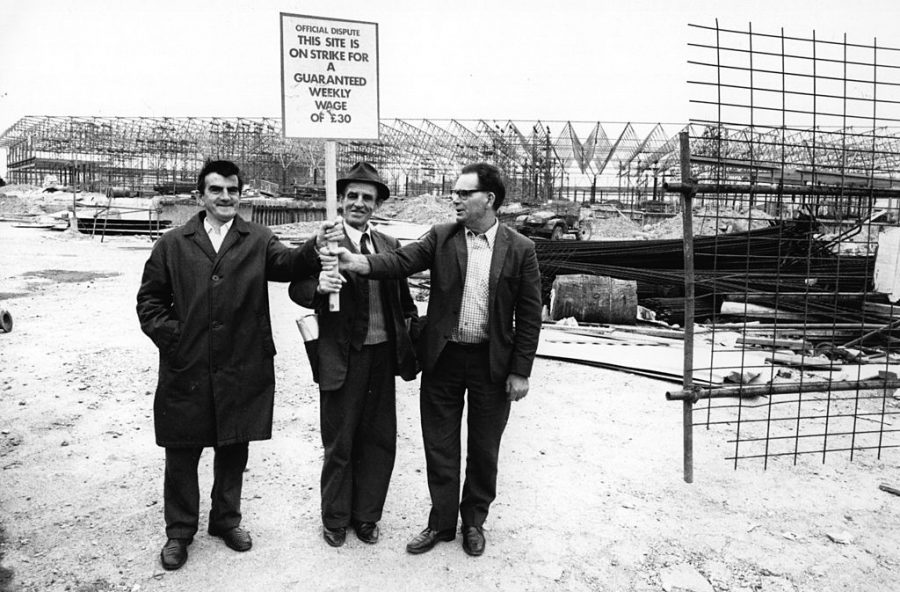 This summer 50 years ago, British building workers, long considered impossible to organise nationally, went out on strike and won the largest single builders’ pay rise ever – but they were met with state persecution and blacklisting.

This year marks the fiftieth anniversary of the first and only national building workers’ strike. The dispute witnessed, for the first time in the history of the industry, craft and unskilled building workers come together and lodge an across-the-board wage claim of £30 for a thirty-five-hour week.

This common goal increased solidarity action among the diverse rank and file of the trade unions representing construction workers. UCATT represented skilled workers and the T&GWU organised labourers; the GMWU and FTAT had smaller sections of both. But trade unions were also weakened by an ‘in-house’ strike-breaking force, ‘lumpers’—a pool of non-union labour who worked on sites for a lump sum, cash in hand. No tax, no national insurance, no holiday or sick pay.

Conditions on building sites at the time were appalling. In 1972 alone, 190 building workers were killed, and tens of thousands were injured through accidents at work. UCATT’s monthly journal, Viewpoint, carried regular reports of accidents. One covered the prosecution of an unnamed employer manufacturing bricks: the employer had failed to prop up a damaged kiln that needed repair, and it collapsed onto an adjacent kiln, which should also have been propped up, killing three men who were working inside.

That company was fined just £100, plus £4.50 costs. Another three deaths occurred in 1972 on the Loddon Bridge site of Marples Ridgway, which resulted in a £300 fine, at the time the maximum penalty.

Employers’ high profits, at the same time, were the result of very low wages. At the start of 1972 the basic rate for skilled workers was just £20, and for labourers, £17, placing building workers in the bottom quarter of the table for adult male weekly wages. A building worker’s life and labour, put simply, was cheap.

Connected by their main negotiating body, the National Federation of Building Trade Employers (NFBTE), the construction companies, by contrast, were powerful, and buoyed by longstanding links with the Conservative Party, in power at the time.

Keith Joseph, the cabinet minister responsible for health and social security, was connected with Bovis. Nicholas Ridley MP, a junior minister in the Department for Trade and Industry, was a construction company director and engineer. The home secretary, Reginald Maudling, had resigned in July 1972 following a scandal related to his connections with property companies. Ernest Marples, a Conservative MP from 1945 to 1974 and a government minister between 1957 and 1964, had owned eighty percent of the shares in Marples Ridgway, and as minister for transport he championed polices known as the Beeching cuts which had slashed Britain’s railway network, and promoted extensive road building, from which his company benefited enormously. The Minister of Employment, Robin Chichester-Clark, became a consultant to the NFBTE when he stood down from Parliament in 1974.

When the action started on 26 June, it was on a selective basis. Each region identified ten or so important sites to strike in their area, ones where the employer was vulnerable to time penalties in the contract. The unions believed that this would put pressure on the contractor to settle, and then a further group of sites would be brought out.

On the first day, thousands of building workers throughout the country stopped work at lunchtime to take part in demonstrations. In Liverpool, 10,000 marched in support of the claim. UCATT issued a leaflet to members who were not called out on strike headed ‘Back the Wage Claim’: halfway down it stated in capital letters, ‘Your site is asked not to stop work but to support this industrial conflict with financial contributions to the strike fund.’ It suggested that working sites should ‘adopt’ a site that had been called out on strike and guarantee it a fixed sum of money each week. They were also asked to ban overtime.

Flying pickets travelled in cars, and sometimes by coach, to working sites to explain that all building workers were on strike and all work should stop. (Shrewsbury 24 Campaign)

Harry Chadwick, a Wigan joiner who became Chairperson of the Shrewsbury 24 Campaign, was active throughout the strike. ‘At the beginning, there was hesitancy in calling for an indefinite all-out strike, even amongst Charter supporters,’ he recalled. ‘We were not certain that it would be supported by all union members. But this changed very quickly when pickets visited working sites to talk about the dispute. Many workers joined a union and willingly paid the levy. They were keen to join the strike.’

The unity and confidence of members grew quickly. By the end of July many were not prepared to carry on working and simply pay a levy—they wanted to strike too, to maximise the pressure on their employers. When a further improved offer was rejected by members in the first week of August, despite UCATT’s leadership declaring that it would be accepted, the unions declared an all-out strike, but without strike pay.

Daily meetings of building workers, often in the open air, would identify sites that were still known to be working in their areas. They adopted the tactic successfully practiced by the miners in their dispute of the same year, flying pickets: they travelled in cars, and sometimes by coach, to working sites to explain that all building workers were on strike and all work should stop.

The involvement of thousands of building workers and the tactic of flying pickets proved very effective. By 22 August, the unions reported that 200,000 workers on more than 7,000 sites were on strike. Two days later, the South Western Regional Action Committee proudly reported to the National Action Committee that, ‘In sum total and I can only approximate, I consider that there are about 15,000 building trade workers on strike in this region which is about twice the total of membership of all of the four unions in the building industry before this dispute started.’

This level of participation and the common claim for which they were fighting created a strong feeling of unity and solidarity. This was a major achievement in a workforce that was historically fragmented and had been divided on craft lines.

The strike ended on 18 September, after the union negotiators accepted a new offer of a basic rate of £26 followed by further increases over the following two years. Many activists opposed the settlement, and in Liverpool the strike carried on for a further week, but the overwhelming feeling was that this was still a great victory for building workers. It could be a springboard for increasing trade union membership and organisation on sites—the bedrock on which to continue the fight to eradicate lump labour, improve health and safety, and secure other demands.

The Conservative Party and the employers, however, were not going to let this pass without punishment. One of the Pentonville Five dockworkers, Bernie Steer, warned that trade unionists should prepare for a counter-attack from the Tories and their backers: ‘These people are not finished… they are vicious people and, in my view, they will be like a wounded animal now. They will retreat in a corner; they have had three good wallops and now they are going to start slashing out.’

This was the context for the offensive by the employers, the police, and the government which culminated in the prosecution of North Wales building workers for alleged picketing offences. The main prosecutions were of twenty-four men at Shrewsbury Crown Court. Six were held out as ‘ringleaders’ and tried on three counts: conspiracy to intimidate, affray, and unlawful assembly. At the end of the three trials, six trade unionists had been sentenced to prison, headed by Des Warren, who received three years. Sixteen pickets received suspended prison sentences and only two were acquitted.

These trials had a devastating effect on construction worker trade unionism—one from which, arguably, it has never recovered.  In 1978 Des Warren was to write, ‘Following the 1972 strike, organisation in North Wales has steadily declined to such a degree, that now there is not one effectively organised site in the area.’ The Building Workers’ Charter, in one of its final editions, noted that this was the picture throughout the country: ‘much of our site organisation was broken up, leading shop stewards sacked, and the black list rigorously operated. The growth of unemployment in the industry to 250,000 caused enormous difficulties for getting men into action.’

The building workers’ strike was an historic milestone for construction workers. It showed the potential of workers organised in trade unions and united around a common set of demands not simply to improve pay and working conditions, but to raise standards in construction itself. But the brutal response by the state and the bosses means that today, the power of the employers and their political allies have ensured the predominance of agency work and zero-hours contracts, and shored-up the legacy of Carillion and the shoddy domestic houses that continue to be built by developers. Public ownership of the construction industry is long overdue.