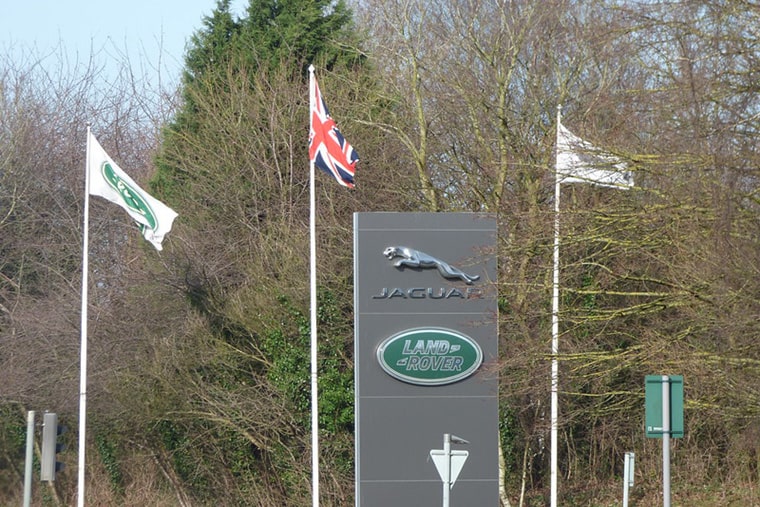 Workers in Unite and other unions rejected a pay cut at Jaguar Land Rover in Solihull (Picture: Elliot Brown)

Workers at Jaguar Land Rover (JLR) in the West Midlands have voted overwhelmingly to reject bosses’ attempt to renege on a pay deal. The vote came despite union leaders’ decision not to oppose it.

Bosses had wanted to backtrack on a previous agreement, and replace it with a below-inflation increase of 6 percent coupled with a £5,000 lump sum.

For lower paid workers including the one-off lump sum would have given a pay increase of 14 percent for this year. But the lump sum payment would disappear the following year.

Union officials at JLR decided not to make any formal recommendation on the proposal. But bosses and union and the Solihull union committee said temporary losses at JLR justified the worse offer. That’s despite the fact that JLR made £14 billion profit between 2011 and 2018.

Workers rejected the new proposal 84 percent to 16 percent. JLR has now agreed to stick to the original deal and implement the agreed 12.4 percent pay rise. It sets the benchmark for pay rises throughout the country.

One worker at JLR Special Vehicles Operations in Coventry told Socialist Worker, “People are really disappointed with the union taking a neutral stance on this. It’s like the union works more with the company than it does with the membership.”

Workers were right to reject the new deal. If the company’s proposal had been accepted it would not only have costed JLR workers in the future.

It would have undermined every trade unionist—including fellow Unite members—fighting everywhere to keep pace with inflation. Jaguar workers are angry about that their union even contemplated rowing back from a deal. It shows “partnership” with employers offers nothing for workers.

Joy and radicalism ran through Northern Pride in Newcastle on Saturday—the first one since the beginning of the pandemic. This year’s thousands-strong Pride was organised under the banner, “Remember, resist, rise up,” to pay “homage to our collective history”.

It was led by a bloc of trans and non-binary people—to highlight that they are at the sharp end of the Tories’ and right’s attacks.

Workers brought union banners including from the Aslef train drivers’ union—which is due to strike on Saturday—and Unison, Unite, NEU and FBU. And some LGBT+ activists talked about bringing solidarity to the rail workers’ picket lines this week.

Some marchers weren’t happy that organisers had still invited corporations and the police onto Pride. Wren told Socialist Worker they’re “not a big fan of rainbow capitalism”, saying companies “drop it” after Pride month ends.

Marchers were angry at the attacks on trans people by Tory leadership candidates, including frontrunner Liz Truss. But there was also a determination to fight whoever succeeds Boris Johnson—and build a bigger, radical movement that fights for LGBT+ liberation.

Strike vote is right on the button

The result of a strike ballot was expected this week at YKK fastenings in Runcorn, north west England, where around 70 workers are battling over pay. Unite union members have been offered just a 5.2 percent rise that would see the lowest paid get only £9.54 per hour.

Scottish Qualifications Authority workers could strike, hitting the student appeals process. On an 85 percent turnout, 95 percent rejected the pay offer, with 84 percent saying they would strike.

The offer is worth as little as 1.7 percent, and a maximum of 4 percent. The Unite union is launching a formal strike ballot. Meanwhile Unison members at exam board AQA were set for a 72-hour walkout this week over pay.

Driving pay up at a Sainsbury’s depot

Around 200 HGV drivers at Sainsbury’s depot in Basingstoke have won a 12 percent pay rise. It’s above the present RPI rate of inflation.

The drivers, who deliver stock to stores across the region, voted by 92 percent in favour of the one-year deal.

Action off in Sandwell after vote

Refuse workers employed by outsourcer Serco on the Sandwell refuse collection contract have called off strikes after a new pay offer. Strikes were due to start next week.

With the threat of action, Serco made a revised offer of a 9 percent pay increase and an additional five days annual leave for many of the workforce. The revised offer was accepted by Unite union members.

The pay deal is better than Serco wanted, and shows the power of a strike threat. But it is still a pay cut and more could have been won by striking.

Call for strike in telecare ballot

The Unite union says bosses are making detrimental decisions without consultation. These include case call handling being outsourced to Newham council in May this year, allegedly on a temporary basis.

The revised offer was accepted by Unite union members, following a workplace meeting. The pay deal is better than Serco wanted, and shows the power of a strike threat. But it is still a pay cut and more could have been won by striking.