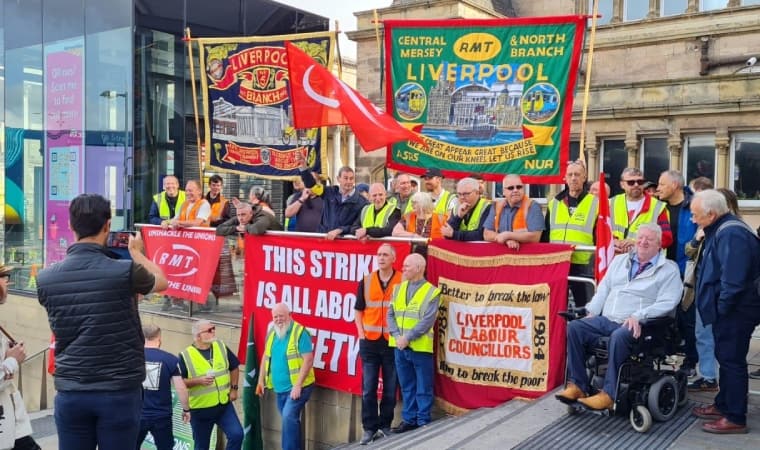 A big picket line for the RMT strike in Liverpool

Tens of thousands of railway workers took to picket lines across Britain on Wednesday. It marked the RMT union members’ fourth walkout against the Tories and cost of living crisis—and comes ahead of further action by rail and BT workers this week.

In Glasgow, hundreds later assembled outside the Network Rail offices in Glasgow, including members of the Unison, Unite, TSSA and the EIS education union. Placards read, “We refuse to be poor anymore,” and “Andrew Haines Network Rail CEO—£593,000. Station cleaner—£21,000.” Strikers marched chanting, “Victory to the RMT.”

At Edinburgh Waverley Station, more pickets assembled than during the last strike in June. They were joined by trade union activists, health workers and local government workers in the Unison union.

As chants and music flooded the area, one striker told Socialist Worker their anger was increasing. They said it’s especially “when people see what the directors are earning and they tell us there’s no money for a pay rise”.

Another striker said that the momentum is still there, but they could do with “more coordinated action”. They also expressed disgust at Keir Starmer and Labour’s unwillingness to support strikes.

Meanwhile, at Hastings station on the south coast of England, dozens mounted the picket line. RMT branch secretary Dean told Socialist Worker strikes are a “necessity” and rail workers are “leading the way” as the cost of living crisis deepens.

In Bristol, dozens joined the picket lines chanting, “What do we want? Protected jobs,” and, “Safety on the railway”. In Dundee, the UCU union showed their support and in Aberdeen pickets were joined by Unite union and trades council members.

Activists brought solidarity from French union CGT and the international transport union federation to London Bridge station in south London. At Upminster in east London RMT rep David told Socialist Worker, “We’ve got a lot of support from the public—the cost of living crisis is hitting us all.”

And in Lowestoft, Network Rail strikers were joined by the local Unite Community branch and the FBU firefighters’ union. One striker said, “We are striking for the whole working class, when we win it will encourage others.”

Dean, @RMTunion branch secretary for Tonbridge and Hastings, says the rail strikes are “leading the way” and that other unions balloting is “essential” as the #CostOfLivingCrisis deepens. #RMTstrikes #RMTSolidarity #RailStrikes #railstrike pic.twitter.com/sqGmzy1FzL

At the Holgate Works depot in York, workers raised an RMT flag on a company flag pole. Workers were livid at plans to reduce staff by one third and cut the number of skilled workers, and called for a week-long strike every month.

Many picket lines received support from train drivers in the Aslef union and managers in the TSSA union. In Coventry and Liverpool, Aslef members joined the picket line before their shift started.

Lively and angry picket lines assembled in Sheffield, Derby and Manchester, where they were joined by Unison and NEU members. More people joined the Wigan and Wolverhampton picket lines than last time.

In Chesterfield, workers held a large banner reading, “Pay justice now,” with a Trans pride flag while chanting, “Victory to the RMT.”

Keir, the RMT rep in Nottingham, told Socialist Worker, “We’ve had a cracking turn out and more importantly no one crossed the picket. We are continuing our fight for pay, terms and conditions. The RMT will not be broken, we have to fight.”