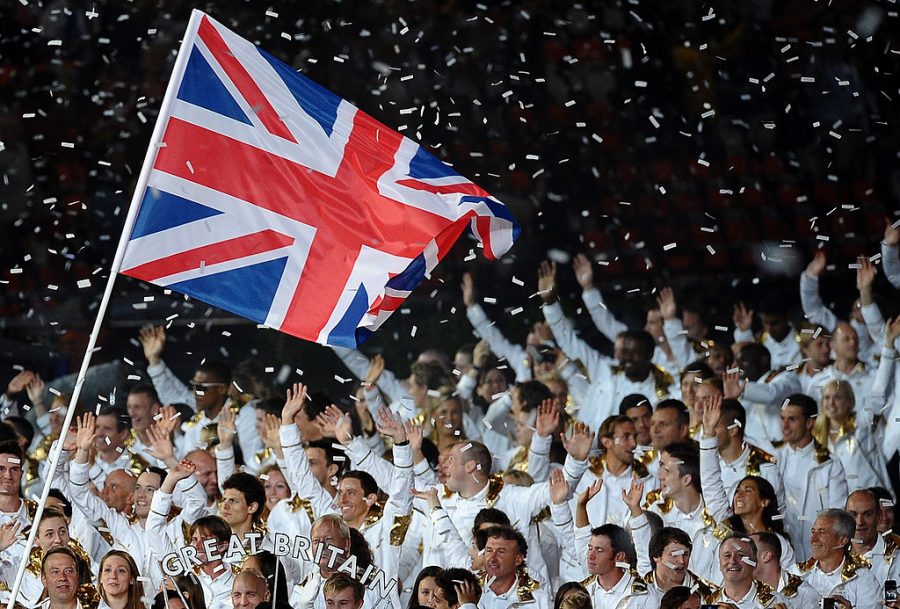 London’s 2012 Olympics opened a decade ago today. In the time since, the event has become a symbol for centrists of an ideal, progressive Britain that never really existed.

Chris Hoy of the Great Britain Olympic cycling team carries the flag during the Opening Ceremony of the London 2012 Olympic Games at the Olympic Stadium on 27 July 2012 in London, England. (Laurence Griffiths / Getty Images)

The silly season is now upon us and in post-hope contemporary Britain that can mean only one thing. Forget Hot Strike Summer or whatever the kids are calling it these days. As of the last few years, the final days of July in Burning Fascism Island are really all about the bacchanal of scarcely creditable liberal misremembering that is London 2012 Olympics Opening Ceremony Discourse.

How to make sense of this most d’Anconaian of modern fever dreams? Let’s start with the basics. Planned and co-ordinated by vaguely left-of-centre film director Danny Boyle, the opening ceremony of the third London Olympic Games—which took place exactly ten years ago this week—was in reality a fairly innocuous, not entirely unpleasant montage of English and/or British patriotism-lite.

In the course of its four long hours, the ceremony juxtaposed the Good (Blake’s ‘Jerusalem’, New Order’s ‘Blue Monday’, tributes to suffragism and the NHS), the Bad (Churchill, the Queen, J. K. Rowling), and the Ugly (Muse, Arctic Monkeys, rampant ‘choreography’), very much in the general style of a typical Boyle film. Think Trainspotting or Slumdog Millionaire, but without the laid-back class and identity tourism.

So far, so banal. But for many of our dear friends in the extreme liberal centre, the overture to London 2012 has over the last decade acquired the status of an almost literally Edenic event (a development that was, to some extent, foreshadowed at certain key moments in the ceremony itself, which featured clunky references to Milton’s Paradise Lost, as well as to John of Gaunt’s ‘This sceptred isle’ speech from Shakespeare’s Richard II).

For some liberal commentators recalling the opening ceremony this week, it was an occasion on which it had ‘never felt so good to be British’. Celebrity vicar Richard Coles remembered ‘watching the opening ceremony and thinking ‘we’ve cracked it—progressive, inclusive, outward looking, and everyone’s cheering’’. Meanwhile, a Guardian retrospective published this week argued that the ceremony foregrounded ‘Britain as a rich, diverse, multicultural, imaginative, inventive nation comfortable with its identity and capable of reconciling its contradictions.’

In fairness, there was indeed much that was worth celebrating about the 2012 Olympics. I moved to East London a few months before the opening ceremony, and can clearly recall how initial scepticism about the Games in this part of town (an entirely rational response to years of brutal ‘regeneration’ in and around Stratford) gradually gave way in early August to a gathering mood of civic euphoria.

No matter how much the term has been hollowed out over the years, multiculturalism in the broadest sense really is the best thing about London, and the Olympics really were an exhilarating showcase of it. As Jessica Ennis-Hill and Bradley Wiggins gatecrashed a secret Stone Roses gig in Hoxton, and as Usain Bolt casually crossed over into superhero territory while Jamaica flags decked the streets of Leyton and Walthamstow, like many others I found myself thinking—for what ultimately turned out to be a fleeting moment—that Britain might not be such a terrible place to live after all.

And yet it is vital to put such utopic epiphanies—which modernist sporting events like the Olympics will probably always be capable of conjuring—into cold historical perspective. Despite the internationalism of the Games themselves, which seemed to briefly enliven and inspire their surroundings, they notoriously left very little in the way of a positive civic legacy in East London.

To say nothing of the negative part played by the Stratford developments in accelerating processes of gentrification and exploitative housing in this part of the capital, the largely aesthetic multiculturalism of the summer of 2012 was clearly a blip rather than a more decisive progressive turning point. With the racism which helped to spark the 2011 London riots on one side, and continuing institutionalised prejudice against London’s BAME communities on the other, the apparently ‘progressive, inclusive, outward looking’ moment of 2012 was not especially grounded in any meaningful material reality.

Away from debates about the specifics of their legacy, the idea that the 2012 Olympics and their opening ceremony marked a ‘never had it so good’ cultural apogee for modern Britain must be seen for what it really is: a profoundly damaging delusion, which, in its dialectic with another great liberal climacteric of recent times (Brexit) is helping to impede the development of a coherent reformist response to the right-wing unpicking of Britain’s social fabric over the last decade or so.

Indeed, the ongoing liberal myth of London 2012 shows why a ‘progressive alliance’ with any kind of radical intent is likely to be hampered by the inability of centrists to grasp some basic truths about the sort of country Britain was—and is—in the first quarter of the twenty-first century.

This side of terminal Toryism, perhaps the great dividing line in British politics right now is between those who think the biggest disaster of the 2010s was austerity and those who think it was the 2016 Brexit referendum. Of course, these two very different epiphenomena have to be approached in nuanced ways (it is not always a case of either/or). But on the whole, it makes sense to think about two vast tribes on the modern centre-to-left who go their separate ways on the question of austerity vs. Brexit.

The first tribe comprises much of the country under the age of about 45. Its members are radically inclined (if not always socialist per se). They tend to view recent British history as a time of rapidly declining living standards and sociological hollowing, of which 2010s austerity—responsible, in some estimates, for 130,000 actual deaths—was merely the cruellest, most extreme example. Although they mostly voted Remain in 2016 and were disappointed by the outcome of the referendum, Brexit is pretty low down on their list of priorities for obvious reasons.

The second tribe comprises much of (capital L, capital B) Liberal Britain. Its members go in fear of ‘ideology’, preferring vaguer notions of ‘fairness’, ‘decency’, ‘pragmatism’, ‘common sense’ and so on, though in some cases they still cling to the radical cultural touchstones of their youth (especially as far as pop music is concerned).

While Brexit was nothing short of a national cataclysm for this demographic, they were mostly not too bothered about austerity in all but the most abstract sense, largely because they were insulated from it through being slightly older, more middle-class, and—crucially—in possession of property when austerity first began to bite in 2010.

In order for the myth of Brexit-as-historic-apocalypse to function for the latter tribe, there has to be a corresponding sense that Britain was undergoing a rare golden age in the years leading up to 2016. In the absence of anything better, the London 2012 fandango has come to fill that hole (even as centrists seem to have wiped from memory the fact that it occurred at the nadir of austerity, with foodbanks beginning to sprout all over the country).

In their immensely overdetermined meaning and their tangential relationship with the actual structural processes of recent socio-economic decline, these cornerstones of the modern liberal imaginary are as absurdly hyperbolised as they are detrimental to the fate of political reform in Britain in the 2020s and beyond.

And so, perhaps, if we are to have any kind of a radical future, socialists will have to make a bold, uncompromising claim this summer and in the years to come. This is that in fact, in all the ways that matter, and with due respect to Jean Baudrillard, the London 2012 Olympics Opening Ceremony did not really take place.