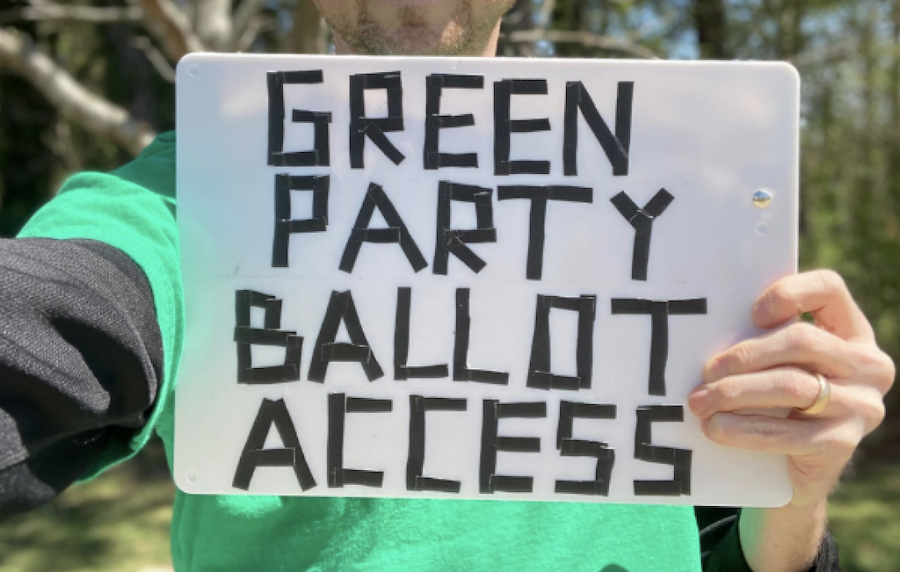 The Democratic Party is trying to deny the Green Party access to the ballot in North Carolina. I’m not a Green Party supporter, but I’m a plaintiff in a lawsuit fighting back, because Democrats are trying to stamp out democracy in my state.

Back in April, as I strolled through Bond Park in Cary, North Carolina, admiring the baubles and kitsch on display at the local spring arts and crafts festival, I noticed a man with a clipboard collecting signatures. Having been the man with the clipboard in the past, I decided I would save him the trouble of approaching me and go to him. He said he was with the Green Party, and politely requested that I help them get ballot access for the midterm elections.

Despite some of the weirdness I have experienced from Green supporters before, I bear them no ill will. More importantly, I don’t believe that being a little kooky should limit your access to democratic institutions. Thinking nothing of it, I gave him my signature and went back to pushing my son’s stroller. Hours later I noticed he was still at it, standing in the sweltering Southern springtime heat asking strangers for their signature while I enjoyed some brews in the shade. I admired his hustle.

When I innocuously signed that petition, I could not have imagined that three months later I would be drafting a declaration that would be used in a legal complaint against the North Carolina State Board of Elections. But here we are, and I’m in shock. I’m shocked not only by how difficult it is for third parties to get ballot access in the United States, but also by the events that unfolded next, demonstrating the lengths to which the political establishment will go in order to block that access.

On June 25, 2022, the day after the historic Roe v. Wade decision was overturned by the Supreme Court, I received a text message from an individual who identified himself only as Drew. He texted to ask me to remove my name from the petition that I signed. Drew was concerned that if the Green Party candidates were allowed on the ballot they would take votes away from the Democrats in what he assured me was an election where too much was at stake.

Having heard that for just about every election in my lifetime, I was unconvinced and refused to remove my name. Thinking the ordeal was over, I went about my day. The next day, a young woman came to my door claiming to represent the State Board of Elections. She gave the same spiel as Drew, qualifying her argument by claiming to be nonpartisan — which on its face is a spurious statement from someone worried about splitting the Democratic vote.

I responded again that I would not be removing my name from the petition. She tried a few more times to secure my compliance, but I continued to decline. My incredulity mounting, I asked her why the Democrats were concerned about the Green Party in the first place. In North Carolina, Greens won .2 percent of the vote in 2020. Chasing down people who signed a petition to allow ballot access to a party that took one-fifth of 1 percent of the vote in a general election seems like an incredible waste of time and resources.

But if nothing else, this squandering of money and man power speaks to the combination of the Democrats’ desperation and their lack of political strategy. The party is heading into the midterms on the heels of the recent Roe reversal, amid rapid inflation, and facing an impending economic recession. Having seemingly given up on its flawed but nevertheless robust Build Back Better plan, the Biden administration continues to rest on the same laurels that got the president across the finish line in the first place: he is not Donald Trump. But the distinction may not be enough to secure reelection: a recent opinion poll has Biden sitting at 1 percent below Trump on his worst days.

Despite the gravity of this situation, the Democratic Party seems committed to inaction on every front — tepid doesn’t even begin to describe the party’s response to the nation’s crises. Without even a milquetoast program, the Democrats are reduced to petty electoral games, like disenfranchising a marginal slice of the electorate.

I say all of this not as a staunch supporter of the Green Party or their candidate for Senate in North Carolina, Matthew Hoh, but as someone who believes in the need for a party independent of either Democrats or Republicans — one that boldly and effectively advances the interests of the broad working class. Such an organization will not materialize out of nowhere, nor do I think the Greens are that organization. But if the United States is to ever see a party that explicitly prioritizes the interests of the vast working-class majority over the tiny wealthy minority, that will require securing ballot access outside the bipartisan establishment. We need to create as much room to maneuver in the electoral sphere as possible.

Broadening the scope of American democracy should be our aim — and this is why, whatever our political differences, I lend my voice against attempts to disenfranchise Hoh and the Greens. Hoh is right when he says, “This case will determine whether the political establishment can abuse its power to stop another party from participating in elections.”

One major difference I have with the Greens is my belief that contesting elections is not enough to build an organized and class-conscious constituency for an effective third party. We also need to organize workers as workers, and support worker-led organizing efforts that are already underway. The union drives at Amazon and Starbucks are proof that great things can be accomplished from the grass roots. And the victories workers secure through collective action can extend far beyond the workplace. They can illustrate the power workers have when they stand together — power that in the long run can permit them to put their thumbs on the proverbial political scale.

When it comes time for political action, where will those empowered workers go? Will they go to the Democratic Party — a party that pays lip service to pro-worker legislation, even though it actively participated in the evisceration of social programs and dismantling of the labor movement over the last half-century? Or will workers choose to go it alone? If we don’t defend the right of third parties to exist, they won’t have a choice.