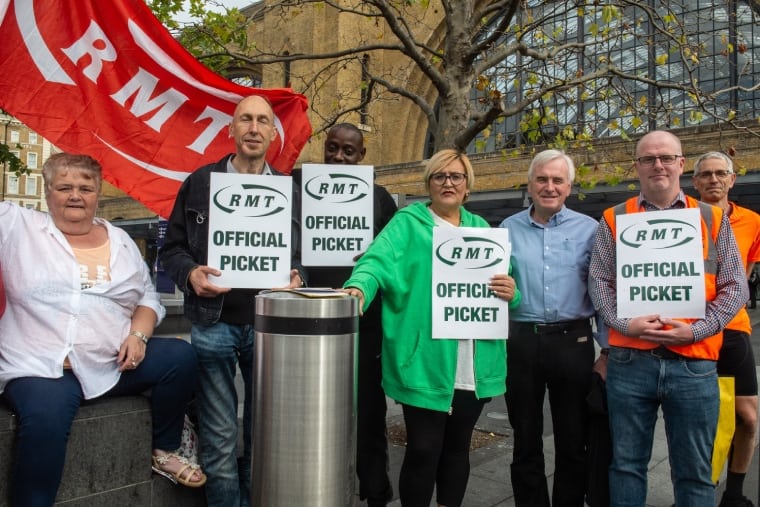 The intention was not really to substitute for strikers—an impossible task. Instead, it was to give a signal that they were ready to use the scab labour laws recently rushed through by the Tories. And any other anti-union laws they implement in the future.

The Network Rail managed stations overview for Wednesday’s strike day in London is a strikebreakers’ charter. A rail worker gave it to us, and it details how staff can be moved around to give the impression that a service is still taking place.

For example, it details how at Waterloo one group of station workers was expected to strike in large numbers. So “surplus resources at LB [London Bridge] may be moved to support last services if passenger suppression is not as effective as last time”.

But at Clapham Junction, the plan was for “additional agency booked to support passengers and implement a one way system if needed. There will be high visibility.”

Meanwhile, at Euston the Network Rail document said “additional agency booked for crowd control and response teams. Staff to be positioned in key positions around the station.”

There were to be “additional agency in place” at St Pancras and “10 contingent staff in place along with 2 x STM Agency staff” at Liverpool Street. STM is a contractor that says it specialises in “union relationship management” and “corporate social responsibility and social value”.

The revelations come despite rail workers warning that the drive to using agency staff threatens safety.

During the first set of RMT union strikes, stand-in staff sent multiple trains in the wrong direction. Others told trains to leave stations when signals were on red. These could have caused deaths.

Talking of Wednesday’s manoeuvres, an RMT union member told Socialist Worker, “The strike was hugely effective. These sorts of schemes don’t go anywhere. But they let management have a fantasy of going round the strikers and breaking our will.

“They also are a hat-tip to the government that says thank you for that law and can we have some more please. They won’t have long to wait if the Tory leadership debates are anything to go by.”

Liz Truss is the bookmakers’ favourite to be the next prime minister. She has already said she would legislate for “minimum service levels” on a range of industries in the first 30 days of government if she wins.

The new law proposed by Truss would potentially restrict strikes by transport workers, teachers, postal workers, energy sector and others. She has also pledged to ban strikes unless 50 percent of all those balloted vote for them—the present figure is 40 percent. And the union would have to give four weeks’ notice of a strike, double the present limit.

Transport secretary Grant Shapps had gone further. In an article in the Telegraph newspaper he came up with 16 anti-union measures. These include “banning strikes by different unions in the same workplace within a set period”. This is all naked class legislation, bosses’ law designed to shore up profit and power.

But whether it’s the use of agency workers or more laws, the Tories rely on the lack of response from union leaders. As the Tories attack, we need more strikes, more mass picketing, more defiance, more solidarity and more refusal to be held down by bosses’ laws.