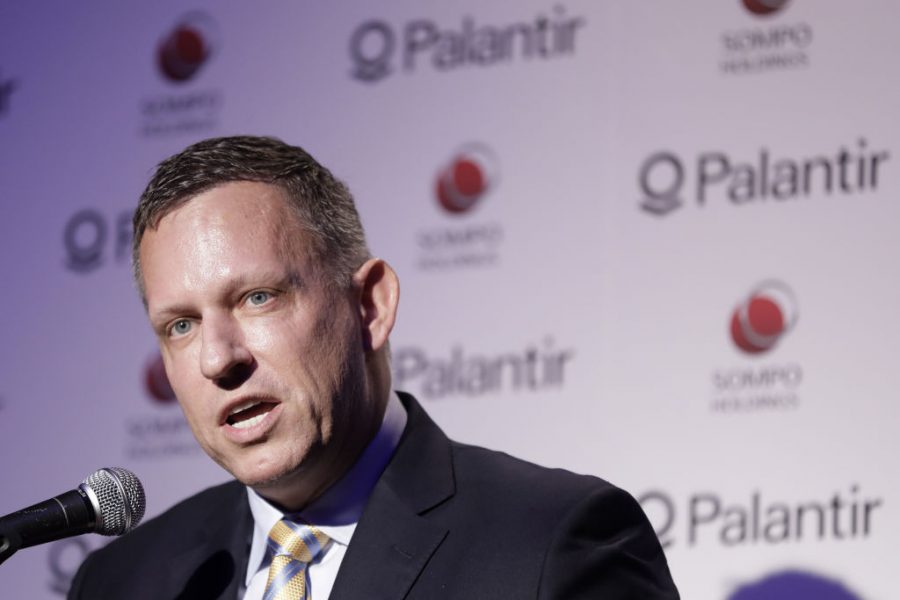 In his book The Contrarian: Peter Thiel and Silicon Valley’s Pursuit of Power, Max Chafkin hones in on college-aged Thiel’s great love of speed chess. At Stanford, Thiel would go to the student union, the Coffee House, and “sit there for hours, playing dozens of consecutive five-minute games, absorbing the lessons of the intense, cerebral sport.”

One day, in Chafkin’s account, Thiel gave some friends a ride to a chess tournament. He drove like a maniac down Route 17, a four-lane highway that crosses the Santa Cruz Mountains, weaving in and out of traffic, flooring the accelerator, and barely avoiding collisions. When the California Highway Patrol finally pulled him over, Thiel told the cop that speed limits are an “infringement on liberty” and quite possibly unconstitutional. The cop decided to let him off with a warning.

In other contexts, his commitment to “liberty” seems to have been a lot more flexible. Some of his classmates at Stanford recalled Thiel, whose family had lived in South Africa in the 1970s, defending apartheid on the basis that “it works” — i.e. that South Africa had a higher level of economic development than its neighbors, rendering irrelevant any moral hand-wringing about the country’s human rights abuses.

The picture of young Thiel that emerges in the early chapters of The Contrarian corresponds to the way many people perceive Thiel now that he’s a fifty-four-year-old billionaire who lavishes resources on extreme right-wing candidates in races around the country.

The chess, the ultra-reactionary political opinions, the relatively obscure intellectual influences (he was a devotee of René Girard), and the bold refusal to recognize the authority of traffic laws combine to make these chapters feel like the installment of a comic book where we read about the supervillain’s backstory. “The concept for my doomsday device, Mr Kent, first blossomed in my mind when I was at the Coffee House at Stanford. My game of speed chess was interrupted by some starry-eyed student activist trying to get me to sign a petition for the university to divest from South Africa…”

Thiel’s own vision of the world and his place in it seems modeled less after a comic book than a classic science fiction novel. One of his most iconic statements is that “we were promised flying cars and we got 140 characters.” He’s noisily promoted “seasteading” — basically, building libertarian colonies on the ocean — as a way of avoiding taxation and regulation. He’s expressed interest in a life-extension technique involving blood transfusions from younger donors. The “parabiosis stuff,” he told one reporter, is “really interesting.” While clarifying that he hadn’t done so, he seemed to go out of his way to say that he’d considered incorporating it into his own health regimen.

It’s worth taking a beat to really think about that last item. Peter Thiel wants you to think that he might be injecting himself with the blood of the young.

It’s tempting to speak of Thiel as an evil genius, but we should be wary of taking the persona he’s crafted at face value. The man knows what he’s doing. One of the most revealing sentences in The Contrarian is a quote from a conversation Thiel had with an anonymous friend about Thiel’s surveillance business, Palantir. Forbes had published a cover story about Palantir under the headline “Meet Big Brother.” Civil libertarians were alarmed.

Thiel shrugged it off, telling his friend, “I’d rather be seen as evil than incompetent.”

A Supervillain or a Bullshit Artist?

The Contrarian is at its best when Chafkin is poking holes in Thiel’s self-branding. For example, Thiel and his associates encouraged the idea that Palantir’s technology was crucial to the operation to kill Osama bin Laden. The party line at the company was, with a wink and a nod, that they weren’t at liberty to disclose any details — but they could perhaps encourage people to Google the phrase “Palantir bin Laden.” One source actually familiar with the nitty-gritty details told Chafkin that Palantir didn’t really do much to analyze raw information; it was “more of a visualization aid.”

The book is at its weakest when Chafkin takes the Mysterious Evil Genius branding seriously, presenting the contradictions in Thiel’s alleged ideology as interesting enigmas rather than signs that he’s spewing superficially edgy-sounding nonsense to trigger the libs and cultivate his own persona. Thiel wants us to think he’s operating on a master plan rooted in a deep commitment to some secretive but ideologically consistent vision, but that portrayal doesn’t line up with reality.

Thiel has often claimed to be a “libertarian” but he spent the Bush years securing government contracts for Palantir and complaining that, even at the height of the “war on terror,” the government was too squeamish about privacy. He’s recently emerged as the primary billionaire sugar daddy for a whole crop of alleged “populists” like Josh Hawley, Blake Masters, and J. D. Vance, who talk a big (albeit empty) game about helping working-class people — but in 2012, just one decade prior, he went in on Ron Paul’s campaign, with its emphasis on eviscerating social programs and leaving everything up to the free market.

In other words, Thiel is all over the place. He’s also questionably effective: Thiel was a member of Trump’s transition team, but it seems his role entirely consisted of suggesting the names of obscure right-wing eccentrics for various jobs and being shot down by Trump’s people. (Thiel loves obscure right-wing eccentrics; see his patronage of self-described “monarchist” weirdo Curtis Yarvin.)

Thiel’s political history lacks overall ideological coherence, but there are some through lines. He thinks he personally should make more money, pay less in taxes, and get more government contracts. On a grander scale, he wants government to generally be more servile to the interests of the wealthy. Whatever else they disagree about, pretty much every commentator or politician Thiel has sponsored is on board with that.

To be clear, that agenda is terrible for our society. Every step in the direction of fulfilling these policy preferences makes economic inequality worse, ecological destruction more severe, and the world around us less livable. But these aren’t exactly unusual preferences for a man with Thiel’s wealth. They’re not evil genius ideas. They’re just run-of-the-mill rich guy ideas.

How to Write About the Right

A few years ago, Nathan Robinson wrote an article for Current Affairs titled “Two Ways of Responding to Conservatives.” He contrasted articles about the then ascendant Jordan Peterson that did little more than express alarm about him with one that calmly demolished Peterson’s specious arguments.

Talking about the first kind of article, Robinson pointed out that “calling someone a brilliant, dangerous maverick” is a bad way of reducing their appeal. “Here is one of my tests,” Robinson wrote, “for whether a criticism is going to be powerful: Does it reinforce the person’s self-conception or undermine it?”

Applying Robinson’s test to portrayals of Thiel requires us to ask whether portraying him as an all-powerful puppet master who probably keeps a well-thumbed copy of Mein Kampf under his pillow does more to reinforce or undermine the kind of image he’s going for when he patronizes Yarvin, talks about blood transfusions, and publicly muses that everything started to go wrong when women were allowed to vote. (Really.)

A better way to talk about Thiel is to point out the deep absurdity of a billionaire bankrolling politician after politician who claims to be a “populist.” If these people were actually interested in helping the populace resist the influence of elites, or perhaps even take away some of the elites’ hoarded wealth to help everyone else, why on earth would Thiel be devoting a chunk of his hoarded wealth to electing them?

A glance at most of these guys’ campaign websites shows that they’re about as “populist” as Gordon Gekko. J. D. Vance, for example, is against universal childcare, against universal healthcare, and even against raising the minimum wage. His “populism” begins and ends with pointing out the existence of deindustrialization and the opioid crisis — without, mind you, clearly articulating a solution to either one — and making some noises about “the establishment” failing ordinary people. Hawley and Masters aren’t much different.

I don’t doubt that all of these people will be reliable votes in the future for various pieces of cruel social legislation to make life harder for gay and trans people, pregnant women, and other vulnerable groups. They’ll do this not to implement some master plan to turn America into a fascist state cooked up by Thiel (himself a married gay man) but because it’s a cheap way of whipping up the conservative side of the culture war and distracting attention from the nothing they plan to do to meet the material needs of their constituents.

Thiel is dangerous — not because he’s an evil mastermind, but because he’s a billionaire who enjoys playing with our politics and he couldn’t care less about the people who get hurt in the process. The real takeaway here is strikingly simple. No halfway decent society would allow concentrated wealth to metastasize to the point where Peter Thiels were possible.