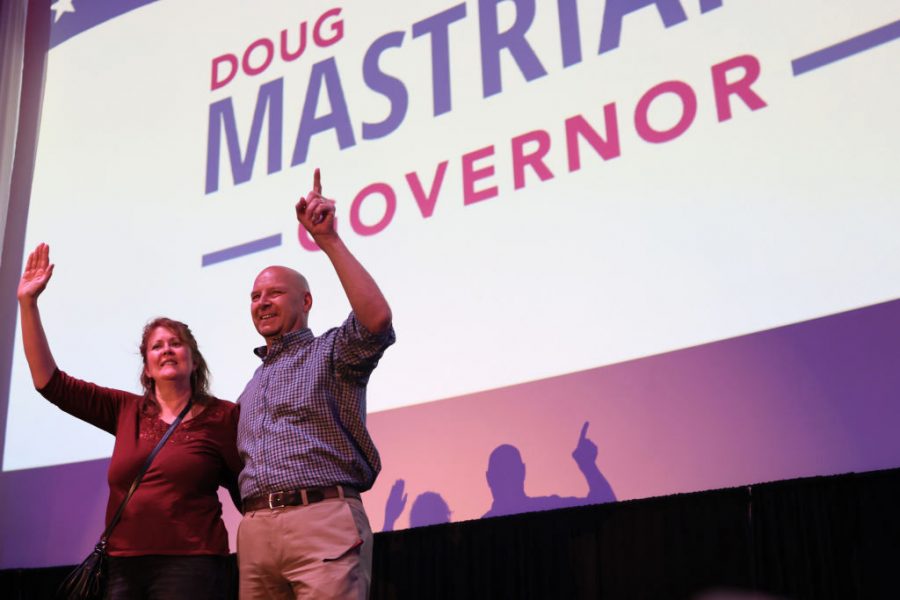 As they do their best to keep the Left weak, Democrats have spent more than $40 million in 2022 to support far-right Republican candidates.

Pennsylvania Republican gubernatorial candidate Doug Mastriano and his wife wave to the crowd during a campaign rally on May 14, 2022 in Warminster, Pennsylvania. (Michael M. Santiago / Getty Images)

If you don’t follow Pennsylvania politics, you might not be familiar with Doug Mastriano, the state senator who clinched the Republican nomination for governor in May. Mastriano’s profile rose in far-right circles when he became one of the leaders of the Pennsylvania “stop the steal” movement. Mastriano helped organize large rallies in the state to agitate for false claims of election fraud, chartered buses to take protesters to the Capitol on January 6, crossed police barricades at the Capitol himself during the riot, and attempted to submit “alternate” (i.e. fake) pro-Trump electors to the official count. He was even invited to the White House to discuss the “stop the steal” strategy with Donald Trump.

If Mastriano wins the Pennsylvania general election this November, he will choose the secretary of state — the official in charge of administering the 2024 presidential election in a state where Trump lost by less than one percent in 2020. Mastriano himself is well aware of this. He has said that as governor he would decertify voting machines in some precincts (making it hard to count votes there), and he has alluded to the independent state legislature doctrine, which holds that state legislatures can name whoever they want as the recipient of a state’s electoral votes, regardless of who voters select.

The notion that Trump was the real winner of the 2020 presidential election is hardly Mastriano’s only fringe position. Mastriano has called the separation of church and state “a myth,” and promoted the QAnon conspiracy theory that Democrats run a secret child trafficking ring dozens of times. He wants to make abortion illegal in all cases, even when carrying a pregnancy to term could kill the mother.

Given Mastriano’s dangerous views, you might be surprised to learn that among his backers is the Pennsylvania Democratic Party, which sent direct mail supporting him. But an even bigger Mastriano supporter was his opponent in the general election, Democratic nominee Josh Shapiro. Shapiro spent $840,000 on pro-Mastriano television advertisements during the primary, more than twice what Mastriano spent himself.

Pennsylvania Democrats aren’t alone in funding far-right extremists. As the campaign finance website OpenSecrets reported, Democratic Illinois governor J. B. Pritzker, along with the Democratic Governors Association, spent an astonishing $35 million on advertisements supporting far-right Trump endorsee Darren Bailey and attacking a relatively moderate rival in the Republican primary. Similar to Pennsylvania, the Democrats spent far more boosting Bailey than the candidate did himself. And just like in Pennsylvania, it worked; Bailey won.

Democrats had similar success in Maryland, and they are attempting the same gambit in Arizona. OpenSecrets notes that they also boosted far-right candidates in California and Colorado, though they were unsuccessful in those two states.

Advocates for funding these far-right — and frankly unhinged — candidates argue that they will be easier for Democrats to defeat in the general election than more moderate Republicans, which is why it makes sense to spend resources ensuring they are the GOP nominees. But the risks are simply too high. Even if all the bets pay off and candidates like Mastriano don’t end up in control of a key swing state’s election system, it is simply wrong to strengthen the far right on principle. When Democrats help a far-right candidate win an election, they are, by definition, increasing the far right’s popularity, and giving particularly odious and dangerous candidates more airplay, resources, and legitimacy.

When we combine this risky tactic with a Democratic establishment continually tilting the scales against leftist and progressive candidates in their own party’s primaries, an even more cynical picture emerges. The juxtaposition reveals a party core whose only real remaining strength is raising money from the rich. The people who control the Democratic Party have no ideas to run on, and they refuse to embrace the extremely popular ideas put forth by some of the party’s most passionate elected officials. Their only strategy is to try to game the system.

It is almost exclusively the party’s left flank — meaning Bernie Sanders and the “Squad,” making up about half a dozen leftist representatives in the House — who develop and propose new ideas that actually appeal to voters. To the small extent that the centrist wing of the party proposes anything, which it does only grudgingly, it typically offers nothing but watered down, needlessly complex versions of more popular proposals developed by the Left.

Yet not only has the Democratic establishment dangerously boosted the far right’s message with the party’s resources, it has also dedicated resources to ensuring that its most energetic and proactive wing remains small and powerless.

The most glaring recent example of this was congressional leadership’s all-out support for Henry Cuellar, one of the most socially conservative and pro-corporate Democrats in Congress. Even as the prospect of the reversal of Roe v. Wade grew ever more real, and even as the FBI raided Cuellar’s home, Nancy Pelosi and other top officials vociferously supported anti-choice Cuellar against a popular pro-choice progressive, Jessica Cisneros. Key players in the party’s complex web of fundraising organizations also threw in for Cuellar.

As David Sirota reported, this dynamic has repeated itself in federal races across the country, from Oregon and Ohio to Pennsylvania and North Carolina. Top Democrats seemed especially keen to ensure that Bernie Sanders ally Nina Turner lost her bid for Congress, an effort toward which they received at least $1.5 million in advertising from the American Israel Public Affairs Committee (AIPAC), the pro-Israel group with close ties to many senior Democratic officials.

Nor is it simply a matter of elected officials defending their incumbent colleagues. These same officials like Pelosi and senior South Carolina congressman Jim Clyburn are noticeably absent when incumbents like Squad member Rashida Tlaib and the relatively progressive Andy Levin face opponents heavily funded by AIPAC. Pelosi and Clyburn are joined by ambitious junior representatives like Hakeem Jeffries, the New York congressman who seems to be motivated as much by coming up with increasingly obnoxious ways to taunt progressives as defending incumbents.

The United States was dangerously close to a right-wing coup in 2021, many of the details of which have only recently come to light thanks to Democrat-led Congressional hearings. But even as the Right continues to lay the legal and logistical groundwork to try something similar in 2024, Democratic officials focus on stopping popular figures on the Left and heavily supporting the most pro-Trump authoritarian elements of the Right. The Democratic Party doesn’t look like a party serious about stopping the country’s growing antidemocratic forces. It looks like a party that stands for nothing except making the next big score.