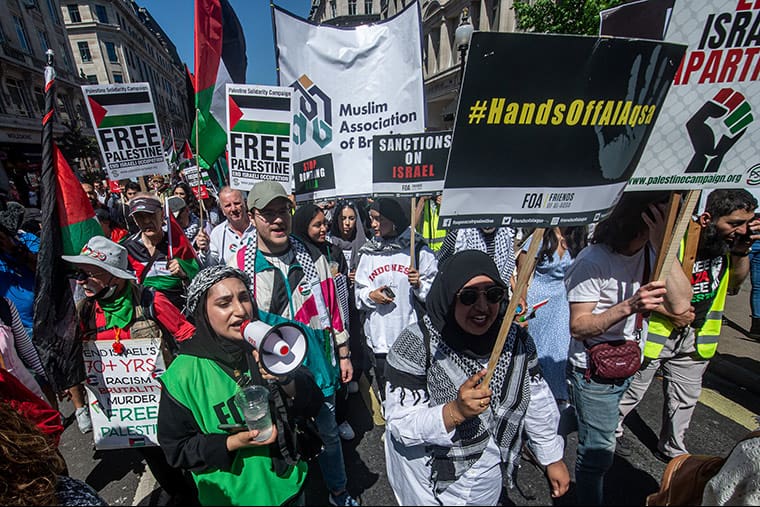 Palestine is treated differently to Ukraine by Tony Blair and his followers (Picture: Guy Smallman)

The government used war criminal Tony Blair’s organisation to tackle what it said was “extremism” in schools in the wake of the Russian invasion of Ukraine.

The Tony Blair Institute for Global Change produced resources for the Department for Education to help teachers and pupils “avoid misinformation” about the war.

This drive was linked to the Educate Against Hate website. The Tories set it up in 2016 to bolster “counter-extremism” and help schools implement the Prevent duty—which forces teachers to spy on Muslims for signs of radicalisation.

The Prevent programme was first brought in under Blair’s Labour government at the height of the War on Terror, then made a legal duty on public sector workers in 2016.

His group produced a “briefing note on religious extremism” and another on “facilitating difficult dialogue”.

Its role was highlighted in a survey by the Cage human rights organisation on the stark difference between schools’ approach to Ukraine and Palestine.

Some 92 percent of respondents said their school had “proactive engagement” on Ukraine, including holding non-uniform days, activities, donation appeals or acknowledgements in newsletters.

And, 62 percent of respondents said their school had fundraised or hosted donation drives for Ukraine.

In a small number of cases, schools raised money for military gear through the Association of Ukrainians in Great Britain (AUGB).

The AUGB, set up after the Second World War, has become a mainstream organisation. But it continues to glorify Stepan Bandera—the Nazi collaborator and antisemite—as a Ukrainian “hero”. His Organisation of Ukrainian Nationalists was responsible for the murder of tens of thousands of Ukrainian Jews and Poles.

The Ukrainian state named Bandera a “Hero” in 2010 as part of its drive to ramp up right wing nationalism.

Meanwhile, earlier this month the High Court ruled that schools could clamp down on Palestine solidarity.

A judge blocked Cage’s legal challenge in response to former Tory education secretary Gavin Williamson’s letter to heads during Israel’s assaults in Sheikh Jarrah. It said there had been an “increased focus on the Israeli-Palestinian conflict in many schools” and claimed it related to a “worrying spike in antisemitic incidents”.

One respondent to the survey said their daughter’s school “deflected questions” over Palestine. “They didn’t give students the answers they were looking for when asked why funds were being raised for Ukraine and they weren’t even allowed to wear badges for Palestine,” they said.

“The only time where they directly spoke about Palestine was in an email about a year ago and it was discouraging any efforts to raise funds.

“The double standards are uncanny.”