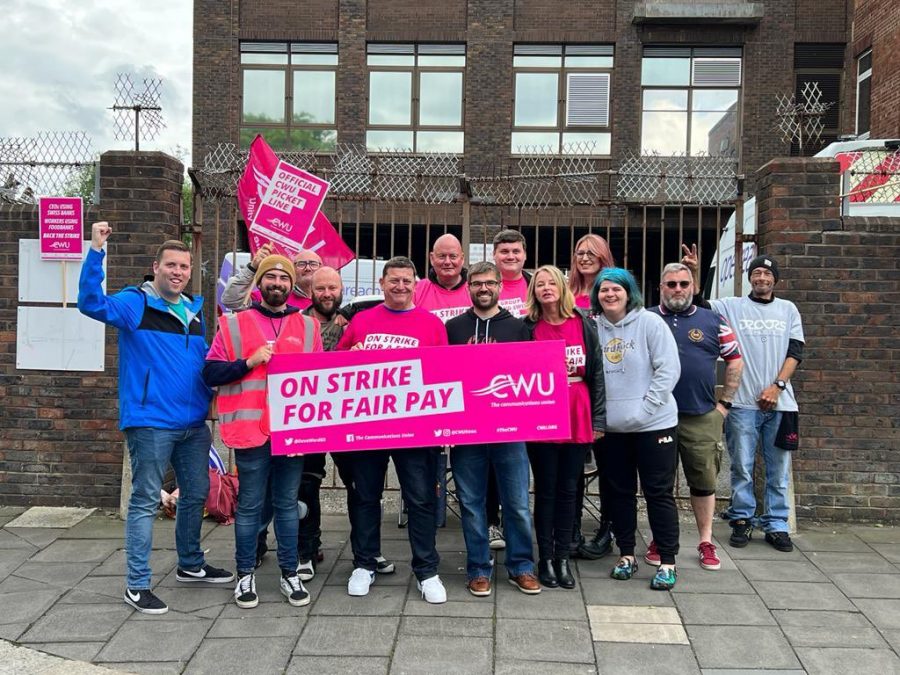 On Monday morning this week, Communication Workers Union (CWU) member Pete Francis had a phone call from an ex-colleague at BT. The team member on the other end told Pete he’d had his access revoked to work areas in the BT Tower, where he also works. Pete thought it might just be a rumour, but when he tried to go in later that day he found that the team member was right—his access no longer worked.

The same thing had happened, he quickly discovered, to another colleague from the same branch. Four days later, there’s still no explanation—no official word from the company at all, in fact—and no access.

‘I find it quite deplorable that management must have spread it around to other team members to say that, even though it’s my workplace,’ he tells Tribune, gesturing up at the iconic tower he’s currently picketing. ‘And it’s strange that it happened on Monday, just a few days before the industrial action started.’

Pete has worked with BT for 37 years, and he explains that these tactics aren’t out of step with the broader approach of management toward workers and their union representatives. There is a culture, he says, of people being ‘singled out here,’ adding that ‘it’s not a nice place to be when that happens. Workers are worried that if they’re seen at the picket, for example, they’ll be picked on.’

Intimidation like that makes the CWU’s achievement in organising BT workers this year only more impressive. More than 90 percent of Openreach engineer and BT call centre members voted for industrial action in June, and 40,000 are striking today, with another 24-hour walkout planned for Monday.

What’s more, general secretary Dave Ward points out, is that most of the workers now on strike are not based in big workplaces, but are isolated, working either from home or in vans. ‘So to get a result like that,’ Dave explains, standing on the pavement across the road from the picket line, ‘tells me that there’s no worker in the UK that’s unreachable.’

Workers are striking against a pay rise imposed by BT—not negotiated, Dave emphasises—of just £1,500, equivalent to about 4.8 percent for an average worker, against inflation expected to top 11. BT CEO Philip Jansen, meanwhile, increased his earnings last year by 32 percent, while call centres were reported to be opening up in-workplace food banks—justified by BT as a ‘community pantry’—for staff members to use. Despite that, Dave says of Jansen, ‘the guy’s got the arrogance to sit in his office and refuse to get his hands dirty and refuse to even negotiate at all. It’s unacceptable.’

The attitude of management has, predictably, created an atmosphere among workers in which morale towards BT and Openreach is the lowest it’s ever been, according to Pete. ‘I’ve seen some low ebbs, but we haven’t been on strike for 35 years, and that sums up where we are. We’ve never had to resort to this. We’ve always been able to negotiate and come to a solution.’

‘This is a company that made £1.3 billion in profit last year, and they’ve just posted that in the first quarter of this year another £400 million,’ Dave continues. ‘They gave £750 million to the shareholders. They can afford a proper pay rise, so it’s not a dispute about affordability. It’s a dispute about people like Jansen and their boards ripping off workers and also ripping off customers.’

For Dave, this is a key point. Alongside its quarterly profits, BT also announced plans this week to hike broadband costs for customers by 13 percent from January, joining other costs like food and fuel in an unrelenting upward spiral. Energy bills alone are now predicted to reach £3,500 by the end of 2022 while energy companies post record profits—a figure, Pete points out, that simply isn’t viable for workers, like those he represents, sometimes earning around £20,000 a year. Anger for rising prices and falling wages brings together both workers and customers—and goes far beyond BT.

‘Over the last six months we’ve seen a real shift among working people—and I don’t just mean the lower-paid,’ he says. ‘People are seeing those like Philip Jansen getting a 32 percent pay rise, but that’s not just BT, it’s everywhere. And I think people are really, really fed up with the right wing press and the way they portray things, telling blatant lies. They’ve been hit in the pocket, and now they’re seeing through it.’

Amid that change, trade unions like the CWU are proving themselves the primary fighting force for people in this country facing a crisis of living standards not seen since records began—particularly since, as Dave puts it, political parties have ‘left the field’. On the picket line, pink flags waving in a summer breeze, cautious optimism in the face of such hostility seems buoyed by the strength and popularity of recent action taken or being planned by workers in other sectors and cities across the country, from transport to healthcare to law and beyond.

‘I think it’s time, now, not just to talk about coordinating action, but to come up with plans for innovative forms of action that all workers, whether they’re in a union or not, can participate in,’ Dave says. ‘For me, this is bigger than the summer of discontent—this is really a change in views. I think we can build a very strong movement, now.’

BT insist that the current pay rise will not be opened up for negotiation; Dave says that this intransigence will only result in more resistance. As the cost of living crisis spirals, something, it seems, has got to give. If the solidarity displayed on picket lines throughout the country in recent weeks is anything to go by, it’s not going to be the workers.