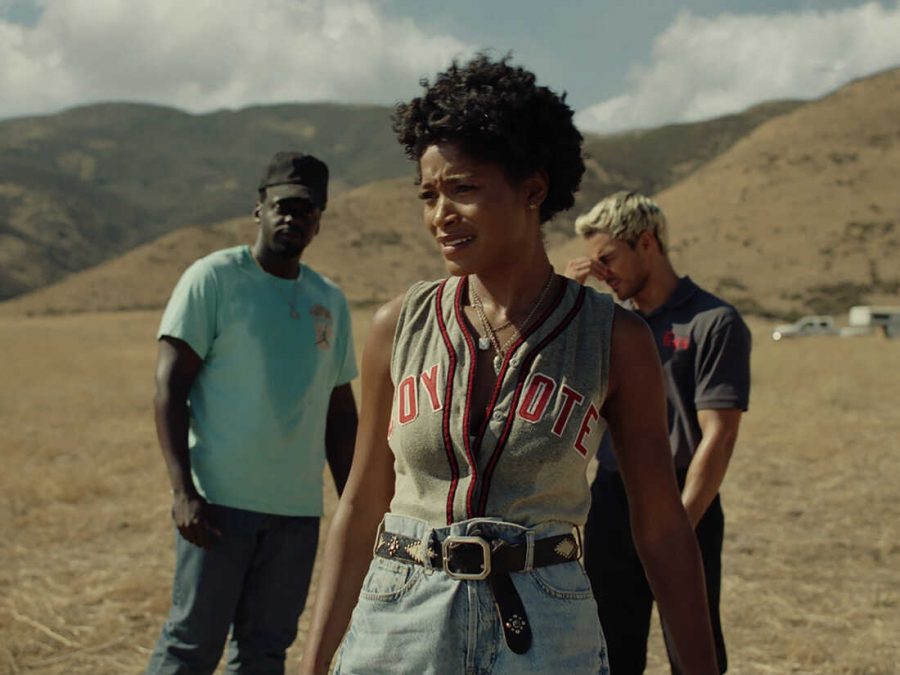 Writer-director Jordan Peele’s mysterious third film, Nope, draws on genre tropes from both alien invasion films and Westerns, but it ends up with something altogether original: a Hollywood spectacle about spectacle.

I loved Nope. I found the first half of the film to be so eerie and beautiful and brilliant and shot through with such disarming humor, I really thought Jordan Peele was on his way to achieving a genre-film masterpiece. Then at the time, it seemed to me the film began to unravel a bit. But now, after thinking about it and talking about it obsessively with fellow film freaks, I’m not so sure it doesn’t work all the way through, with an extraordinary emotional logic that’s hard to translate into analysis.

At the very least, Nope has such great, obsessive qualities about alienation, animals, and cinephilia — all subjects I care a lot about — I knew at once that I was seeing a film made for me. Whether it’s also made for you is between you and your gods.

The film opens with a biblical quote and the mysterious aftermath of a chimpanzee rampage. This was an immediate, dramatic throwing down of a directorial gauntlet. Though Jordan Peele is going around giving interviews claiming that he’s happy if people regard this film as nothing more than a successful summer entertainment, the opening was the kind of announcement of serious ambition that’s rare to see lately.

Here’s the ominous Bible quote — Nahum Chapter 3, Verse 6. God is rebuking the sins of the people of the cruel and corrupt city of Nineveh, capital of the Assyrian Empire, a city that is “the city of blood, full of lies, full of plunder, never without victims!”: “I will cast abominable filth upon you, make you vile, and make you a spectacle.”

What follows is a scene from the set of an old 1990s sitcom, Gordy’s Home, that involves a birthday party for “Gordy” — the chimpanzee star of the show — in which his human “family” keeps bringing him dumb presents, the last one of which is a big box of balloons that float up and burst in contact with the studio lights, which apparently sets off the animal. Later, after the appalling bloodbath, it will be said that the chimp had “had enough,” with no further understanding of why the animal suddenly went into a killing frenzy.

But it’s pretty obvious and follows literally from the quote. The chimp has had enough of the abominable filth cast upon him and being made a vile spectacle. Peele even risks overstating the obvious by having the chimp at the end of the scene pull the shiny conical birthday hat off his head and throw it on the ground.

After the Gordy set rampage, the monkey sits quietly for a moment amid the blood and bodies, and you see behind him the sneaker of one of the mauled cast-member victims. It’s standing up on its heel, toe pointed to the sky, without any natural means of balancing there. What force is holding it up is never explained in the film. Though we later see the sneaker enshrined in a glass case in the backroom museum dedicated to the minor stardom of the only surviving cast member, former child actor Ricky “Jupe” Park (Steven Yeun). He played the small Asian boy named Jupiter, who’s the presumably adopted son of the white sitcom household. He’s become the owner and operator of an old-time Wild West theme park forty miles outside of Hollywood, called Jupiter’s Claim.

And that’s just the first five minutes of the film.

The main plot adds science fiction to the horror typical of Peele movies. It’s a story about a pair of siblings, Otis “OJ” Haywood Jr (Daniel Kaluuya) and Emerald “Em” Haywood (Keke Palmer), trying to keep their family horse ranch operational after the mysterious and sudden death of their father, Otis Sr (Keith David), who’s killed by the sudden freakish phenomenon of small ordinary metal objects raining down from the sky — coins, keys, and the like.

Haywood’s Hollywood Horses is the only black-run animal-training operation providing media-ready horses to the Hollywood entertainment industry. And like Park, the siblings are forty miles outside Hollywood, hanging onto the fringes of the entertainment capital. Even their little horse-wrangler business would be a challenge to maintain in a CGI-dominated industry that’s inclined to forego the use of real animals without the repeated appearances of a UFO spooking their horses and soon doing a lot worse than that. The siblings’ desperate attempts to capture and monetize what they call “the Oprah shot” of the UFO targeting them — the shot that will get saturation media coverage — is part of the film’s major theme about the way we compulsively turn our experience of reality into spectacle.

At any rate, this is the theme Peele keeps referring to in interviews as the hook for the film — it’s about “the human addiction to spectacle,” complicated by the fact that Peele himself is aware of “commenting on this notion at the same time you’re . . . trying to create something that people can’t look away from.”

This naturally sends a few harder-working critics scrambling for a copy of Guy DeBord’s Society of the Spectacle in order to find pertinent quotes like this one:

“In societies where modern conditions of production prevail,” Debord wrote, “all of life presents itself as an immense accumulation of spectacles. Everything that was directly lived has moved away into a representation.”

And sure, that offers some basic help in trying to follow along. There’s also other narrative threads like Em’s Hollywood ambitions, the obsessive cinematographer Antlers Holst (Michael Wincott) who’s persuaded by the Haywood siblings to try to capture the “impossible shot” of the alien creature, and the hilarious Fry’s Electronics tech nerd, Angel Torres (Brandon Perea), who winds up rigging Haywood Ranch for alien surveillance. But there’s a contradiction built in, because Peele is also lamenting the erasure of black contributions to Hollywood history and history in general. To be sidelined from the powerful world of spectacle, or given no credit for participating in it, is a travesty, even though it’s probably a larger curse to be caught up in the modern world of reality-as-spectacle at all. Still, too late to do much about that larger curse now.

But this leaves out the other vital part of the narrative — animals, or nonhuman creatures if you include the mysterious, morphing alien attacking them. Emerging from an eerily unmoving cloud in the sky, this creature in some scenes resembles a mist or a murmuration of birds, sometimes an enormous manta ray, and sometimes one of the more ornate kinds of octopus. And by thinking of the attacking force in the sky as an animal rather than a clichéd alien spaceship, OJ begins to intuit ways to thwart its attacks and even fight back. One of them is not to look at the predatory creature, following from the basic knowledge that it’s a bad idea to stare at animals, since they tend to perceive it as hostile.

It’s important to note that this is a movie divided into chapters named after horses on the Haywood Ranch — horses named in big white letters onscreen, “GHOST,” “LUCKY,” “JEAN JACKET.” Pro tip: whenever directors put something in giant letters superimposed over images, you should probably read those words and try to figure them out, especially when they’re used as a structuring device for the whole narrative. By the final section of the film, the characters are referring to the alien as “Jean Jacket.”

The roster of nonhumans in the film, in order of appearance, are: chimpanzee, horses, and space creatures. They range from animals closest to the human, DNA-wise, to most removed. But the horses — at the midway point of alienation from us, fellow mammals and domesticated but still four-legged and fundamentally different — get the chapter names.

And I’ve never seen a movie that loves horses more than this one. The whole film is astonishing to look at — shot “for immersive action” by Christopher Nolan’s favorite director of photography, Hoyte van Hoytema, on 65 millimeter film in large-format IMAX and Panavision System 65 cameras. But the images of horses in particular are so extraordinary, they’re heart-stopping. There’s a remarkable early night shot that pans past horses moving restlessly in their dark stalls. Their alienness from us, and the strange loveliness of their big fathomless eyes and long heads swaying on arched necks, has an intense atavistic power. The magnificent white horse playing Ghost, who keeps breaking out of the paddock to escape the alien, is captured in haunting ways by Hoytema racing alongside him at full gallop. It’s as if the filmmakers were trying to capture some sort of Essence of Horse, the Platonic ideal compared to which our everyday sense of the animal is of a mere, weak, vague “horsiness.”

“Tell the horse we’re ready,” says the obnoxious director of a commercial to OJ Haywood, who stands holding the reins of his horse Lucky. The assumption that OJ can literally talk to Lucky about the readiness of a commercial film crew, and that the horse would understand him, is funny in its obnoxious cluelessness but also a testament to the sense that OJ is closer to being able to communicate effectively with horses than he is with people. This will wind up being the quality that is his salvation.

It’s also a sideways reference to Zora Neale Hurston’s Tell My Horse (1938), an anthropological study of Haitian and Jamaican voodoo culture with its conflation of the physical with the spiritual, the human with the animal, a system of beliefs that has been continually warped, threatened, and disrupted by colonization. Nope is the kind of movie that makes you alert to tangential media references like this as well as direct ones, such as the shots of the poster on the wall of Buck and the Preacher (1972), a rare Hollywood “black western” starring and directed by Sidney Poitier.

As OJ, the always excellent Kaluuya gives a thrilling performance of stoic minimalism. It’s one of those impressive displays by a great actor demonstrating how little he can do on-screen while still holding you riveted. (It should also be noted that Kaluuya gave up his role in the sequel to Black Panther to star in Nope, for which we salute him.)

There’s a concluding “new Western hero” shot of Kaluuya on horseback, partially obscured by a mist, with a few notes of music evoking Ennio Morricone, that’s both thrilling and unsettling. It’s seen through the eyes of Em, who’s just made inventive use of a camera in “capturing” the alien, as one way she’s shared equally with OJ in the heroic action at the end. While her POV shot of her brother challenges a troubling genre history known for its regressive racial representation, it also seems to aim further than that. OJ seems to be the figure who’s right for a newly conceived, border-melting frontier that’s not about conquest and includes vast mysterious sky as well as rugged landscape and an expanded range of animal life in relationship to the human.

Nope is a tremendous film, evidence of a startling leap forward in Peele’s already impressive abilities as a writer-director. And speaking of spectacle, I need to see it again, in IMAX this time.