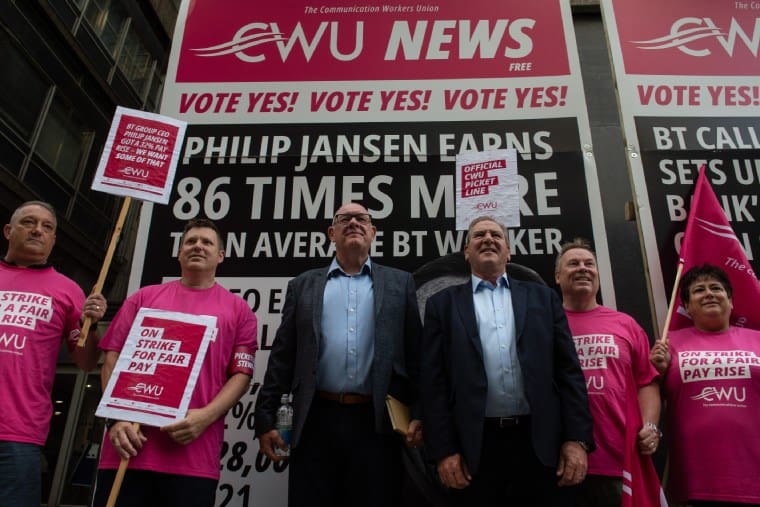 Telecoms workers across Britain marked the next day in a week of strikes over pay with a national strike on Friday.

Workers at BT and Openreach walked out after BT bosses imposed a pay increase of just £1,500 on all workers. It is a real terms pay cut for even the lowest grades.

The action by members of the CWU union was the first national strike across BT since 1987. Workers said it felt good to be out on strike.

Charlotte, on the picket line in Romford, east London, told Socialist Worker, “This is my first time on strike. It feels good to be making a stand—we can’t afford not to strike.”

She added, “We’ve had quite a lot of support and people coming down to support us and it’s not even 9am.”

Workers are also angry that while BT announced massive profits of £1.3 billion—and awarded its top boss Phillip Jansen with a mega salary of £3.5 million a year—it claimed it had no money to give them a proper pay increase.

Terry, an Openreach engineer, was on a picket line outside Colombo House in south London. He told Socialist Worker, “We worked through Covid, and they gave us some extra money last year but there was no pay rise involved in that.

“The top man takes a 32 percent pay rise and just gives £1,500 across the board for everyone no matter what the grade. If you’re an apprentice you might think that’s lovely. But for someone else it’s just 3 percent.

“That seems to be the way it’s going now. It seems that living standards are getting eroded and the gap is getting bigger and bigger. They’ve got money to keep the shareholders happy but not the workers.”

Other strikers pointed out that support for the pay strike fed off anger that had been building up for years, with attacks on jobs and conditions too.

The action comes after a group of highly skilled Openreach engineers struck last year over attempts to change their contracts and pay grade. And BT bosses narrowly avoided a strike across the whole of the company when union leaders signed a deal to hold off action.

Jas, an engineer at BT Tower in central London, told Socialist Worker, “I’ve been here 34 years. And in general there’s been a collaborative approach between the union and management. But what we’ve seen from Philip Jansen has just been about conflict.

“From day one he’s been looking to smash terms and conditions we’ve had for years.”

And Darren Weller from CWU Capital branch said, “BT used to be a prestigious place to work because of the terms and conditions. But now, especially with our low paid members, the call centre workers, the attrition rate, the turnover of staff, is unbelievable. Nobody wants to work here anymore. It’s not a good place to work.”

In striking, many workers had defied attempts by top bosses to frighten them out of taking action. Managers spent the week before the strike ringing round workers asking whether they were striking. At the Southwark telephone exchange in south London, two BT managers told Socialist Worker they’d come to “observe” the picket line.

Bosses also sent an email saying it was “unacceptable” for people to tell others what to do on strike days. And they locked CWU reps out of BT Tower.

Darren added, “They say the strike doesn’t bother them but obviously it does because they’ve stopped us going into the building. They’ve been calling people everywhere, having one-to-one meetings with people.

“They told one young chap here he was being told to come in because he wasn’t part of the union. He wasn’t aware he didn’t have to.”

Workers are set to strike again on Monday. It feeds into a bigger battle over pay that’s building momentum. The action follows another successful strike by rail workers in the RMT union on Wednesday, and a train drivers’ strike set to take place on Saturday.

He criticised the Labour Party. This week the leadership sacked MP Sam Tarry as a shadow transport minister for joining a picket line and saying workers should get pay rises in line with inflation.

“I hope the Labour Party wakes up, but we can’t wait for them,” said Ward. “They will pay the price for what they are doing. They will not achieve electoral success on that basis. But that’s not the focal point for us.”

One striker at Colombo House told Socialist Worker, “This is happening all around the country—there have been the rail workers as well. Other people are talking about having their own strikes. This is probably just the tip of the iceberg.”