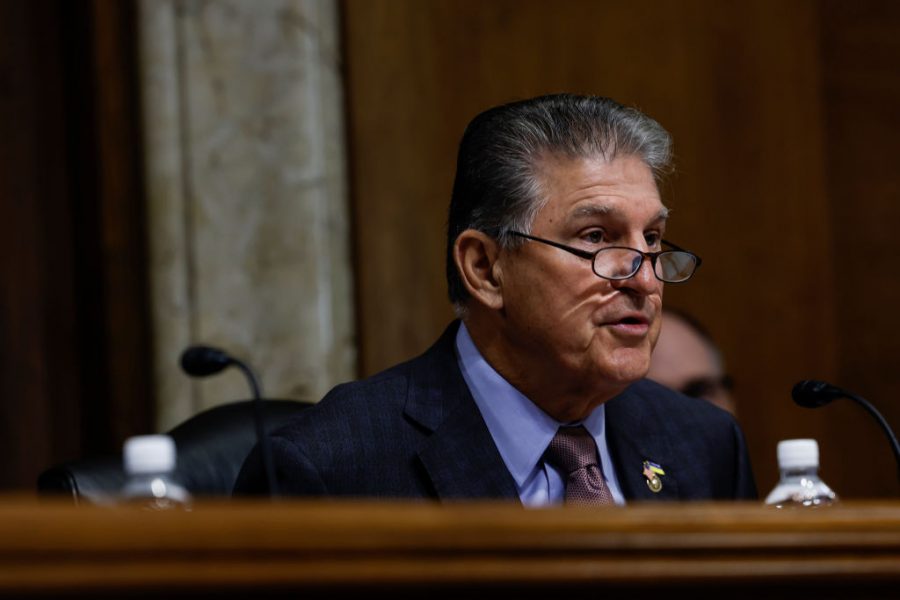 Biden’s climate bill is better than nothing — but just barely. “It’s a renewable energy revolution on top of a fossil fuel build-out,” says one climate advocate: in other words, a historic clean energy investment chained to a fossil fuel giveaway.

Suddenly, all eyes are on the Inflation Reduction Act (IRA), the proposed compromise bill between Senator Joe Manchin (D-WV) and Democratic leadership that would enact a scaled-back version of President Joe Biden’s dormant climate ambitions. But is the IRA a bold, near-miraculous breakthrough in the fight against the climate crisis? Or an inadequate set of poison pills that could make the crisis worse?

The answer, according to environmental groups? It’s complicated.

“I’ve come down on the feeling that it is okay,” says Patrick Bigger, research director at the Climate and Community Project. “There’s some good stuff, a lot of bad stuff.”

The most exciting thing for climate campaigners is the top-line investment: a massive $369 billion in climate and energy spending, which modeling says will cut US greenhouse gas emissions by 40 percent from their 2005 peak by the end of this decade. The sum would make up the largest single piece of climate investment in US history, four times larger than the climate provisions in Barack Obama’s 2009 stimulus, according to Dr Leah Stokes, a professor of climate and energy policy with the University of California, Santa Barbara, who advised congressional Democrats on the bill.

“It’s a lot of money,” says Greenpeace USA senior climate campaigner John Noël. “A lot of money being shot into the clean energy space, which is what we’re being told is necessary to break the logjam.”

Climate campaigners are most excited at the prospect of using the historic sum to build out the US domestic clean energy industry, whether by extending wind and solar tax credits, tax credits for buying electric vehicles, or through the $500 million set aside to make heat pumps and process minerals essential to renewable technology. They also point to provisions like the $10 billion for rural electric cooperatives to buy renewable energy systems, the $30 billion worth of grants and loans for states and electric utilities, and a variety of tax credits and rebates for private companies and homeowners to build new facilities and install energy efficient and clean energy technology, just a few in a long list of measures the bill would fund.

“Every single dollar that goes to renewables is a good thing,” says Jean Su, Energy Justice Program director with the Center for Biological Diversity (CBD).

There’s also a panoply of smaller, nonenergy-investment-related provisions that would make a dent in the climate flight and go toward fixing its human toll, like a fee on excess methane leaks, a coal tax to permanently fund the Black Lung Disability Trust Fund, and a program helping industrial firms pay to reduce pollution from their plants. One of the bigger sums, $60 billion, would go to helping low-income communities especially hit by climate impacts.

It’s hard to believe that Manchin, a literal coal baron, would go along with all this, given how “disturbed” he’s admitted to being by the idea of eliminating his carbon-producing gravy train. But that in itself is a clue about the many and serious inadequacies of the bill.

The most alarming problem is the bill’s mandating what is in effect a decade-long carbon bomb through oil and gas leases. If passed, any new wind or solar projects on public lands or waters would have to first offer, respectively, at least 2 million acres and 60 million acres of each for oil and gas leases — and that’s every year, for an entire decade. It would also revive Biden’s outrageous failed attempt to carry out the largest oil-and-gas lease sale in the country’s history, which a judge had blocked earlier this year for failing to properly account for the disastrous climate impact.

Others were less polite, calling the proposed pairing “deranged” and “madness.” Brett Hartl, government affairs director at the CBD, called it a “climate suicide pact.” It’s not hard to see why: not long after the bill’s announcement, an Associated Press investigation was published revealing that hundreds of lease sites in the Permian Basin alone are every hour leaking between hundreds and thousands of kilograms worth of methane, a greenhouse gas dozens of times more planet-boiling than carbon dioxide. And that doesn’t even count the emissions from drilling, extracting, and eventually burning the fuel within.

Completely gone, too, is any funding whatsoever for high-speed rail and public transit, even as the United States’ car-heavy transportation system is its single biggest source of greenhouse gas emissions, with more than 80 percent of those coming from road travel. This is already after the physical infrastructure bill Biden signed into law last November poured hundreds of billions of dollars into fossil fuel–reliant infrastructure like roads, highways, and airports.

“The bill is entirely premised on maintaining and entrenching automobile dependence in our society,” says Yonah Freemark, senior research associate in the Metropolitan Housing and Communities Policy Center at the Urban Institute. “People are simply told to buy a car and nothing else,” he says

Freemark argues that Democrats are also missing an opportunity to top up funding for cash-strapped public transit agencies, which are heading for a fiscal cliff thanks to a collapse in ridership over the pandemic and have only been kept afloat by rounds of federal aid. The impending end of that federal assistance will mean eventually cutting service or raising the fare price, both of which would drive commuters away from public transport, further feeding the climate crisis.

“Addressing environmental concerns goes beyond electrifying automobiles,” he says. “It has to mean a transformation in our communities as a whole.”

The bill doesn’t exclude all transport though. It does put a significant amount of money behind “sustainable” and “low-emission” aviation, even as a recent report found that the use of this fuel made virtually nonexistent reductions to airlines’ fuel consumption. And it puts more funding toward a carbon-capture solution, despite the fact that a recent examination of forty carbon-capture technologies found that thirty-two emitted more carbon than they actually took in.

Meanwhile, as part of the price of Manchin’s vote, Democrats have committed to carrying out permitting reform in a separate bill later this year, to make approval of fossil fuel infrastructure like pipelines quicker and easier. Some argue that this will benefit clean energy too.

“In terms of forestry, agencies have been starved by years of austerity and don’t have the administrative capacity to make things turn over on the scale we need them to,” says Bigger.

But others warn that there’s a reason why the industry so eagerly pushed for this provision.

“It’ll help renewables, but it will disproportionately benefit fossil fuel companies, and that’s a very dangerous place to be where the public is being stripped of protected statutes to challenge fossil fuel development,” says Su.

“If that reform means expedited and streamlined pipelines and crude and liquid natural gas export facilities, that would be a disaster for the climate,” says Noël. “If you’re still exporting that much fossil fuel, it does not matter how many electric vehicles are produced domestically.”

After months of despair over the defeat of Biden’s climate agenda, the excitement and relief that something meaningful and historic might get done on climate may be distracting attention from how much has been lost.

The original Build Back Better bill already fell far short of the $1-trillion-a-year investment that organizations like the Roosevelt Institute estimated was needed this decade to slash emissions, making it an eighth-measure. At less than half of even that, the IRA’s spending technically makes it a less-than-one-sixteenth measure. All the while, the bill is being touted as a deficit-reduction measure.

Looked at in relative terms rather than isolated top-line figures, the spending commitments look far less ambitious. The bill, for instance, puts $200 million toward vegetation-management projects on National Forest System land for source watersheds, something that Bigger estimates would cover 300,000 acres if using the very lowest-cost treatment. But there’s a total of around 65 million acres that need restoring, he says.

This has led some to scrutinize the figure of a 40 percent emissions reduction. Rhodium Group, the research firm behind the modeling that produced that figure, has itself noted that while it estimates the IRA would cut emissions 31-44 percent below 2005 levels by the end of the decade, existing policy — where the US government does little to nothing about impending planetary catastrophe — would get to 24-35 percent by that same time anyway, making the bill’s impact surprisingly modest.

At the same time, the bill has been stripped of its more coercive regulatory measures, like the Clean Electricity Standard that Biden’s own climate adviser said was one of the “bottom lines” of a climate package, and which was once viewed as the “key” to his entire plan.

“Part of the problem of the approach we see in this bill is it’s all carrot and no stick, so it’s kind of arbitrary whether the private sector takes up what’s in the bill and fulfils the promises of it,” says Jones. Even Stokes, who played an instrumental role in the IRA and has called it a “game-changer,” has previously made this point about the need for “sticks” in climate policy, because “we need everybody to be doing the right thing at the pace and scale that’s necessary.”

Climate campaigners stress the importance of avoiding both extremes of doomerist cynicism about the bill and greenwashing triumphalism. Being clear-eyed about the messy, contradictory reality of the IRA — that it would be at once a historic, critical step toward preventing climate catastrophe, and an inadequate effort that could make that catastrophe worse — points the way to the next steps in tackling the crisis and may help climate activists build a public case for more aggressive federal action to follow.

“This package is a hostage situation where we can’t get any of the good if we don’t get a good dose of bad,” says Su.

“The strongest version of this bill should pass, and then President Biden should take action and declare a climate emergency and constrain the fossil fuel industry, to remedy all these Manchin poison pills,” says Noël. “It would be unfortunate if Biden viewed his job on climate as complete after this clean energy bill passes.”

Emotionally drained climate experts have correctly concluded that, after years of denial and delay on climate and the last twelve months of dashed hopes, the IRA is better than nothing. But that doesn’t mean we have to settle for it.